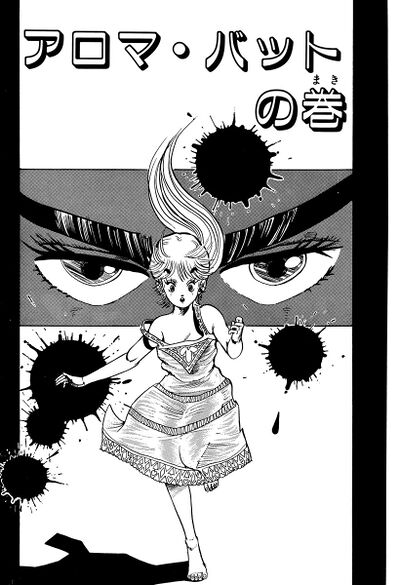 "Aroma Bat" (アロマ・バット, Aroma Batto) is the sixth chapter of Baoh the Visitor.

The cyborg named Dordo (ドルド, Dorudo) watches the house until the clock strikes midnight. The old man wakes up and tries to shoot Ikuro, who transforms into Baoh but senses that the old man is not his true enemy. Jumping through the roof, Baoh confronts Dordo who disables all of his sensory organs through chemicals released by a swarm of bats. Thankfully, the old man, who has come to his senses and guided by Sumire, shoots down the bats while taking a bullet. Baoh confronts Dordo, who is heavily wounded, but reveals his heavily modified body. He kidnaps Sumire to use her as bait and escapes with a deltaplane to one of the Dress' headquarters near Sanriku. Ikuro is determined to free Sumire, but risks unleashing the beast inside of him for good.