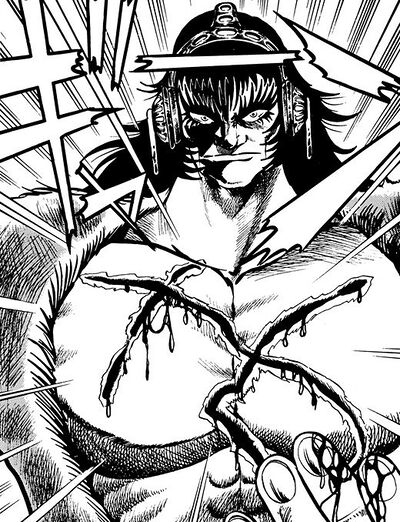 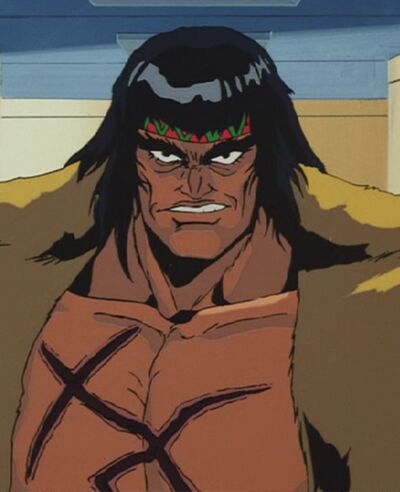 Body cut by a laser via Ikuro Hashizawa

Baoh (OVA)
“
It's useless... Anything that approaches me... Living things! Any kind of matter! Everything returns to dust...
”
—Walken, Baoh Chapter 9: Demon Walken

He's an assassin working for the Dress Organization and is the last known member of the Native American Skookum Tribe.

Walken is a tall, heavily built Native-American with long unkempt dark hair. He constantly bears a severe and angry look on his face, enhanced by his thick and spiky eyebrows and sharp teeth. Walken has plain pants, but wears a pelt jacket leaving his muscled chest and stomach exposed, and wears arm guards.

He wears special headphones that suppresses his psychic power.[2] In the OVA, he instead wears a bandana.

The series is known for alternating colors between media, the information presented below may or may not be canon.
Skin(Tan)
Hair(Black)
Eyes(Brown)
Outfit
(Yellow pelt jacket, brown pants, blue gauntlets, red and green headband, black shoes)

“
Boy... I hold no resentment or anger toward you, myself! But I am a warrior! Fighting is everything... Killing is what life is all about...
”
—Walken, Baoh Chapter 9: Demon Walken

As a member of the Skookum Tribe, he is a warrior by blood and thinks that he must seek worthy opponents, taking Baoh as one of them. If he acknowledges his opponent to be a true warrior, he carves a marking in his chest with his finger to denote so. The blood marking symbolizes respect, courtesy, and death, toward his opponent in battle. As a willing agent of Dress, Walken is also ruthless and doesn't hesitate to gruesomely execute the assassin Dordo for his failures, shaking every molecule of the cyborg's body.

When his full power is released, he becomes extremely violent, killing everyone around him and only seeks revenge against Ikuro.

Walken is recognized as the most powerful psychic on Earth. His psychic powers are so massive that they allow him to manipulate matter at the molecular level and also on a large scale. He possesses the following psychic abilities.

Walken can manipulate matter with his mind and use it to liquefy and disintegrate matter by vibrating molecules. He thus possesses a powerful defensive technique against projectiles he can see coming but also a powerful offensive technique allowing him to mold anything he touches at will.
Molecular Vacuum Wave(分子空動波 Bunshi Kūdō Ha)

Walken creates a sphere of vibrating air molecules and throws it at his opponent to disintegrate them.
Molecular Seismic Wave(分子地動波 Bunshi Chidō Ha)

Walken liquefies the ground beneath him to trap his opponent. He can also do this with walls. This powerful ability allowed him to smash through solid bedrock leading to an underground cavern.
Clairvoyance

Walken can foresee the location of any person, which he can use to locate enemies of Dress.
Superhuman Endurance

Walken also possesses athletic abilities beyond the range of normal human beings. He was able to withstand a current of 60,000 volts from Baoh's Break Dark Thunder and also live through one of Baoh's arm blades planting itself in his skull.

Walken is the last survivor of the annihilated Skookum Tribe of American Indians. At some point, he starts working for the Dress organization.[2]

Walken tells Dr. Kasuminome that he would like to fight Baoh.[3] He later appears with Kasuminome to meet a terrified Sumire who can sense his power. He demonstrates his abilities by boiling a cup of coffee by merely holding the cup.[4] When Dordo is taken back to the Dress organization's laboratory, he is executed by Walken for his failure and is atomized into dust. Baoh eventually arrives at the laboratory and fights his way inside until Walken appears. Walken scars himself to pay his respect to a powerful fighter, and attacks. He sends a ball of destructive energy at Baoh, who narrowly avoids it and tries to shoot with his hair needles. However, Walken atomizes the needles with his powers. He starts boiling the floor and Baoh tries to escape through a hole in the wall that Walken created. However, Walken makes the wall boil and closes the hole on Baoh's arm. Baoh uses his Break Dark Thunder technique to shock Walken. Despite being immobilized, he withstands the electrocution. Nonetheless, Baoh manages to pierce Walken's brain by launching one of his arm blades and Walken collapses.

Walken eventually wakes up, still alive despite his injury, and seeks Baoh for revenge. As the headgear restricting his psychic powers was destroyed by Baoh's attack, the full strength of Walken's abilities causes an earthquake inside the facility. Walken rampages through the laboratory, killing several scientists. Walken eventually finds Ikuro and Sumire, blasting through 31 steel shutters to reach them, and then destroys the floor. All of them, as well as Dr. Kasuminome who tried to escape in a pod, find themselves in a cavern. Baoh uses a laser cannon to kill Walken for good, unintentionally fatally wounding Kasuminome in the process. The facility then self destructs, causing the cavern to collapse.[2]