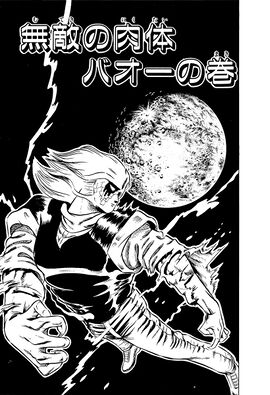 A death squad is shown searching for Ikuro and Sumire , who are busy betting on horse races to acquire money. Meanwhile, Dr. Kasuminome explains to his sponsors how deadly the Baoh, a parasite granting supernatural strength and several other abilties to even the weakest organisms the longer it stays inside of them. To demonstrate its potential, he pits a little Baoh dog against a tiger, a battle which Baoh wins. If Ikuro were to fully develop into a Baoh, he would wreck havoc upon the world and turn everything into a Baoh. Meanwhile, Ikuro and Sumire have settled inside an abandoned building, Ikuro sensing that something inside of him is changing. The death squad attacks the duo, but Ikuro transforms again into Baoh, decimating the squad. Unbeknownst to him, he is observed by another assassin.