Another One Bites the Dust, Part 5 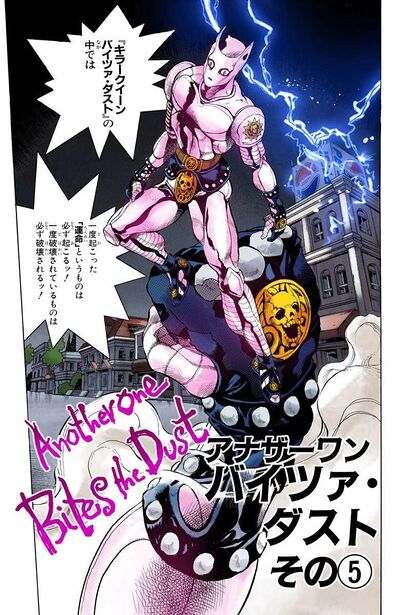 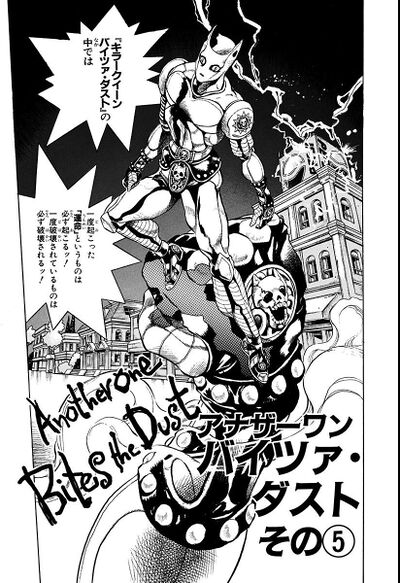 Another One Bites the Dust, Part 5 (アナザーワン バイツァ・ダスト その⑤, Anazāwan Baitsa Dasuto Sono 5), originally He Has Friends! (仲間がいたんだ！, Nakama ga Itan Da!) in the WSJ release, is the one hundred fifty-seventh chapter of Diamond is Unbreakable and the four hundred twenty-second chapter of the JoJo's Bizarre Adventure manga.

Lightning strikes a Pepsi sign on a nearby building. Hayato watches in tears as Rohan explodes. In the ghost alley, Reimi is horrified to see Rohan's spirit passing through. Kira tells Hayato that Bites the Dust will not harm him but will be triggered if anyone tries to get information out of him. He heads to work, leaving Hayato in despair.

Moments later, Koichi asks Hayato for the time. He wonders for a second if he knows Hayato, but dismisses the thought when Hayato tells him they have not met. Hayato catches a glimpse of the picture Koichi is holding, a photo of him spying on his "father." He realizes that Koichi and Jotaro are the allies Rohan was waiting for, and that they are searching for him in their investigation. Knowing that Bites the Dust will activate if they try to learn anything from him, he turns to run, but bumps into Josuke and Okuyasu, who have arrived late because Josuke overslept.

Josuke stops Hayato and he ends up trapped in the middle of the group. Josuke returns the hat he dropped when they collided, and the group soon realizes that Hayato is the boy in the photograph they are looking for. They question Hayato, who begins to panic.