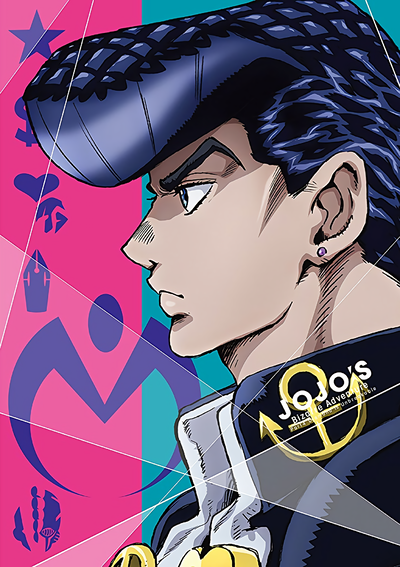 Josuke and Koichi are walking home from school when they spot Okuyasu sitting at Café Deux Magots, seemingly writing something. Out of curiosity, they approach their friend, who is surprised and starts swallowing the letter he was writing. However, Josuke uses Crazy Diamond to make him puke the pieces he had eaten and starts reading it, realizing it's a love letter.

Okuyasu admits he's got a crush on the woman working there. One time when Okuyasu was sitting by himself at the café, it began to rain, so the waitress brought him an umbrella, and he fell in love due to this act of kindness. Touched by his burning feelings, Josuke and Koichi decide to help him. They suddenly stop talking when the waitress asks them what they wish to drink; Josuke asks for a Cola, Koichi orders a black tea, and Okuyasu a milk tea.

While discussing how to approach the girl in question, Okuyasu notes that Josuke is quite the hit with the girls at school, though Josuke hadn't realized this. Following that logic, Okuyasu proposes that they act out how to talk naturally with a girl, so they start acting out a scene.

Koichi acts as the waitress, who’s running late to work, while Josuke plays a student who offers to accompany her through a shortcut by the station. Josuke's natural charisma allows him to say charming lines. Okuyasu becomes moved by the scene but concludes that he can't match Josuke's speech. He decides to make a second roleplay, but with Koichi as the man and with the more romantic scenario of the man saving the girl from danger just as the waitress arrives with their drinks. After she leaves, they start acting out the second scene. The trio offhandedly notes that a lot of students are starting to sit at the shop.

This time Koichi is the student that saves Josuke (now posing as the woman from the café) from a fake truck that’s about to hit her, hurting his leg while doing so. At that moment, Okuyasu says that it begins to rain, so Koichi proposes to take shelter somewhere. Okuyasu gets carried away with their acting and says that a lightning bolt almost strikes them, then that a plane suddenly falls down upon them, and then that gunfire hurts Koichi when protecting the lady. Josuke stops the scene due to them going too far with the roleplay and points out that they're making a scene since Echoes was also producing sounds to make it more realistic. The other clients also begin to leave.

Okuyasu decides to go inside the shop and convey his feelings, but he bumps into the waitress, and she drops her tray. Okuyasu quickly uses The Hand to get it back, starts a genuine conversation with her, and says that he's been coming to Café Deux Magots for a reason. Josuke and Koichi eagerly observe Okuyasu's confession. But when he is about to confess, he ends up saying, “I really love... milk tea”. The conversation ends awkwardly as the waitress returns to the counter, thinking that Okuyasu wants another milk tea.

Depressed that he couldn't tell her how he feels, Okuyasu sits and starts crying with his friends, asking them not to say a thing and lamenting that he acted so weirdly with her. He wishes he could peek into her heart and know what she thinks of him. Incidentally, Rohan Kishibe makes himself known. He has overheard everything, and so he can finally work on his manga in silence, he accepts to use Heaven's Door on the waitress.

Rohan reads the waitress' bio. Her name is Rika Tachikawa, 20 years old, and she is a college student from downtown. Rohan reads on but doesn't find anything about Okuyasu, so he changes her back to normal and asks them not to bother him further. Rika awakens without remembering what transpired and happily attends to Rohan, who asks for a coffee and gives her an autograph.

The group is shocked after watching how she treats him, seemingly having feelings for Rohan. Even worse, Rika doesn't mind that Rohan ignores her for his work, Okuyasu starts crying again. By the end, Josuke and Koichi try to cheer him up by inviting him to Tonio Trussardi's restaurant, which consoles Okuyasu a bit.