A Little Story From the Past 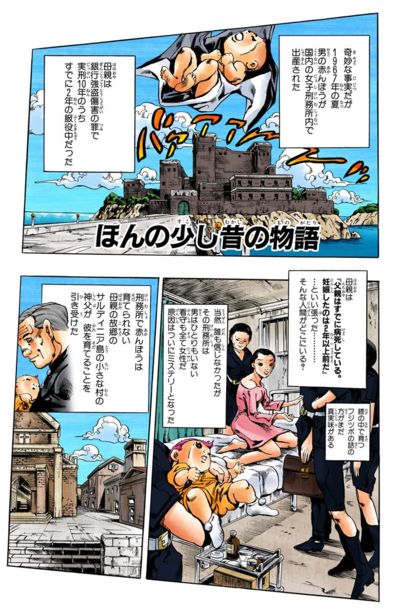 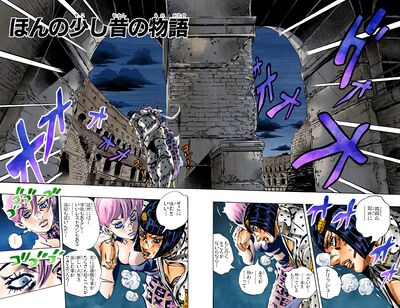 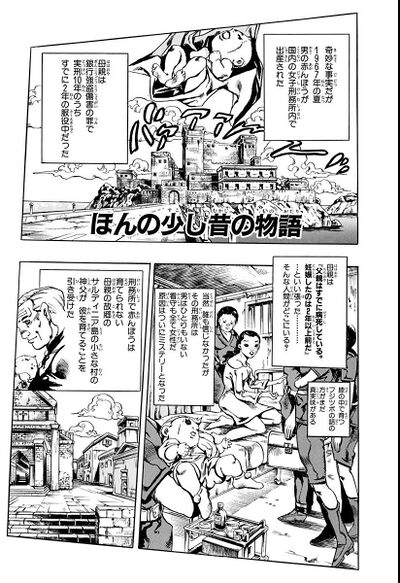 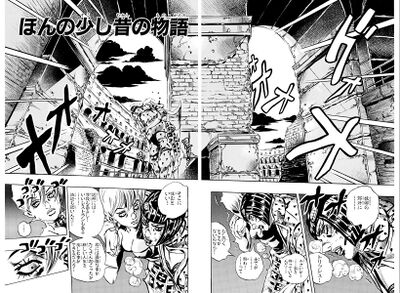 A Little Story From the Past (ほんの少し昔の物語, Honno Sukoshi Mukashi no Monogatari), originally A Tale from Long Ago!! (昔話!!, Mukashi Banashi!!) in the WSJ release, is the one hundred thirtieth chapter of Vento Aureo and the five hundred sixty-ninth chapter of the JoJo's Bizarre Adventure manga.

A flashback details the past of a certain person.

In 1967, a baby was born inside an all-women prison, whose prison guards were also women. The mother was inside the prison for 2 years already and never saw a man since her entrance, making the birth a mystery. A priest of Sardinia adopted and raised the child, who grew into a timid and dim teenager but was also easygoing.

At the age of 19, the young man was seen by the priest walking in La Costa Esmeralda with another woman. Deciding that his son was big enough to get a car, he began to build a garage near the young man's room. Digging into the concrete, the priest discovered the man's mother with her mouth sewn shut, who had been kept alive there for years. That night, a fire consumed the whole village and among the registered names was the man's name: Diavolo.

In the present, Doppio walks with Bucciarati in the Colosseum, until Polnareff suddenly orders them to stop moving. Doppio hides his face while Bucciarati presents himself. Polnareff is suspicious of the unknown figure near Bucciarati and asks who it is. Bucciarati mistakenly answers that it's Trish, who is unregistered in the gang but has proven herself to be trustworthy. Polnareff is still suspicious and demands that "Trish" shows her Stand. Diavolo, hearing that the man is an experienced Stand User, takes a look and identifies Polnareff holding an Arrow.

Another flashback details Polnareff's whereabouts in Europe. After defeating DIO in Egypt, he collaborated with Jotaro to track the Arrows. Going to Italy which was suffering from a rise of criminality, Polnareff infiltrated Passione and met Diavolo. As he was unable to contact Jotaro and underestimated Diavolo's power, the latter almost killed Polnareff and crippled him, leaving him for dead.

Polnareff notices that Bucciarati's companion has suddenly disappeared and suspects the worst.