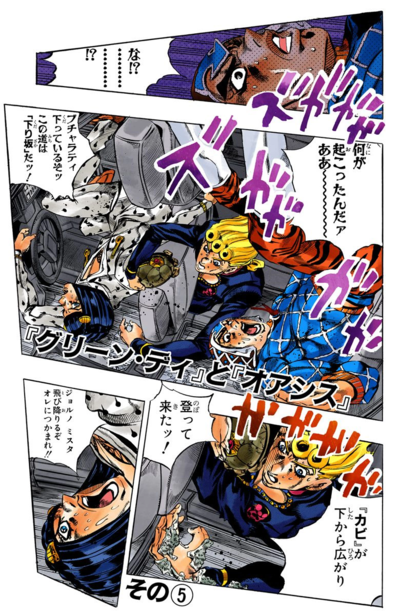 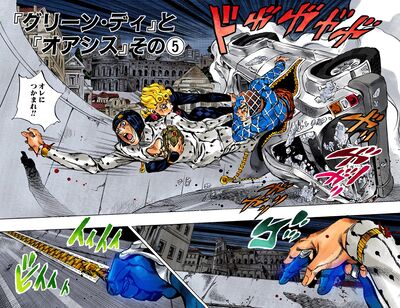 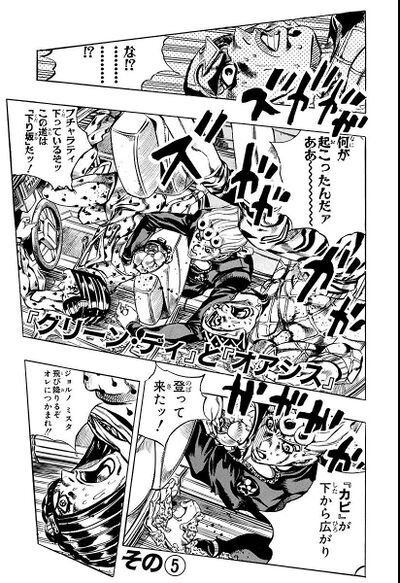 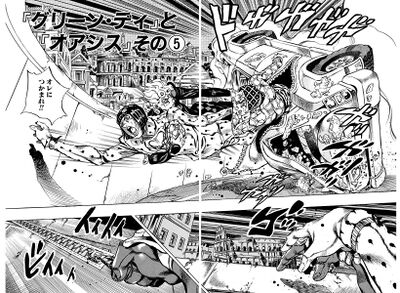 "Green Day" and "Oasis", Part 5 (『グリーン・ディ』と『オアシス』 その⑤, "Gurīn Di" to "Oashisu" Sono 5), originally Panic in Rome!! (パニック・イン・ローマ!!, Panikku in Rōma!!) in the WSJ release, is the one hundred nineteenth chapter of Vento Aureo and the five hundred fifty-eighth chapter of the JoJo's Bizarre Adventure manga.

Now in direct contact with the mold and going down a slope on an uncontrolled car, Bucciarati's group is forced to jump out of the car. They watch with horror the mold infecting Rome, which has a population of 3.8 million inhabitants; risking an hecatomb and moreover risking to kill their ally.

The corpse having fallen from an helicopter piloted by Cioccolata, Mista tries to shoot it down only for Secco to emerge out of it, deviate the bullets with his hands and dive into the ground. The helicopter flies away, Giorno wants to pin it down, but Mista tells that it has gone of Sex Pistols' range.

Giorno imbues the bullets with life thanks to Gold Experience, and shoot the bullets into a tower, they transform into a tree and effectively tie the helicopter. Giorno and Mista go fight Cioccolata, entrusting Secco's defeat in Bucciarati's hands.