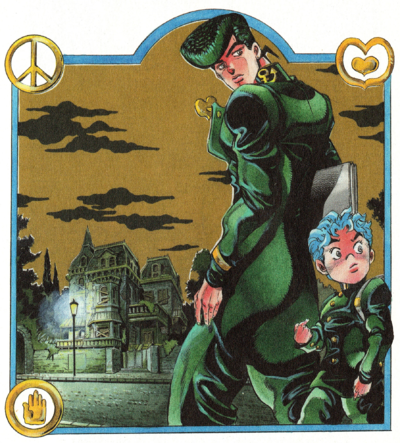 It narrates the battle between Josuke, Okuyasu Nijimura and Keicho Nijimura, two brothers who are both Stand Users, but also the artificial awakening of Koichi's Stand because of the Arrow and its subsequent theft by Red Hot Chili Pepper.

Koichi and Josuke stumble upon an abandoned house. When Koichi opens the gate, a student emerges from the house and slams the gate in his face - Okuyasu Nijimura. Okuyasu's brother then shoots Koichi with a Bow and Arrow hoping to awaken his Stand, but the arrow pierces Koichi's flesh and he appears to faint. Okuyasu stops Josuke from healing Koichi and fights him with his Stand, The Hand, which can erase space.[1] However, Okuyasu knocks himself out by accidentally teleporting flower pots towards his face.[2]

Meanwhile, Jotaro reveals that Enya the Hag had the Bow and Arrow which gave DIO his Stand. Jotaro wants to destroy the Arrow so that there will not be another Stand like The World.

Josuke enters the house and Okuyasu's brother is revealed as Keicho Nijimura. Okuyasu re-enters the house, saying that he has not been defeated, only to be pierced many times by an unknown source. Josuke evades the holes and tries to find out what Keicho's Stand is. Okuyasu refuses to tell him but Josuke heals him anyway. Okuyasu is grateful for what Josuke did and teleported Koichi closer to them.[3]

Josuke heals Koichi and then gets attacked by Keicho's Stand - Bad Company - many miniature troops.[4] They were the ones who created the holes earlier. Koichi is able to see the Stands which means he has become a Stand user. Keicho surrounds Koichi and Josuke with his troops and attacks Koichi in order to awaken his Stand, thinking that it may be the Stand he is looking for.[5] Koichi's Stand is revealed to be an egg and when Keicho attacks the egg Josuke kicks it away, separating him and Koichi. Keicho reveals his plan to first crush Josuke's legs, then his hands and then his skull. Koichi tries to attack Keicho with his newly-acquired Stand but Keicho knocks him away. The first to stages of Keicho's plan proceed as planned and Josuke cannot move. Keicho uses all his troops in the final attack but Josuke uses his Crazy Diamond to restore the broken missiles to their original form - and shoot them back at Keicho.[6]

After Keicho is defeated, Koichi wants to destroy the Bow and Arrow so that no one else will be killed and he discovers a room with a monstrous creature in it - along with the Bow and Arrow. Keicho enters the room and says that he is his father.[7] Ten years ago, when the Nijimura family were in a bad economic condition, Keicho's father sold his soul to DIO in exchange for money. But DIO didn't trust him and implanted his cells inside of him, making him turn into a beast. Since then he has been rummaging in a box and then crying every day. Keicho wants to find a Stand user that can kill his father so that he can die like a man because whenever he tries to kill him he just regenerates.

Josuke restores the box that Keicho's father has been rummaging through and reveals that he has been trying to piece a picture of the whole Nijimura family together. Josuke tells Keicho to try and find a Stand user that can heal his father instead of killing him.[8] Josuke wants to destroy the Bow and Arrow but Keicho is unwilling to give it up. Okuyasu joins the persuasion until a Stand comes out of the outlet and tries to steal the Bow and Arrow from Okuyasu's hands. Keicho knocks him away and the Stand, who introduces itself as Red Hot Chili Pepper, absorbs Keicho into the electricity, killing him.[9]