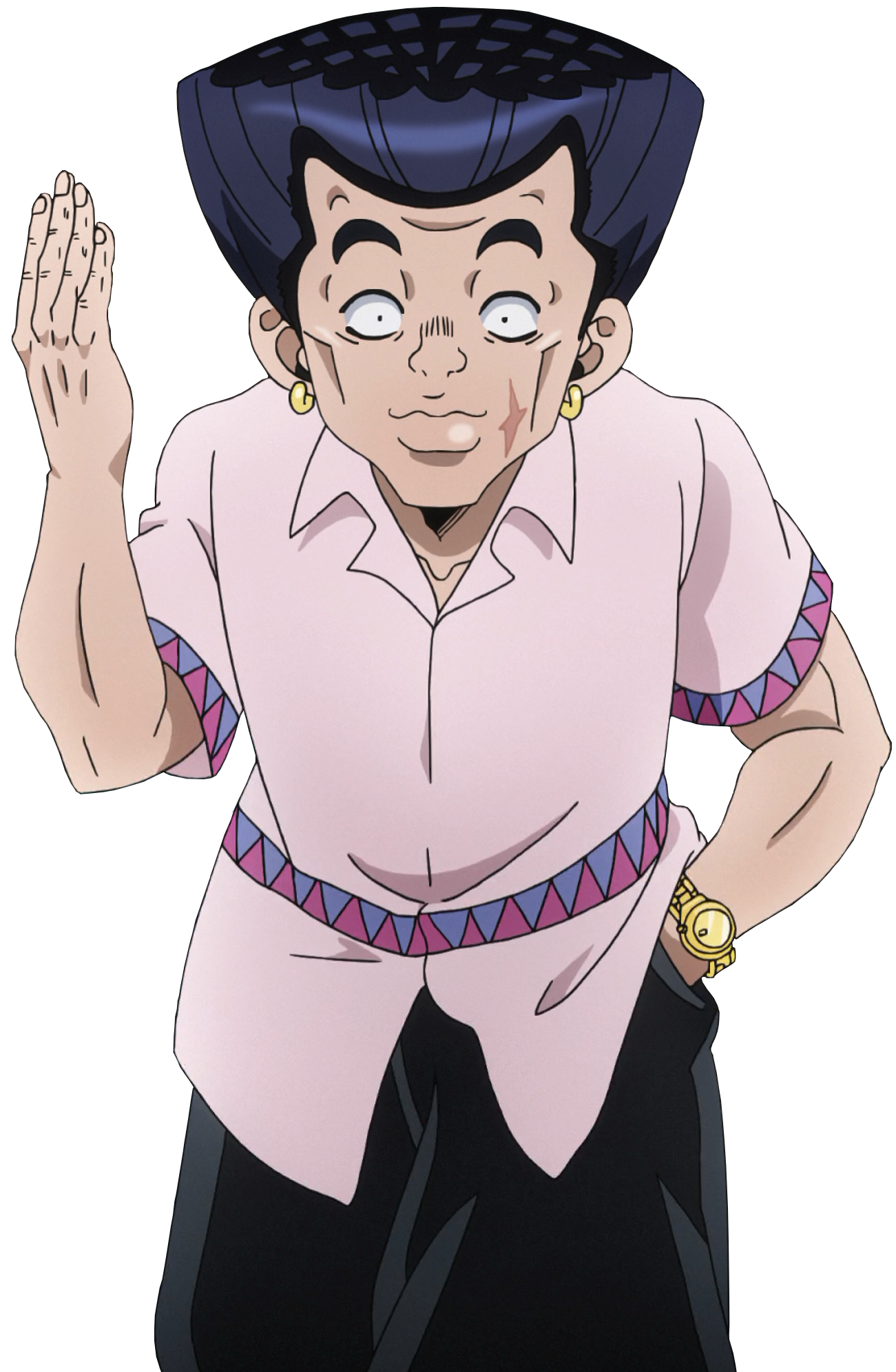 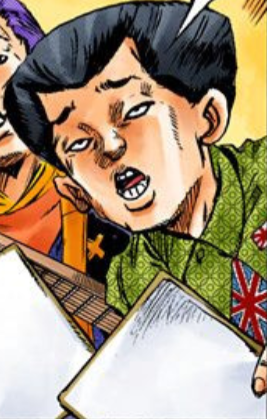 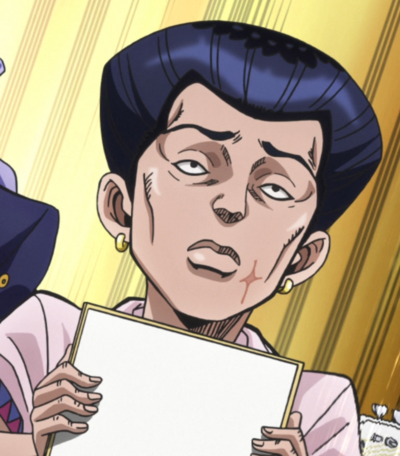 Tamami is a petty scammer who tries to swindle Koichi but is eventually neutralized. He subsequently becomes a tertiery ally and works legitimately as a debt collector. His Stand is The Lock.

In the manga, he has two distinct appearances, with one turning into the latter by the end of his introductory story arc.

Tamami initially appears as a tall and intimidating man. With pronounced epicanthic folds, he wears hair of dark to medium tone combed in the manner of a pompadour into a sort of thick helmet; and he has a small cross-shaped scar beyond the bottom-left corner of his mouth.

He wears dark, baggy pants, casual business shoes, a wristwatch, earrings and a button up polo, which appears in two different designs throughout Part 4. It first appeared with the English flag on his left breast, the Swiss flag on the right collar and the Italian flag on the left, however, the anime depicts the left collar flag as the Netherlands. The other design has a row of patterned triangles circled around his waist and sleeves.

Throughout the Koichi Hirose (Echoes) story arc, Tamami is seen gradually shrinking. By the end of the arc, he is around Koichi's height and retains this height for the rest of Part 4.

In the anime, Tamami is always portrayed as short in stature.

Tamami Kobayashi is a sly hustler with a despicable personality.

Tamami is defined by his activity as a con man, his specialty being tricking people into feeling extreme guilt so that he can pressure them into giving him money. As a con man, Tamami doesn't use violence but trickery, which is reflected by The Lock having no offensive ability whatsoever although it increases the guilt of his victims.

As a con man, Tamami is also avaricious and generally unpleasant. He's notably a con man because he prefers to hustle people and easily get money, and has no qualm hustling people who can't pay what he demands of them (when Koichi told him his money was for buying the necessary sneakers for his physical education, Tamami told him to go barefoot). When he had a grudge against Koichi, Tamami even planned to take the Hirose Family's house for himself. Even after he turned a new leaf, Tamami became a loan shark. Apart from his greed, Tamami also shows he's a pervert and openly lusts for Koichi's sister. Finally, he's also a coward as when Josuke and Koichi went after Toshikazu Hazamada, he expressed admiration for Koichi but also left, not willing to act and help neutralize an evil Stand User.

Tamami shows some tenacity and pride as a trickster. Whenever he faces setbacks, Tamami confidently goes further in his hustles to force his enemies to yield. He notably claims that he must live up to his namesake of "Tamami", the "Tama" of his name meaning "balls". However, he was forced to flee in front of Josuke Higashikata, because Crazy Diamond was a perfect counter for his hustling tactics, and also ultimately yielded to Koichi when Koichi showed that his family's trust was stronger than any guilt. At first confident, Tamami became Koichi's lackey and began looking up to the boy.

Tamami Kobayashi is a seasoned trickster who's able to plan ahead and hustle people on the fly if need be. In one instance, he deliberately gave Koichi a fake wallet containing damning evidence to frame him as a thief in the eyes of Koichi's mother, but also reacted quickly to Okuyasu Nijimura punching him, deliberately falling on the pavement to make it look like Okuyasu was responsible for his broken tooth. His skill as a con artist is coupled with some talent for acting, which means he can easily look like a trustworthy person or wail strongly enough to make Okuyasu feel guilt immediately.

Tamami's Stand is The Lock. When activated, it grows a physically heavy lock from the chest of its targets when Tamami is able to have them experience the feeling of guilt.

Tamami Kobayashi was born around 1979. Two years prior to the events of Diamond is Unbreakable, he graduated from Budogaoka High School in Morioh.

Tamami received his Stand 4 months before the events of Diamond is Unbreakable from Keicho Nijimura. He proceeded to use his ability in conjunction with his own skill as a conman in hopes of gaining wealth and never having to work again.

One day, Koichi Hirose tries out his new bicycle on his way to school. Unfortunately, he rolls over a bag put in the middle of the street and crashes. Hearing a pained meow and seeing blood spilling from the bag, Koichi believes that he's run over a cat. Tamami, who is sitting nearby, calls out to Koichi. Tamami feigns sympathy and says that Koichi hasn't done anything wrong as the boy only killed a kitten, but soon reveals his true intentions when he tells Koichi that this is his cat and that he must compensate for the loss. Tamami pressures Koichi through his guilt and tells him to hand over his wallet as a form of atonement. The Lock then appears on Koichi, making the boy realize that Tamami is a Stand User. Happily surprised that Koichi can see The Lock because it will make things easier, Tamami proceeds to explain The Lock's power and tells Koichi that the only way to get rid of the overwhelming weight is to pay him. When Koichi tries to hide that he has money, The Lock's size increases, proving Tamami's claims. Tamami takes Koichi's wallet and acquires 7000 yen.

Josuke and Okuyasu intervene to defend their friend. Unfazed, Tamami keeps on demanding money and tells the trio that the proper compensation for the cat will be 500,000 yen. Okuyasu punches Tamami in anger, but Tamami then deliberately falls on the pavement to break his teeth. Howling and accusing Okuyasu of having broken his teeth, Tamami then successfully makes The Lock appear on Okuyasu too. Gloating about the money he'll get for compensation, Tamami prevents Okuyasu from attacking further as he explains that anyone with The Lock on them will have their attacks reflected back at them. However, Josuke turns the situation around. He opens Tamami's bag, revealing that the kitten was a stuffed toy with fake blood on it. Moreover, Josuke heals Tamami's tooth with Crazy Diamond. Shocked, Tamami tries to flee. When Josuke reminds him of Koichi's 7,000 yen, he puts his wallet and the notes on the ground before running away but it is revealed that he tricked the trio into taking with bank notes' corners. Tamami wins the round but develops a particular grudge against Josuke. 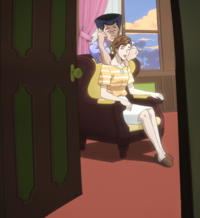 Later, Tamami goes to the Hirose Family's house to enact his plan. As he waits for Koichi, Tamami acts friendly to get Mrs. Hirose's trust and also puts The Lock on Ayana, Koichi's sister, when she accidentally spills tea on his clothes. When Koichi comes back and is shocked to see Tamami, the conman claims that he and Koichi have bumped into each other this morning and that they've exchanged wallets. Pretending that there was 500,000 yen in his wallet, Tamami demands his money back and as proof, speaks about a receipt in detail, which he's planted on Koichi's wallet. Using Koichi's denial, Tamami makes it look like Koichi is a thief in his mother's eyes, causing great guilt and triggering The Lock.

Koichi tries to punch Tamami in anger but trips. While Mrs. Hirose is suffering from the guilt, Tamami privately gloats and reveals that he's planning to take the house's deed and legal seal to Koichi. When Koichi sees Ayana with The Lock and Tamami lusting after her, his anger increases. Koichi's Stand egg hatches, revealing the Stand Echoes. Koichi shoves his family out of the living room to deal with the now frightened Tamami, but Echoes is revealed to be pitifully weak and Tamami hardly feels its punches. Tamami threatens to ruin the family but soon discovers that Echoes' power is to plant sound on anything, including people. The many deafening sounds planted on Tamami begin drive him mad and Koichi orders him to release The Lock. 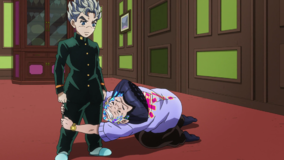 Begging Koichi to spare his life

However, Tamami doesn't relinquish his con. He takes out a knife from a drawer and makes a shallow cut that is made to heavily bleed, tosses the knife in Koichi's hands and loudly wails again. The noise attracts Mrs. Hirose and Ayana back in the living room who believe that Koichi has stabbed Tamami. Their guilt increases manifold, so much that Ayana loses consciousness and that Mrs. Hirose contemplates suicide and tries to stab herself with a knife. Tamami now has the advantage again and orders Koichi to stop the sounds or let his mother commit suicide. However, Koichi creates another sound: "Believe in me". The sound sticks to Mrs Hirose who realises that Koichi would never commit such acts. Her guilt is thus erased and The Lock disappears from her. Out of options, Tamami is defeated and begs Koichi for mercy, to which Koichi playfully tells Tamami to give him 500,000 yen.

From that point on, Tamami becomes Koichi's lackey and looks up to him. Moreover, he turns a new leaf, somewhat, and gets a legitimate job as a loan shark.

Later in the story, Tamami appears to give Josuke and Koichi information on another Stand user: Toshikazu Hazamada. He explains that Hazamada is probably a Stand User due to a horrible incident in which one of Hazamada's classmates gouged his own eye out with a mechanical pencil soon after an argument with him. He tells Josuke to go investigate this dangerous student but is surprised to see Koichi tag along. When Koichi explains that he must protect Morioh, Tamami is in awe at his boss' valor but chooses to leave, telling Koichi that they'll stay friends if he survives.

He later encounters Toshikazu and Surface, then disguised as Josuke. Tamami inadvertently lets Hazamada realize that he's been working with Josuke when he asks how the case is going and Hazamada commands Surface to knock Tamami out with a brick as retaliation, then hides his body.

Taken to the hospital by unknown means; the hit was so hard that Tamami, after leaving the hospital, can't even remember what happened to him.

Tamami oversees a game of cee-lo

Tamami comes back when Josuke and Rohan play and gamble at a dice game of Cee-lo. As Josuke cheats with the cooperation of Mikitaka Hazekura, who has turned himself into Rohan's die, Rohan eventually gets suspicious and calls Tamami to help him discover how Josuke is cheating. For a 20% fee of all transactions, Tamami agrees to place The Lock on Josuke, forcing him to cheat again. Josuke is forced to play but Mikitaka gets sick and begins to throw up as a dice. Moreover, incoming sirens make him sick. Thankfully for Josuke, Tamami interrupts Rohan's examination of the table by pointing out that his house is burning, due to a magnifying glass Rohan has used earlier. The distraction allows Josuke and Mikitaka to flee without being discovered.

Tamami briefly appears to ask for Rohan's autograph along with Akira Otoishi, saying he's a fan of Rohan's work. Both are scolded by Rohan's editor Minoru Kagamari, who tells them that Rohan is busy at the moment. However, Rohan scolds Kagamari back, saying to not treat him like slow mangakas who can't quickly sign an autograph and proceeds to use a dripping technique to sign the autographs with his own coffee. 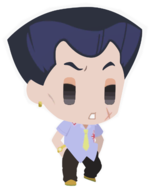 Erases some of the partner's panels and increases the combo