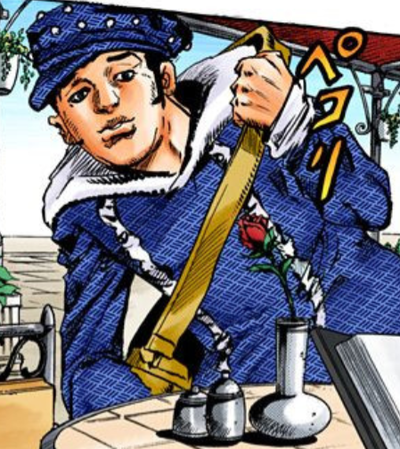 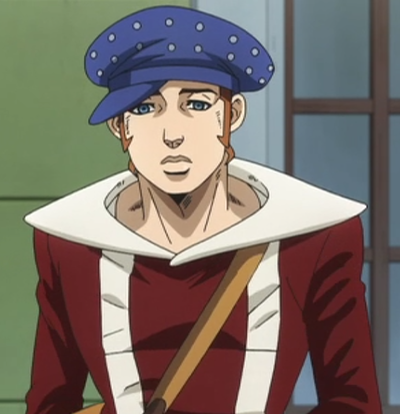 Kaigamori has small eyes and sideburns that are long and stylized, pointed toward his mouth. He wears a cap embedded with beads as well as a jacket with a crosshatch pattern and a large collar.

The series is known for alternating colors between media, the information presented below may or may not be canon.
Skin(Fair)
Hair(Black)
Eyes(Black)
Outfit
(Blue clothes, white collar, trims and decorations)
Skin(Fair)
Hair(Brown)
Eyes(Gray)
Outfit
(Bordeaux and white top, blue beret with gray studs, khaki pants)

Kaigamori is Rohan Kishibe's manga editor. It's his first year in the business, and so he doesn't know how to act in a meeting. He seems to be quite respected for his work, as Rohan shows surprise that an editor such as himself didn't know about the De Staël's Art book and believed it was a music band.

Minoru Kaigamori is a twenty-three year old manga editor. In 2006, it is his first year in the company. He is married with no kids.

Rohan meets Kaigamori to talk about an advance payment from his manga pages, but is scolded by the manga artist for being too early. Rohan explains that he has gone bankrupt and is currently living at Koichi's place, and that his only possession is the De Staël's Art Book. Tamami Kobayashi and Akira Otoishi interrupt the meeting to ask for autographs, but are scolded by Kaigamori because they are busy at the moment. Rohan asks him not to treat him like a slow manga artist, and reveals that he has already signed the autographs.

Rohan explains that for his research about the Yokai legend, he bought 6 mountains in order to stop a corporation who wanted to build a resort in that area. When the resort plan was abandoned, Rohan's land lost its value and he is unable to recover his money. Kaigamori starts to worry about Rohan's mental state, and glances the other way to avoid saying anything. However, Rohan tells his editor the research was a success and begins telling him about it.