From JoJo's Bizarre Encyclopedia - JoJo Wiki
Jump to navigation Jump to search
This page is a translated version of the page Stone Free and the translation is 0% complete. 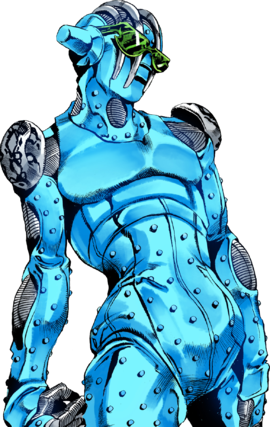 Destructive Power
A
Speed
B
Range
C*
Persistence
A
Precision
C
Developmental Potential
A
A
B
C
D
E
※(Range: 1-2m)
A: Very Good
B: Good
C: Average
D: Poor
E: Very Poor
“
Didn't you say that everything should have a name? I want to give her a name too... Stone Free... because I want to be free from this 'stone ocean'!
”
—Jolyne, SO Chapter 9: Stone Free, Part 2 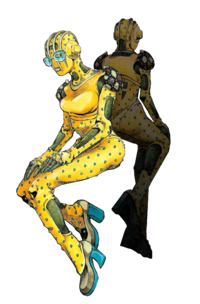 Stone Free from the JOJOVELLER Artbook

It wears elliptical shoulder pads with a python snakeskin pattern,[2] and hexagonal knee pads. Several patches of its lightly-shaded body reveal a fibrous interior, wound horizontally. Its forehead, neck, arms, and the area from its midriff to the top of its feet bear small, evenly spaced studs/bumps.

Composed of string, when unraveled its texture is like silk, apparently smelling of soap.[3]

When Stone Free's string is completely wound or compacted, it is very strong; the destructive force of its punch roughly equivalent to that exerted by a small, extremely fast meteor.[3] It is also fast enough to deflect several bullets aimed at it.[4] It is important to note that due to Stone Free's integrated ability of her own body becoming her stand power, Jolyne has been shown to be able to physically touch and harm stands, despite herself being human.[5]

Stone Free enables Jolyne to unravel her body into string, typically beginning with her hands,[6] and freely manipulate it.[7]

Stone Free's string is invisible to non-Stand Users[7] but it is portrayed inconsistently. It is also sharp as it can slice through flesh when pulled violently enough.[6] On the other hand, the string is not particularly strong and may snap if strained too much,[7] although Jolyne can create a stronger rope out of several strings. With enough precision, the string can pickpocket small objects that way.[8] The string can contract and expand like muscles, allowing Stone Free to control the grip a string has.

If Jolyne gathers the string and meshes it, she can concentrate her power and form Stone Free's humanoid appearance, who may fight in her stead,[9] but Stone Free's range is shortened to around 2 meters.[10] Stone Free, composed of strings, can naturally be unraveled too.[11]

Jolyne may unravel around 70% of her body harmlessly, as well as quickly rewind. It notably allows her to be supernaturally flexible and be able to hide in cramped spaces like someone's mouth.[12] At harm to herself, Jolyne may also cut her string for a further variety of applications. Stone Free's maximum range, unraveled to 70%, is about 24 meters, as long as the string's length.[3][13]