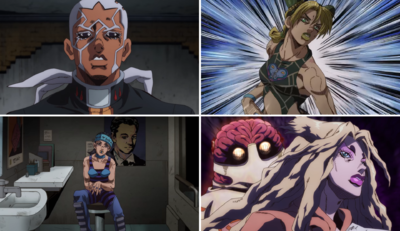 Jail House Lock! (ジェイル・ハウス・ロック! , Jeiru Hausu Rokku!) is the twenty-third episode of Stone Ocean and the one-hundred-seventy-fifth episode of the JoJo's Bizarre Adventure anime. The episode covers Chapter 96 to Chapter 98 of the original manga.

Enrico Pucci has left Green Dolphin Street Prison. Jolyne is determined to break out and stop him, but she has to face the last guardian of the establishment : Miu Miu and her Stand Jail House Lock.

The memories Jotaro had reading DIO's Diary are now revealed. DIO lists several ingredients in order to reach "Heaven" including his Stand The World, a "trustworthy friend" with no earthly desires, and finally the lives of 36 sinners. DIO also gives a specific passcode that he engraved onto his Stand so as to not forget them in any circumstance. DIO planned on destroying The World momentarily and absorbing the souls of 36 sinners to give birth to something new which would recognize the trustworthy friend. Finally, they would need to reach a specific location: North latitude 28° 24', West longitude 80° 36'. There, they would wait for the new moon and then Heaven would come.

The priest Enrico Pucci leaves Green Dolphin Street Prison after the incident that saw nearly the whole population of the Ultra Security House Unit disappear in mysterious circumstances as well as the death of some prisoners and two rescue team members. The security level has been upped since then and Pucci must sign a log and leave the island on a designated truck. It is revealed that his appearance has changed considerably, with lines running on his skin and a new haircut, as well as the Joestar Birthmark on his neck. Pucci has no further use for the prison and with the Green Baby in "his possession", Pucci can proceed to the next step of his plan.

Emporio Alnino is shown sneaking through the nooks and crannies of Green Dolphin Street, noting how dangerous it has become to navigate the prison with the security having been upped to the point all staff members were given guns. Emporio calls out to Jolyne, who is locked inside of a cell. Jolyne has been bored out of her mind and gave herself a navel ring. She announces that she plans on getting out of prison. Emporio wants to stall, promising he'll contact the Speedwagon Foundation later, but Jolyne insists, saying that it was what Foo Fighters would do. Despite this, he notes that there is no one else to help her other than him - Ermes and Anasui are still recovering, and Weather Report refuses to leave his cell. Jolyne has learned from Jotaro's memory DISC what Pucci was after and is determined to stop him.

Still, Emporio is very worried. He explains that there is a reason that this prison holds many Stand Users but that nobody has been able to escape. Nobody has ever been able to get past the visiting rooms except Jotaro, and the prison holds one guard who must possess a power preventing all Stand Users from escaping. Emporio prefers to wait for now because it's the safest way but Jolyne insists on breaking out, even asking when is the new moon and where Pucci wants to go. However, Emporio hears footsteps and quickly hides.

A woman appears in the hallway, her Stand summoned and walking right in front of her. She then relays a message from "Whitesnake", who warns them against escaping and even promises not to impede her efforts to give the DISC back to Jotaro. Jolyne remains defiant with the woman, and asks her name, to which the woman presents herself as "Miu Miu" and her Stand "Jail House Lock". Jolyne quickly tries a surprise attack with Stone Free and punches the woman. However, she narrowly misses Miu Miu, and Jail House Lock has shifted into the bars themselves. Ignoring Miu Miu's last warning, Jolyne continues her attack... but suddenly finds herself punching the wall of her usual cell.

Jolyne falls out of her bed and is surprised that she's back in the women's ward with Gwess. Jolyne winces from the pain in her hand but when she takes a look at it, she sees instructions written on the back of her hand. The writings tell her to take the pen on her bed quickly, then assume that she can only learn three new things at a time and that she must defeat the Stand User Miu Miu. In fact, her body is covered in writings, which are revealed as numbered instructions. The next one is actually to go meet Emporio. Jolyne tries to remember what happened before and reminisces perfectly about the solitary confinement, talking with Emporio about escaping and following Pucci, and meeting Miu Miu. Jolyne sees that it's her own handwriting and realizes that she wrote this on herself, but doesn't remember doing this.

She asks Gwess why she's back in the women's ward but Gwess tries to ignore her. Jolyne asks her again, also asking why she's ignoring her, only to then ask for a pen. Gwess points out that she already has a pen, and Jolyne thus asks if Gwess thinks she wrote on herself, making Gwess even more uncomfortable. Jolyne reads the second message that reminds her that she can only learn three new things and she finally asks if she's been asking the same questions over and over again. Finally, Gwess takes out a paper from her pocket. The paper contains a message from Gwess informing her that the doctors have concluded that Jolyne entered a state of shock and lost her ability to learn more than three things. The message adds that she's been deemed fit to live in the women's ward and so the guards put her back two days ago. Gwess herself wishes her to get well. Jolyne realizes that she's under the effect of a Stand attack. Humorously, Jolyne's then distracted by a message reminding her to wear her panties, causing her to realize she's been going commando all along. Jolyne quickly puts her underwear on. When she stands up, Jolyne asks Gwess for a pen again and takes Gwess's pen.

She glances at the third instruction telling her to defeat Miu Miu and thus she asks Gwess if she knows anyone named Miu Miu. It turns out Gwess knows a Miu Miu in the women's ward, describing her as a pale woman with ratty blonde hair. Gwess also tells Jolyne that Miu Miu just walked by. When Jolyne gets out of the cell, she does see Miu Miu. Jolyne asks for confirmation on her appearance, to which Gwess lists Miu Miu's main features. However, the amount of information is such that Jolyne forgets everything and wonders again why she's in the women's ward.

Ermes, alone in the infirmary, remembers Emporio coming to her and informing her of Whitesnake's true identity and F.F.'s death. Ermes pours a glass of water as a toast and spills it over the prison bars that oversee the outside of the prison, telling F.F. to "drink up" and swearing to avenge her death.

Later, Jolyne finds herself in the cafeteria taking a lunch box. The caterer here asks her for her meal ticket but Jolyne doesn't have one and thus she snatches the box from Jolyne's hand and tells her to go away. Jolyne thinks she probably left the ticket in her cell and writes it down. However, she forgets why she went to her cell in the first place. Jolyne sees Gwess's lunch box on the desk and eats it, to the latter's dismay when she comes back as she wanted the cheese-flavoured penne. Gwess reminds Jolyne that she had her meal ticket all along, prompting Jolyne to go and get another lunch box for her Gwess but Gwess prefers to take the ticket and get one herself.

Gwess tells Jolyne to write a memo on herself. When she writes it, Jolyne glances over several instructions and remembers she needs to see Emporio about escaping the prison. However, Jolyne is unsure if she can sneak through the security in her condition. Humorously, Jolyne ends up in the cafeteria again and takes Gwess' lunch box, only to eat the penne a second time.

Suddenly, Miu Miu appears and sits at Jolyne's table. Jolyne somewhat recognizes her, but Miu Miu slams her shoe into Jolyne's tray. Jolyne gets angry, but Miu Miu overwhelms her with information by putting sauces on the tray, distracting Jolyne. Miu Miu then splashes Jolyne with coffee on purpose so that she can fake cleaning her up and she uses the chance to wipe some memos off Jolyne's arm. Miu Miu also steals Gwess's message about forgetting three things. Satisfied, she leaves, expecting the amnesia to wear down on Jolyne's spirit in the end.

Jolyne is only left with the memo that she can now only learn three things at a time and tries to remember the critical piece of information. She does remember finally and stitches on herself that she needs to meet Emporio. Jolyne decides to leave the final memo blank in order to focus on her objective. Meanwhile, in the ghost room, it is shown that Emporio was also affected by Jail House Lock and is stuck trying to pull a plug electrifying a puddle of water blocking the exit, but then remembering he has to tell something about Jolyne and getting shocked. For her part, Miu Miu has remembered a memo on Jolyne's arm telling her to meet a certain Emporio, but she doesn't know of any of Jolyne's allies going by this name. She prefers to forget about it, for now, sure that nobody will escape her.