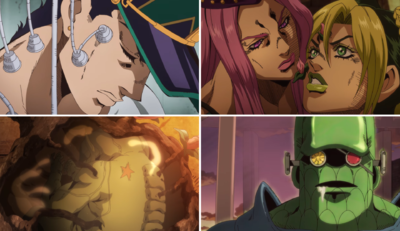 Birth of the "Green" (「緑色」の誕生, "Midoriiro" no Tanjō) is the nineteenth episode of Stone Ocean and the one-hundred-seventy-first episode of the JoJo's Bizarre Adventure anime. The episode covers part of Chapter 75 and Chapter 76 to Chapter 79 of the original manga.

Jotaro has regained his Stand but he still needs his memory to fully revive. Meanwhile, Jolyne and her companions follow the trail of DIO's Bone.

At the Speedwagon Foundation facility where Jotaro Kujo is taken care of, several doctors keep track of his status. Since his Star Platinum DISC has been inserted back into him, Jotaro has woken up at times but spends most of his time sleeping, sitting with his legs crossed like a monk. Jotaro seems to have learned some facts but he has no recollection of his identity or his family. The doctors deem that the fact that he has absolutely no memories means he also has no will to live either and that his body is still breaking down due to the placebo effect of having no incentive to survive. Yet, Jotaro violently reacts if someone dares approach his hat, even if he's unconscious. A doctor carelessly reaches for it and Jotaro slams his arm towards the doctor, breaking an IV drop container. He cuts his arm on the glass and the wounds strangely write the name "Jolyne". At Green Dolphin Street Prison, Jolyne receives treatment from F.F. As she thinks about her father's past deeds - saving her from Whitesnake and telling her how important she is to him - she finds a "Jolyne" scar on her forearm. The wounds strangely heal rapidly. Jolyne realizes that Jotaro was actually protecting Jolyne and his wife and shielding them from Stand-related affairs. Jolyne thus feels like she now completely understands her father.

As Jolyne, Anasui and F.F. walk up the stairs, Anasui discreetly asks F.F. to make Jolyne trip so that she falls into his arms and they share a "romantic" moment. F.F. protests but Anasui reminds her that she promised to help him marry Jolyne in return. F.F. refuses and points out that there is another potential enemy but Anasui insists and pressures her. She reluctantly makes Jolyne trip; however, Jolyne doesn't really fall. She's spotted and bound the man who was playing with DIO's Bone and is now watching them from upstairs. The man is actually holding the bone in his hands but the hand itself peels its skin off for an unknown reason and the man crawls out of sight. The trio quickly goes up the stairs and sees the man snaking on the floor, having a weird root-like growth on his back and having grown in stature. As the man is facing away from them, F.F. holds him at gunpoint and orders him to turn around. The group is horrified when the man faces them and it seems that his face has mutated into a sort of human tree. The prisoner's body twists and mutates further and his head explodes into a strange tree and flowers. The heroes then realize that all the dead prisoners had turned into plants.

DIO's Bone has rolled towards the other assassin, who feels that the Bone has a will of its own and is trying to "give birth" to something. Meanwhile, Jolyne herself begins to also turn into a plant. Anasui notices it and warns Jolyne but when she turns back, the vegetal growths have disappeared. Anasui checks on her face but he sniffs inside of her mouth, disgusting her. He ignores their reaction and prefers to focus on the Bone. He then guesses that the metamorphosis is due to the Bone itself and not a Stand attack. Since Jolyne has also touched the bone with her string when she tried to grab onto the prisoner, she was also affected and is now susceptible to turning into a plant. The assassin sees the Bone begin carried by a root into the open. Jolyne spots the bone and tries to grab on to it, but when she leans over, roots and flowers suddenly grow from her arm. This allows the bone to roll away. Thankfully, Diver Down purges Jolyne of these roots and flowers. However, the roots are practically fused to Jolyne so he can't easily get rid of them. Disturbingly, Anasui nibbles on a flower growing on Jolyne's face. He sees that these are definitely plants and pulls Jolyne into the shades, which makes the plants recede. By now, the whole ward has been turned into small trees. Jolyne nonetheless advances into the light to look for the bone. She is astonished to have found a strange Green Baby bearing the Joestar Birthmark inside of a cocoon.

She reaches for the baby as her body turns more an more into a plant and her feet start fusing with the other roots. Nonetheless, Jolyne focuses on the Green Baby, wondering what is its exact nature and what Whitesnake wants to do with it. F.F. insists on pulling Jolyne out of the sunlight and Jolyne hastily takes the cocoon. Meanwhile, Anasui has spotted someone hiding in the shadows. The heroes investigate this unknown person and it turns out to be a frightened meek prisoner begging for help. The man, named Guccio, asks the heroes for help and Anasui reassures him, telling him to stand and come closer. Anasui strokes the man on the chest, explaining that everyone has the same number of ribs ; Guccio strangely calms down and Anasui lets him go . F.F. wonder what is up with him bug Anasui lets it slide. The heroes begin scaling the west side of the house unit to avoid the sunlight. In another corner of the punishment ward, the last assassin bides his time. He sees Guccio wandering mindlessly in the ward and wonders where the heroes went. He approaches Guccio and grabs his shoulder, but suddenly, Guccio's ribs spring out of his back and pierce the man's arms. The man, a Stand User named D an G, begins to cry and yell. It is also revealed that Guccio was also Survivor's user.

Meanwhile, the heroes have gone out of the punishment ward and discuss what to do next. However, they are completely taken by surprise by the Stand Yo-Yo Ma, a little obese Stand that gulps down the cocoon with the Green Baby. The heroes immediately attack the Stand. Stone Free punches it, F.F. shoots it in the face and Diver Down plunges its arm inside of it. However, Yo-Yo Ma is invulnerable and they are unable to retake the cocoon. Strangely, Yo-Yo Ma begins to act like a servant to Jolyne and even tells the group about D an G, his User. F.F. shoots it again, to no avail. Despite the danger, the group decides to split to be able to stay on the move and F.F. stays in prison in the hope of finding D an G and killing him.

Jolyne and Anasui find a boat. Anasui fails to start the engine and Yo-Yo Ma tells him to set the throttle lever to the neutral position. The engine starts and the Stand explains how to pilot the boat. The primary group leaves with Yo-Yo Ma as the pilot. Suddenly, F.F.'s jaw melts, making her realize that Yo-Yo Ma was very dangerous despite his appearance and placid attitude. She hopes that Jolyne and Anasui will keep an eye on it. 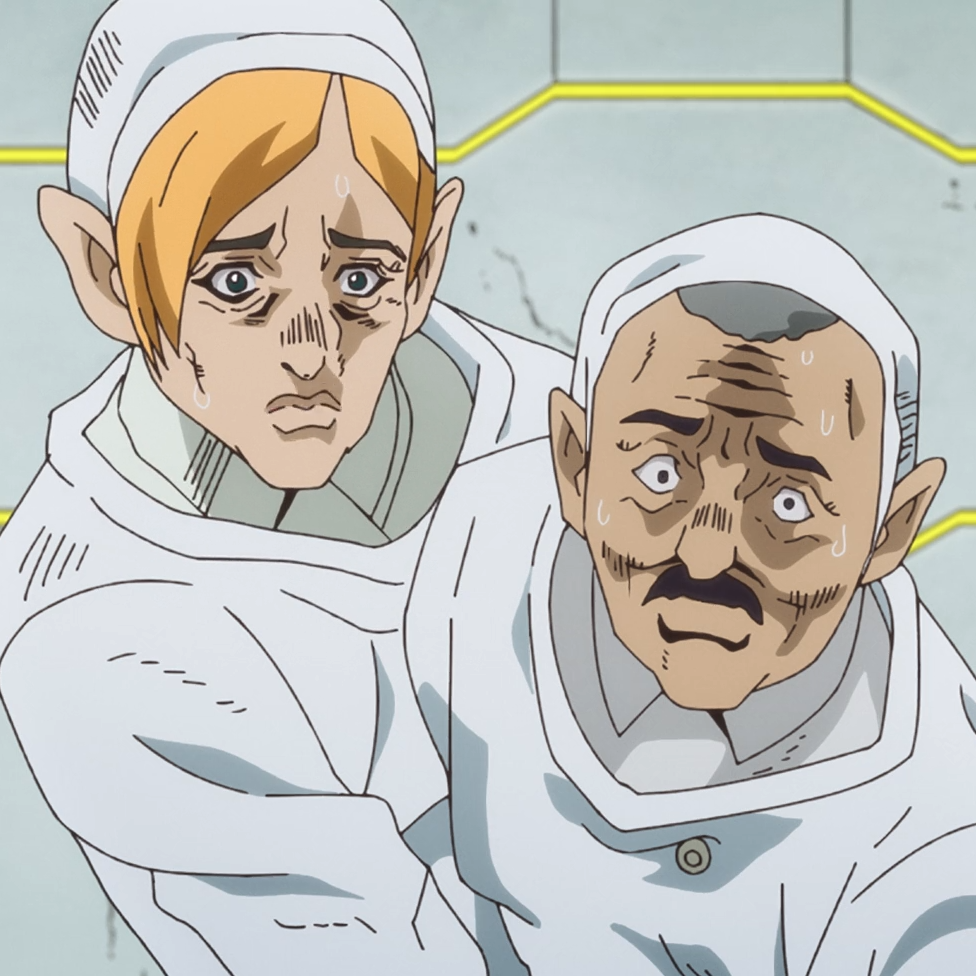