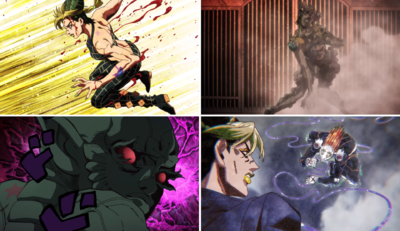 AWAKEN (AWAKEN -目醒め-, Aweikun-Mezame) is the twenty-first episode of Stone Ocean and the one-hundred-seventy-third episode of the JoJo's Bizarre Adventure anime. The episode covers Chapter 85 to Chapter 90 of the original manga.

The fight between F.F. and Enrico Pucci continues. Meanwhile, Jolyne and Anasui encounter the Green Baby and try to catch it. However, it becomes clear that a Stand ability protects the baby.

The narration presents F.F.'s greatest fear of losing her intellect. Ever since she's been in prison, F.F. has accumulated many memories of her life in prison and of her friends, and now she fears losing the memories she has of them, notably of Jolyne whom she deeply admires.

In the now, F.F. briefly hesitates between shooting D an G or Enrico Pucci and then decides on D an G. That split second gives Pucci an opening to send in Whitesnake, who blocks the shots and then chops into her head. D an G only suffers from a glancing hit. Whitesnake starts to extract F.F.'s Foo Fighters DISC, but she reacts quickly and shoots herself in the head. The DISC comes out and some plankton covers D an G, they go inside of his body and then tear him apart from the inside, decapitating him. In the swamps, Yo-Yo Ma melts away, leaving an empty cocoon behind it. Strangely, dead fishes come to the surface. Jolyne and Anasui glimpse the baby hidden under a part of the cocoon. Jolyne feels speechless at the existence of this strange Green Baby. She feels the plant mutation subsiding and wonders if it is because the baby is born. The boat hits a root and rocks, making the Green Baby fall into the water.

Meanwhile at the prison, Foo Fighters sneaks into the ambulance's driver's cabin. However, she cannot survive long on dry land without. It spots a faucet just outside of the building and tries to open the door but Whitesnake surges from beneath the driving wheel and grabs onto Foo Fighters. Foo Fighters tries to punch Whitesnake and it deflects the blow and cuts Foo Fighters' arm. It plunges its hand in Foo Fighters, tearing the DISC from its head, but thankfully, the arm still manages to shoot plankton bullets into Whitesnake, forcing Whitesnake to evade and let Foo Fighters go. Foo Fighters is eventually thrown out of the ambulance. She is now cut in half and on the ground. Enrico Pucci thus asks her what was in the punishment ward, asking for details. Foo Fighters does say that something was born from the plants but thinks that Anasui may have killed it. However, Whitesnake is confident that the creature can't be killed and it will be able to control it thanks to Jotaro Kujo's memories. However, Pucci suddenly realizes that Foo Fighters has been stalling for time by answering them. It turns out that the main body is the legs in contain the Stand DISC. Foo Fighters manages to reach and open the faucet, allowing it to reconstitute itself. However, Whitesnake has inserted a Stand DISC giving the ability to boil water into the remains of the dummy Foo Fighters. The main Foo Fighters thus forcibly gains this ability and it suddenly disintegrates because of the water inside of it boiling.

In the marshlands, it turns out the baby has already reached the ground and is crawling away. Anasui assumes it's trying to escape but Jolyne, who has stitched her tongue to be able to talk, is not sure of its intention. She begins to run after the baby but Anasui tells her to stop. Jolyne realizes that she's shrunk, while a small rock the baby rolled behind him turned into a larger boulder. Jolyne tries to run anyway but when Anasui grabs onto her shoulder to pull her behind, they switch places and Anasui also finds himself shrinking while Jolyne has grown. Anasui tries to analyze the situation. He notes that the Green Baby seems to have a normal size no matter how close he is, but still sees objects shrinking as they get closer to the baby. As soon as he gets away from the baby, Anasui regains his normal size. Thus, Anasui concludes that the baby's ability makes things shrink proportionally to their relative distance to it. In conclusion, the baby would be theoretically unreachable because of the shrinking hindering more and more their ability to approach.

Jolyne is nonetheless determined to reach the Baby. She rushes towards the baby, not minding shrinking more and more. Anasui is astonished but remembers that her focus who seduced him in the first place. He kicks a bottle near the baby, who touches it out of curiosity, and notes that the bottle hasn't shrunk. Jolyne and Anasui thus run towards the Green Baby, shrinking more and more. Jolyne tries to send a string towards the baby but her unravelling is more extreme than anticipated since the string also gets smaller and smaller, causing Jolyne to unravel herself to a dangerous degree. She decides to climb a small plant and jump down near the Green Baby since, she thinks, she must eventually reach the ground. Jolyne prepares herself but suddenly, something pulls on her string. She then sees a Stand crawling on her string, which grows more and more as it approaches. The enemy Stand bites on the string, hurting Jolyne. For her part, she finds herself somewhat stuck midair and fears she will never reach the ground anyway as the Stand Green, Green Grass of Home grows in size and power.

Green, Green Grass of Home has grown to the point it towers over Jolyne and it reaches for her. Stone Free deploys a string net to tie it up. However, Green, Green Grass of Home snaps the net due to sheer size. Stone Free tries to punch it but the Stand evades the strike and grabs onto her leg. It then tries to drag Jolyne towards the Green Baby and she fears being erased if she gets infinitely shrunk. Thankfully, Anasui intervenes. Diver Down grabs Green, Green Grass of Home and pulls Jolyne out. Incidentally, one of Jolyne's shoes falls near the Green Baby. Jolyne and Anasui land too, but find themselves in the middle of a strange mountainous landscape. They thus can observe the Baby and the Stand from the top of a cliff. Anasui suggests retreating but Jolyne is still adamant about reaching the Baby. Suddenly, Green, Green Grass of Home reaches for a pebble and tosses it toward Jolyne. It turns into a large rock that nearly crushes Jolyne and Anasui, forcing them off the cliff and the enemy Stand comes for them.

Suddenly, the Green Baby touches Jolyne. When she turns back, she realizes that she's returned to her normal size and has the baby crawling on her. Anasui has also returned to normal. Jolyne asks what is going on and Anasui theorizes that the child has taken an interest in Jolyne and stopped its attack, probably because it saw the Joestar Birthmark on her shoulder. The Baby seems to appreciate Jolyne, but Anasui predicts that it will become an enemy.