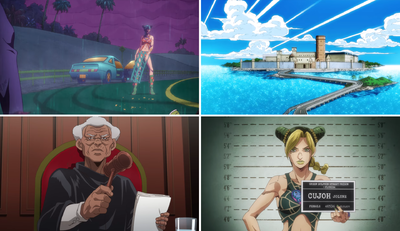 N/A
For other usages of the term "Stone Ocean", see the disambiguation page.

Stone Ocean (, Sutōn Ōshan)[2] is the first episode of Stone Ocean and the one-hundred-fifty-third episode of the JoJo's Bizarre Adventure anime. The episode covers from chapter 1 to chapter 3 of the original manga.

Set in 2011 and in the US state of Florida, young Jolyne Cujoh is framed for a DUI and imprisoned but would gain a mysterious new power after receiving a bizarre item from her estranged father.

Jolyne is informed by her lawyer that she has been arranged to go to Green Dolphin Street Prison to receive her punishment for her crime. The lawyer also brought essentials for Jolyne's use, with a pendant from her father among them. After opening the pendant, Jolyne cuts her finger with a chipped stone stored inside the amulet. Jolyne states that her father had never been there for her, and that it would be useless to contact him. On a photo inside the amulet, an image of her father wearing a cap and white clothing along with her mother is shown. She throws the amulet away and it drops into a drain.

Later, Jolyne talks with the same woman with braided hair, in a vehicle heading to Green Dolphin Street Prison. She introduces herself as Ermes Costello, and informs Jolyne that she will need to have money in the prison. Jolyne manages to guess where Ermes is hiding her own money: a surgically added hole in her left breast.

On November 8 at 11 P.M., Jolyne talks with her lawyer again, wondering where her pendant went after she threw it away. Jolyne thinks back to October 28 at 5:32 P.M. when she was in a car with her boyfriend, Romeo, during a rainy evening. To Romeo's dismay, Jolyne acts overly affectionate towards him. Romeo asks for a sip of her drink but Jolyne refuses since it's a cocktail with 10% alcohol in it.

While they look at each other, a body suddenly crashes into Romeo's windshield. The car veers off to the side of the road, as Jolyne and Romeo are shocked. Jolyne looks back, and sees a corpse hanging from a tree. She begins to call an ambulance, but Romeo stops her. Fearing that their futures are at stake, he convinces her that they must hide the body. They put the corpse in the trunk and drive away.

Her lawyer tells her that Romeo reported the car was stolen, and that Jolyne was suspected of stealing the car and hitting a civilian while drunk. The lawyer asks if Romeo was the actual driver, to which Jolyne replies that she cannot say. The lawyer states that if she freely admits to the crime, some charges will be dropped and she will only receive a one-to-two year sentence. Jolyne refuses, holding on to the idea that she is innocent. However, in court, she accepts the terms of the bargain, and pleads guilty to all charges. It is then revealed her lawyer had deceived her. The body that she hid in a swamp was actually alive so Jolyne is being charged with murder. Thus, the plea bargain is invalid and she is sentenced to fifteen years at Green Dolphin Street Prison. The lawyer talks with Romeo outside the courtroom, revealing their scheme to frame Jolyne for the crime. Jolyne overhears them with her ability.

Jolyne is taken to prison in a straitjacket, where the guards explain that she is in level four maximum security prison. They assign her the prisoner number FE40536. Jolyne is then instructed to strip so they can search her. Once naked, she mocks the guards by posing suggestively. After taking her mugshot, Jolyne spots her lawyer outside her bars, who is there to hand over some papers. He feigns being respectable and noble while speaking with one of the guards. The guard hands him a note from Jolyne, reading "Pass this to him, too. Feeling comfy? But you will keep sweating. Now... and forever." Jolyne swears that she will escape prison and enact her revenge.

In his car, the lawyer turns on the air conditioning, causing strings to come out of the fans and strangle him. His car crashes into the railway, injuring him. Elsewhere in the prison, an unidentified prisoner carries the pendant Jolyne had received from her father.