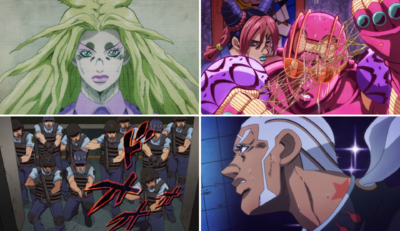 Jailbreak... (脱獄へ…, Datsugoku e...) is the twenty-fourth episode of Stone Ocean and the one-hundred-seventy-sixth episode of the JoJo's Bizarre Adventure anime. The episode covers Chapter 99 to Chapter 102 of the original manga.

Jolyne's struggle against Miu Miu continues. Although her inability to memorize more than three new things is crippling, Jolyne must somehow reach Emporio for help.

Jolyne finds herself in the video room watching a movie alongside several prisoners. However, she keeps forgetting the context and rewinds the scene endlessly, annoying the rest of the group to no end. Jolyne ends up getting thrown out. She then reads a 4-koma comic but naturally doesn't get the joke because she can't remember the context. Jolyne has to focus her thoughts and remind herself of her path to Emporio's room. However, she notices Miu Miu close to her who steals glances at her hand. Seeing that she's got a memo reminding her to not trust anyone who looks at her hands, Jolyne decides to attack Miu Miu without thinking. Miu Miu evades the blow and runs away. Jolyne sees Jail House Lock and, realizing that she's the enemy, runs after her.

However, Jolyne ends up in an unfamiliar hallway, forgetting who she was chasing. A guard spots her and Jolyne realizes that she's the one being pursued. She narrowly avoids a shot from the guard and finds herself cornered between two groups of guards. However, when the guards converge on her position, they miss her completely and she seems to have disappeared. In truth, Jolyne unravelled her body and sneakily stuck herself to a guard's back. She's then able to approach the staircase leading to Emporio's room. Meanwhile, we see that Emporio has managed to identify the enemy as Miuccia Miuller, a head guard in charge of the visiting room and the front gate.

Jolyne sneaks into the ghost room, but she completely misses Miu Miu, who then discerns the crack on the wall.

When Jolyne enters the ghost room, she's also shocked by the puddle but nonetheless crosses it. Confused, Jolyne asks what's going on and Emporio answers that he spilt some water on the entrance. Emporio then notices Jolyne and asks her when she got here. Jolyne is distracted by the memos Emporio wrote on his hands and the conversation quickly degenerates as the two amnesiacs loop through irrelevant information. However, Emporio remembers he needed to print out something important.

Still, Miu Miu slips through the crack in the wall and sees Emporio. She also sees that Emporio identified her and deems it a crime against the security system of the prison. Miu Miu shoots Jolyne, who easily deflects the bullets with Stone Free. However, Miu Miu had also shot Emporio and his computer screen just before. Confident, Miu Miu shoots several bullets to overwhelm Jolyne, but Stone Free deflects the bullets as well, surprising Miu Miu. In fact, Jolyne managed to memorize all the bullets by looking at their reflection on the puddle, which only counts as one. Jolyne decides to also stitch the fact that she needs to avenge Emporio on her arm.

Worried, Miu Miu retreats back to the staircase and narrowly avoids a punch from Stone Free. She loses her handgun but reassures herself since the heroes won't identify her again with the computer broken. In the music room, Emporio looks at his broken computer, only remembering he needs to print out something. He doesn't have a printer, but Emporio does see a written instruction on his arm telling him to print out.

Meanwhile, in the staircase, Jolyne fights Miu Miu and her Jail House Lock. She has a power advantage and forces Miu Miu up the staircase. Jolyne deploys a string and ties her by the head, pulling her in, and Miu Miu is forced to call for reinforcements. Several guards notice the fight and, noticing their head guard being attacked, quickly converge on Jolyne. Distracted, Jolyne doesn't notice Miu Miu slipping away and she's taken by surprise by a violent arm swipe from Jail House Lock. Jolyne begins to be overwhelmed by Miu Miu and the sight of the guards converging, and she cannot defend herself properly. Jail House Lock sends her down the staircase as Miu Miu gloats and expects Jolyne to be shot on the spot by the guards. Already, dozens of guards are appearing behind Miu Miu to support her.

Suddenly, Emporio slips out of the corner and hands her a paper covered in 0s and 1s that Emporio calculated and written on the paper. Since it's a binary system, it only counts as two pieces of information, and Stone Free is able to print out a portrait of Miu Miu. Seeing Miu Miu now, Jolyne has to ask if she's an enemy. Miu Miu doesn't see the portrait and remains dismissive, which only gives Jolyne the confirmation she needs. Stone Free then violently pummels Miu Miu.

Jolyne successfully holds Miu Miu hostage while dozens of guards from the top and bottom of the stairs aim at her. The guards look at the situation and are confused by Emporio's presence in prison, and Jolyne's presence, remembering that she was the only survivor from the Punishment Ward and that Miu Miu is being held hostage. Jolyne suddenly moves, prompting the guards to aim their guns in order to shoot her, but then Jolyne and Emporio are able to slip through the guards unimpeded. For their part, the guards don't even remember who they were supposed to shoot. Jolyne congratulates Miu Miu on her handy ability, having forced her to use Jail House Lock on the guards. The guards are kept confused by the amnesia, allowing Jolyne and Emporio to go through one of the security gates. On their way out, Jolyne and Emporio also find Ermes, who tags along as they escape the prison.

With Miu Miu out of commission, Jolyne, Emporio and Ermes are able to escape prison, with Jotaro Kujo's memory DISC in their possession. They must now go to the Kennedy Space Center in six days, before the new moon, to stop Pucci's plan.

Meanwhile, a woman is seen leaving a supermarket with groceries and accidentally makes a carton of eggs fall to the ground. Thankfully, Pucci catches it before it falls to the ground. The woman recognizes Pucci and, noticing him sweating and breathing heavily, asks if he's alright, but Pucci assures her that he's well. When Whitesnake's hand grazes the woman's wristwatch, the hands begin to accelerate and some nails start to grow rapidly on the woman's hand, startling him. Pucci excuses himself and leaves. The woman discovers that her nails have grown long, but is even more horrified to see the eggs she's bought have hatched some chicks.

Pucci thinks about how it seems Whitesnake is not his Stand ability anymore and that he's losing control of his power. Yet, he hopes that this power will enable him to fulfil his objective. Pucci's destination is set: the Kennedy Space Center situated in Cape Canaveral, with the new moon being in six days. 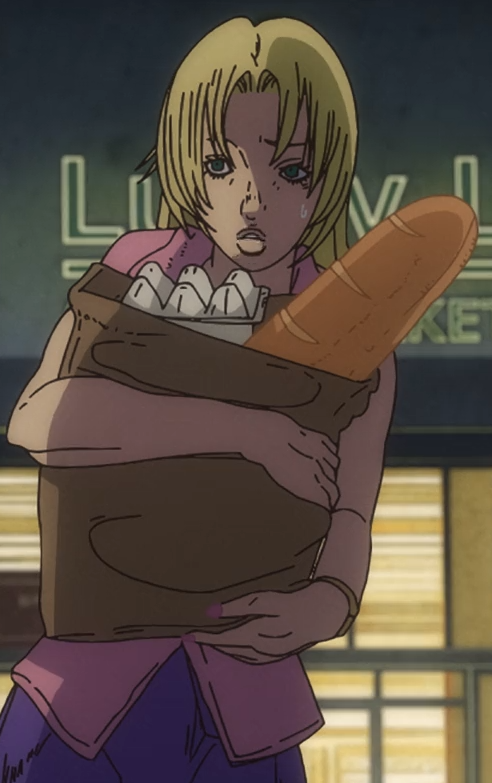