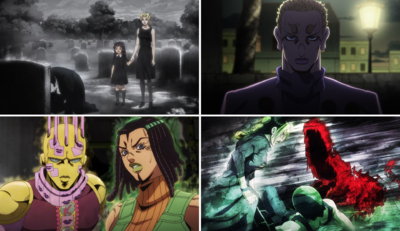 Kiss of Love and Revenge, Part 1 (愛と復讐のキッス その①, Ai to Fukushū no Kissu Sono 1) is the thirteenth episode of Stone Ocean and the one-hundred-sixty-fifth episode of the JoJo's Bizarre Adventure anime. The episode covers the Chapter 51 to Chapter 54 and 10 pages of Chapter 58 of the original manga.

Jolyne has been thrown into Green Dolphin Street Prison's Ultra Security House Unit. It is revealed that it was because of an incident involving Ermes and another inmate named Sports Maxx, who killed Ermes' sister.

Jolyne Cujoh has managed to retrieve her father Jotaro Kujo's Star Platinum DISC and somehow sent it to the Speedwagon Foundation. However, there is still Jotaro's memory DISC to find in order to completely save her father.

We see Jolyne sitting besides a heavily bleeding Ermes and another dead woman. Thus, Jolyne is forcibly brought to the Ultra Security House Unit (or punishment ward) on account of all the chaos and deaths she seems to cause around her. She is hereby put in isolation for an indefinite time, with only one meal and shower per day and will all her permissions revoked. She's thrown to the floor, landing on a squat toilet. Regathering herself, Jolyne discovers the bleak dark cell she's in. She grabs onto a piece of bread on a tray but discovers that it is covered in cockroaches. Startled, she shrieks. This actually causes the other prisoners to be excited because they realize a woman is here. Jolyne even receives faeces on her face, to the sick joy of the other inmates. Reeling, Jolyne nonetheless quickly regains her composure, vowing to see through her time on behalf of her mission. Meanwhile, Enrico Pucci reminisces his time with DIO in the chapel. Having Jotaro's memory DISC in his possession, he vows to reach Heaven.

The story goes back in time to show what has happened. Ermes explains the power of her Stand, Kiss. When she puts one of the stickers produced by Kiss on an object, she can duplicate it. Then when she takes the sticker off, then the two objects will fuse back to one, though the object will be fractured. Ermes has decided to see this power as a sign from Heaven and plans on making Sports Maxx pay for killing her sister Gloria. Ermes is discreetly observing Maxx in the chapel as the latter smells a bouquet of flowers. She tries to approach Maxx but then the priest Enrico Pucci appears, forcing Ermes to bide her time. Maxx asks Pucci if he can take one flower, but strangely the flower is being covered in maggots.

It is lunchtime at Green Dolphin Street Prison. As F.F. waits in line to get her portion at the cafeteria, another inmate cuts her off. When Jolyne points it out, F.F. comments that it is as if nobody in prison liked Atroe, the woman whose identity she stole. Jolyne suggests that F.F. aggressively asserts herself but F.F. decides that it might be worth simply changing her behavior to be accepter among her peers, and thus looks for ways to do the opposite of what Atroe did. Humorously, F.F. decides to eat the opposite of what Atroe would have eaten. Jolyne briefly complains about her bullet wounds, saying that she's still hurting and asking F.F. to do something about it. However, F.F. only filled the wounds with plankton and cannot do anything to accelerate Jolyne's healing. F.F. then asks what is the opposite of pork, and the Curly-Haired Prisoner who works here gives her salmon, praising how it goes against the river's currents in contrast to a pork's lazy lifestyle. More prisoners cut in line, which angers Jolyne, but F.F. cheekily decides to let everybody pass. It actually causes the prisoners to bicker and fight, allowing F.F. and Jolyne to go through the line unimpeded.

Jolyne remarks that she hasn't seen Ermes in days and she asks what F.F. knows about it. F.F. reveals that she's seen Ermes following a man in particular in prison. The day Jolyne tried to deliver the Star Platinum DISC, F.F. had informed Ermes of the trouble in the courtyard but Ermes decided to not intervene and keep following that man. Worried, Jolyne decides to ask Gwess if she knows anything about the man Ermes is following. Gwess first asks for payment, sarcastically saying she will give her a discount on account of their "friendship", and Jolyne reluctantly gives her money. Gwess points them to the library in which Jolyne and F.F. discover a news article about a woman found drowned in a river. The woman was Gloria Costello, Ermes's deceased older sister.

The next day, we see Ermes stalking Sports Maxx and observing his every habit: how he regularly goes to the chapel, to the graveyard to tend to the tombs, and to the workshop working on stuffed animals. Thus, Ermes has been able to find out the best place to isolate and kill him. Suddenly, Jolyne and F.F. confront Ermes. Jolyne F.F. asks what is he up to, but Ermes plays dumb. Jolyne asks Ermes if she really want to prison voluntarily just to have a chance to kill Maxx, but Ermes rebukes her and leaves, determined to avenge her sister.

A flashback details Ermes' life. When Ermes was merely a child, she and Gloria lost their mother. From then on, Gloria decided to act as the mother of the family and shoulder the responsibility of raising Ermes. When Gloria was 20, she inherited her father's restaurant and took it upon herself to run the family restaurant. Gloria counted on Ermes' help to run the family business together with her but Ermes wanted to acquire a scholarship in cross-country and go to college, which caused friction among the siblings. One evening after an argument, Ermes stormed out of the house to go run. Gloria followed Ermes out, but then witnessed a man being murdered by a mobster. Gloria managed to hide and had no intention to get involved with the mob. However, she saw the mobster looking at Ermes, who was running nearby. To protect her sister, Gloria was forced to call the police as a witness. Gloria's testimony meant that the state could incriminate the mobster, an infamous criminal named Sports Maxx, for life, but Maxx had someone kill Gloria. Without witnesses, Maxx was only sentenced to 5 years in prison for tax evasion and inflicting bodily harm. Ermes, who took part in the trial, was appalled by the sentence and the police's incompetence. Moreover, Ermes lost her father, who died of grief and sickness, and the restaurant, leaving her alone.

In the present, Sports Maxx is heading for the workshop when he notices something stuck on a pipe on the wall, which turns out to be a photo of Gloria. Curious, Maxx takes it off the pipe. At this moment, Ermes reveals herself and tells him that she wants him to remember her sister. Suddenly a second pipe flings into Maxx and traps him inside of the pipe because he took off a sticker that was hidden behind the photo. Shocked, Maxx tries to grab onto the fracture on the pipe to avoid falling but Ermes seals it by duplicating a part of it with another sticker and tries to flush him into the gutters so that he dies down there. Yet, Ermes hears Maxx mumble inside of the pipe and call to a certain "Limp Bizkit".

Suddenly, a bottle in the workshop breaks seemingly without reason, however, Ermes doesn't see anything but some tools and a stuffed bird on a table. It quickly becomes apparent that something small and invisible is heading towards Ermes. It cuts one of Ermes' fingers and pierces her face multiple times. Ermes summons Kiss to fight the enemy off but she hits nothing. However, she can hear flapping in the corridor. She quickly guesses that it has to do with a Stand power and that she's fighting a bird-like foe, but it does her no good when it suddenly tears at her carotid. Ermes quickly duplicates her vest to trap the enemy within and she's able to crush it on a wall. This causes the stuffed bird to break as well.

Still recovering from that fight, Ermes realizes that Sports Maxx has become a Stand User because of Whitesnake for an unknown purpose. On another hand, it means that she could discover Whitesnake's true identity if she investigates Sports Maxx. She tries to taunt Maxx by kicking the pipe, but she's then interrupted when the table of the workshop is violently flipped by something else. Ermes sees a stuffed alligator and notes something big and invisible running after her. Ermes has to hang on a pipe on the ceiling to escape the creature. Ermes finally realizes that her foes have to do with the stuffed animals in the workshop and that they are probably undead invisible animals. The invisible alligator on the ground repeatedly charges the pipe, and Ermes sees that Maxx is trying to escape. Suddenly, Jolyne and F.F. appear. Ermes tries to warn them but the alligator tears F.F.'s leg. Ermes quickly explains that the invisible corpse of an alligator is after them. Jolyne splashes it with F.F.'s blood, making it somewhat visible as it rushes at her, its maw gaping open.