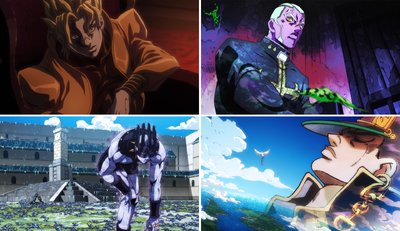 Torrential Downpour Warning (集中豪雨警報発令, Shūchū Gōu Keihō Hatsurei)[2] is the twelfth episode of Stone Ocean and the one-hundred-sixty-fourth episode of the JoJo's Bizarre Adventure anime. The episode covers Chapter 47 to Chapter 50 and parts of page 12 and 13 from Chapter 58 of the original manga.

Jolyne reaches the courtyard. Pucci recalls his talks with DIO and his reason for hunting Jotaro when Weather unleashes a squall of poison dart frogs.

Enrico Pucci suddenly finds himself in front of Jolyne. Confused, Pucci realises that Lang's failed and about to reach the courtyard. Still not yet unmasked, Pucci reaches for the alarm. Jolyne stops him, begging him to not raise the alarm. In her mind, Jolyne feels conflicted at the idea of attacking a priest even though it is to save her father. She makes up a story and asks Pucci to let her go to the courtyard for a minute, telling him that her father's life and spirits are at stakes without giving precisions as she expects Pucci to be ignorant about Stands. Pucci then asks if she's alone and Jolyne confirms it, wanting to hide Weather. Pucci decides to let her pass. In reality, he's guessed that Jolyne was lying about being alone because she's avoided looking at the barrels at all, and thus the priest estimates that he has no choice but to let Jolyne pass to not get exposed as Whitesnake's User.

Jolyne thus runs towards the courtyard and spots someone standing by the stone clock. She expects the man to be an ally, but she is shocked to see that it is in fact one of the guards. This guard has been affected by a DISC and Pucci has placed him there just in case. The guard shoots Jolyne in the abdomen, and a desperate Weather hears the gunshots.

Enrico Pucci reminisces the past, when a young Pucci had met a man in Egypt who had the ability to stop time: DIO. Pucci remembers DIO's extraordinary physique and aura, and remembers that they were good friends who visited each other regularly. During one meeting, DIO suddenly said that there could be a way to go to Heaven. Pucci frowned at this declaration but DIO reassured him, telling him that he didn't want to die but rather to make the spirit evolve until it reached "Heaven". Only thus it would attain true happiness, DIO said, adding that happiness wasn't about being invincible, having money or even ruling over the human race. DIO declared that he would get there, no matter the sacrifices. Curious, Pucci asked how he would do it but DIO didn't reveal it immediately. DIO told Pucci that he would need the priest's help and that his findings where recorded in a notebook, but then the notebook was burned by Jotaro Kujo, who read its content before destroying the notes. Thus Pucci coveted Jotaro's knowledge and plotted for 20 years in order to lure Jotaro in Green Dolphin Street Prison and steal his memories, only stealing Star Platinum to avenge DIO. Although Jolyne has been a thorn in his side, Pucci expects things to go well now that she's been eliminated.

In the laundry room, Weather Report remains behind the drum barrel. He realizes that Jolyne has been shot but doesn't know what is really happening and is stuck behind the metal door. Satisfied, Pucci decides to head back to his chapel. Meanwhile in the courtyard, the brainwashed guard feel confused about the exact circumstances of his presence in the courtyard, but distinctly remembers an order to kill Jolyne Cujoh. As Weather helplessly struggles against the door, the guard prepares to shoot Jolyne. Suddenly, a frog falls on the guard's hand, throwing his aim off. Astonished, the guard and Jolyne then both look up and are surprised to see hundreds of frogs falling from the sky, one such frog landing right on the guard's face. It is revealed that Weather Report has used his Stand's ability to at least protect the DISC, even if his move won't protect Jolyne herself, but he hopes that she will have the strength to survive the ordeal. In the hallway, Pucci also looks up and is shocked to see that it's raining frogs. The narration thus explains that records of unusual rains of animals from sardines to snakes to frogs are a rare but not an unheard of meteorological phenomenon. Moreover, it is raining poison dart frogs, whose bright skin color signals their extreme toxicity.

The brainwashed guard himself is gravely affected by the poison which causes huge blisters on his hands and face. The rain of frog breaks through the skylight in the corridor and the rain of frog also falls on Pucci, who drops his pass card. Pucci identifies the poison dart frogs and the danger that they represent. More frogs fall towards him, forcing Pucci to summon Whitesnake to punch the amphibians away. However, he's still stuck in the hallway because his card has been buried under the frogs. The priest realizes that the culprit must be Weather Report, knowing about the man's abilities. In the courtyard, Jolyne too is in a dangerous situation as the frogs not only threaten to fall on her, but also their poisonous innards represent a danger when they splatter on her. Using a string, Jolyne thus weaves a tight sheet to make the frogs rebound far from her but even then, the frogs' body fluid is seeping through the strings.

Stuck in the hallway, Pucci calls for help and begins to count prime numbers to keep his calm. However, the situation makes it difficult to keep his composure. He calls for the guard he's posted in the courtyard, but when the latter enters the hallway, Pucci sees that the guard's body has horribly swelled and has been burned because of the poison. The guard begs Pucci to ask for God to spare him. Ignoring that, Pucci orders the guard to come over here and give him his pass. Unfortunately for him, more frogs fall on him ; the guard drops his pass and dies from the poison, his fall crushing some frogs and even splattering Pucci's face with poisonous gore. Another guard appears and is confused about the frog rain. Pucci asks him to open the gate to the inside, but the guard is frigtened at the sight of a tropical frog clinging to his boot. Under the pretense of seeking help, the guard tries to turn back and flee. Angered, Pucci orders Whitesnake to give him a DISC. Pucci kicks a poison dart frog and then throws a DISC ordering the animal to explode once it flies for 10 meters. Pucci hits true and the frog explode in front of the guard, the body fluids blinding him. The guard falls to the ground, blinded and asking for help, and thus is forced to come open the door for Pucci so that the priest can seek help. Finally out of harm, Pucci can set his mind to retrieving the Star Platinum DISC and leaves the blinded guard for dead. In the courtyard, Jolyne is covered in frogs and she realises that she cannot hold against this deadly frog rain and cries in despair.

Once the rain ends, Whitesnake enters the courtyard in search of Star Platinum's DISC. Despite the risk of being exposed, Pucci has decided to order his Stand to retrieve the DISC. Whitesnake finds what appears to be Jolyne's corpse covered with frogs and uses a second to comment on her demise. Following Pucci's advice to scan the area between Jolyne and the gate, Whitesnake finally finds the DISC and picks it up. Suddenly, Jolyne reveals herself to be alive and uses a string to snatch the DISC from Whitesnake's hand. Indeed, Jolyne has tied several frog to make a net to produce a cushion that has stopped the frogs from splattering near her. Whitesnake angrily tries to kill Jolyne, but it's too late as the messenger from the Speedwagon Foundation has already retrieved the DISC. The messenger is in fact a messenger pigeon named Savage Garden which flies away. Whitesnake desperately retrieves the guard's gun and tries to shoot the bird but the weapon is out of ammunition. Hearing guards approaching, Whitesnake makes his retreat, but not before spitefully declaring that Jolyne not saved her father yet. Jolyne attaches a string to the Stand in order to discern its user's identity but Pucci spots it and severs the thread, escaping the situation without being unmasked. Pucci consoles himself, claiming he has no need for the Stand DISC and that everything continues to go according to plan.

Finally, the guard will report the presence of Weather Report, Jolyne Cujoh and Lang Rangler, all severely injured. Because of the commotion surrounding the emergency situation, Jolyne's "attempted escape" hasn't been noticed. Meanwhile, Savage Garden flies towards the Speedwagon Foundation's Headquarters so Jotaro can at least retrieve his Stand, but the heroes need to retake his memory DISC to restore his mind.

Later in the chapel, Whitesnake summons Sports Maxx, another inmate, and shows him a bone which belongs to a friend: DIO.