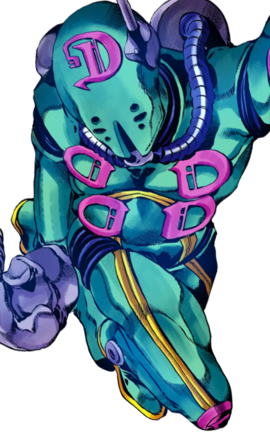 SO Chapter 59 - His Name Is Anasui

Diver Down (ダイバー・ダウン, Daibā Daun) is the Stand of Narciso Anasui, featured in Stone Ocean. It is a humanoid Stand with a scuba-diver theme and its ability is to either store energy where it punched or dive into objects to modify their very structure.

gear to aesthetically resemble a diver.[2] Its body is patterned with a distinctive "D"-like symbol.

Diver Down is consistently portrayed as blue-green across media featuring it.

Diver Down is a close-range Stand which is fairly powerful in close-combat, capable of decapitating someone with a single chop.[3] Its strength resides in its set of abilities that allow it to easily take advantage of the environment, making Diver Down a reliable ally during a fight. 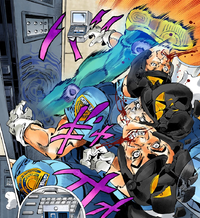 Diver Down's first shown ability is to store its strikes on any surface.[4]

Alternatively, Anasui can put Diver Down inside someone's body, so that whatever damage the target suffers will be transferred to Diver Down instead, protecting them from harm.[5][6] If need be, Diver Down can become a part of the person and replace a lost limb.[7] 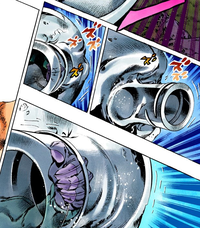 By plunging inside an object or person, Diver Down can freely manipulate their internal structure; either to destroy them or piece them together anew.[8] It can even dive into Stands to modify their structures, as when Anasui grafted a frog's brain into Yo-Yo Ma.[9]

Through this ability, Anasui can create complex structures like spring traps[10] or freely change the whole form of the object, for instance displacing the opening and neck of a bottle along its side[11] or changing someone's bone structure and muscle into springs.[5] Diver Down can forcibly remove harmful but impossible to sever objects like parasitic plants in Jolyne's body[12] or do the reverse and embed foreign objects inside the body, like chocolates to change the shape of Anasui's face.[13]