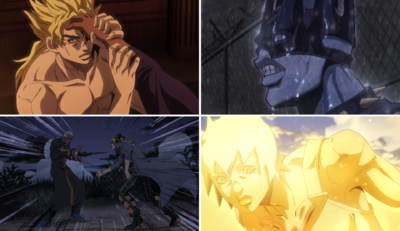 Time for Heaven! New Moon! New Priest! (天国の時！新月の時！神父！, Tengoku no Toki! Shingetsu no Toki! Nyū Shinpu!) is the twenty-second episode of Stone Ocean and the one-hundred-seventy-fourth episode of the JoJo's Bizarre Adventure anime. The episode covers Chapter 91 to Chapter 95 of the original manga.

The fight between F.F. and Enrico Pucci reaches its end. However, the priest is determined to reach The Green Baby at all cost.

A flashback shows a young Enrico Pucci together in bed with DIO, though they are reading books. DIO talked about the huge number of visitors that come every day to the Louvre to look at works of art like the Mona Lisa or the Venus de Milo. Pucci asked if he was impressed by the numbers, but DIO said that he was amazed that skilled artists were able to "shape their souls" into something visible, like a Stand that would transcend time. DIO then compared Whitesnake to them and suddenly grabbed Pucci's arm, evoking the possibility that he may try to betray him. DIO dared Pucci to steal The World, but Pucci refused even with his hand right in DIO's forehead, reaffirming his adoration for DIO. DIO relented, satisfied. He apologized to Pucci for the insult and confessed that he never thought he'd meet someone who would put him at ease. As a token of apology, DIO thus offered a small bone from his body, saying that it will give him power.

In the present, it seems like Foo Fighters has completely disintegrated, only leaving the Stand DISC behind. Thus, Whitesnake confidently advances to retrieve it. However, Whitesnake then hears a buzz and a voice. It notices a talkie-walkie lying on the ground with an unknown voice calling for Foo Fighters. The unknown contact, unable to get an answer, thus understands the situation. It then suddenly rains and Whitesnake realizes that it's Weather Report on the radio. It allows Foo Fighters to reconstitute itself and she begins to crawl away. Whitesnake rushes towards her but then rain turns into a downpour that completely blocks Whitesnake's view, and then the fog sets. Whitesnake hears a clicking sound in the rain and Pucci realizes that it's Morse code, meaning that Foo Fighters is revealing his identity to Weather Report. Still, Pucci remains confident that he hasn't lost yet. With Foo Fighters having crawled away from Whitesnake, it fortuitously meets Weather Report.

In the marshlands, Jolyne thanks Anasui for his help but asks why is he doing all this for her. Anasui thus tells her that he loves her because she's giving him hope for himself with her. The moment is interrupted with the Green Baby grabs Anasui's hair and begins eating it, tearing a few hairs with its mouth. Strangely, the baby also chews on dirt. Suddenly, Anasui notices someone coming and tells Jolyne to get down. However, it turns out to be Foo Fighters and Weather Report. While she heals Jolyne's injured right eye, Foo Fighters also tells her that it was Enrico Pucci who attacked her and explains that he must be the master of Whitesnake and the mastermind behind all their enemies. Jolyne also asks Weather if his wounds have healed, and hugs him. Jealous, Anasui orders Foo Fighters to separate them, but it doesn't understand what's wrong with him.

Anasui points to the sleeping Green Baby and proposes to kill it before it becomes dangerous. Jolyne protests but Anasui calls it an abomination that should not be born. Foo Fighters takes it personally and also begins to bicker with him. Anasui then asks Weather Report for his support. However, Weather tells him that he cannot support him... because he's going to die. Weather suddenly plunges his hand through Anasui's chest and crushes Foo Fighters' head, pulling out her DISC. Jolyne guards herself but Weather punches through her arm and into her flank. He then sheds his disguises, revealing himself as Whitesnake who was using an illusion to infiltrate the group. Enrico Pucci finally reveals himself and, seeing the Green Baby, announces that he's found the way to "Heaven". Pucci looks at the baby, planning on using its powers, but beforehand, he sets his sights on Jolyne and decides to kill her first. Jolyne is heavily wounded but still remains defiant. Whitesnake goes on the offensive first with a punch, but Jolyne then recalls her severed arm to her via a string. With the string, Jolyne ties Pucci's hand to hers by recreating a handcuff. She angrily announces that she'll be taking three things from him: her father's memory, the Foo Fighters DISC and, finally, his life.

Jolyne pulls Pucci close to her and follows with an axe kick aimed at his neck. However, Whitesnake deflects the blow by swiping Jolyne's other leg. Stone Free and Whitesnake then exchange blows for a moment. Whitesnake ties Stone Free's wrist with the chains of the handcuffs and tries to chop the links, but they turn back into strings that cut into Pucci's hand. Nonetheless, Pucci remains confident. He explains that Whitesnake is a long-distance Stand and that at close range, he can use the full might of Whitesnake. Besides, his powers will allow him to defeat Jolyne the moment Whitesnake touches her because he could then extract her memory and Stand DISCs. He's already pulled a bit of Stone Free's DISC and declares that it will be easy to pull it out entirely. Jolyne ignores his declaration, adamant about challenging him head-on. Though Pucci can extract Jolyne's Stone Free DISC, Jolyne also knows that at close range, she can deliver one decisive blow. Pucci talks about a species of swallows that kill themselves trying to dive into cliff walls because, Pucci says, they fly recklessly as they've never been taught their limits. Pucci thus compares these swallows to Jotaro. Jolyne attacks first with a punch, mirrored by Pucci. However, Pucci's inserted a small cross under his fingernail, giving himself a few millimetres of extra range. He narrowly evades Stone Free's punch and is able to pull Jolyne's DISC further out. The DISC is now blocking Jolyne's view and Pucci jumps in order to attack from above. He's confident of his victory and he tries to deal the finishing blow. However, Stone Free reacts better and strikes Pucci in the chest and hand, sending him flying away from her. Pucci is surprised and tries to think, but Stone Free follows with a flurry of wild punches. Pucci realizes that Jolyne is fighting with her instinct and that has exponentially grown as a fighter.

At a disadvantage, Pucci decides to take out Jotaro's memory DISC and throws it away. Pucci then explains that a DISC will disappear if it's inserted into someone who dies, and it is shown that Pucci threw the DISC into Anasui. Pucci thus gives Jolyne a dilemma: either defeat him or retrieve the DISC. Furious, Jolyne yells her lungs out. Pucci knows it risky to yield the DISC but deems it necessary. Besides, he remembers the relevant information and only needs to get the Green Baby. Jolyne sends a flurry of punches toward Pucci, but then finally relents and undoes the cuffs to go to Anasui's side. Pucci is then able to recite a secret passcode to the Green Baby: "Spiral staircase. Rhinoceros beetle. Desolation Row. Fig tart. Rhinoceros beetle. Via Dolorosa. Rhinoceros beetle. Singularity point. Giotto. Angel. Hydrangea. Rhinoceros beetle. Singularity point. Secret emperor.". The Green Baby takes an interest in Pucci. Suddenly, Whitesnake's hand punches through Pucci's hand, who extracts a sesamoid bone, like DIO's, and gives it to the Green Baby. The Baby then proceeds to tear and devour Pucci's arm and pulls him inside of the bush as Pucci, ecstatic, declares that he's "entering DIO's World".

Meanwhile, Jotaro's DISC has entered inside Anasui's body. Jolyne is unable to retrieve it and Anasui is bleeding to death, even if Jolyne stitches him. Desperate, Jolyne uselessly calls for someone, anyone to help her. At the same time, Anasui summons Diver Down and communicates with the remnants of Foo Fighters. For the sake of Jolyne, Anasui tells F.F. to take over his body and eject the DISC from his body. Jolyne then sees a soul coming out of Anasui's body and fears the worst. However, it turns out to be Foo Fighters's soul. F.F. is glad that she can remember her friends even in death and reveals that she's simply cured Anasui's wound. Jolyne feels extremely confused as F.F. says goodbye to her and says that she will disappear. Elated that she had a spirit and intellect of her own, Foo Fighters is resigned to her fate and explains that even if Jolyne used the Foo Fighters DISC, it would be another individual who'd spawn. Glad to be able to salute Jolyne once more, F.F. then disappears into the sky. Jolyne thus calls helplessly her name for the last time. On the ground, we can also hear Weather Report call for her over the radio.