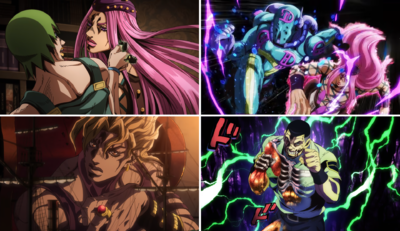 Ultra Security House Unit (ウルトラセキュリティ懲罰房, Urutora Sekyuriti Chōbatsubō) is the fifteenth episode of Stone Ocean and the one-hundred-sixty-seventh episode of the JoJo's Bizarre Adventure anime. The episode covers Chapter 58 to Chapter 60, and a flashback from Chapter 61 of the original manga.

F.F. worries about Jolyne and enlists the mysterious convict Narciso Anasui to help her break Jolyne out. Meanwhile in the Ultra Security House Unit, the guards have gone mad and begin to fight each other.

In a flashback, Sports Maxx and Whitesnake converse about the concept of souls. Whitesnake suggests that the number of souls that exist are always constant, no matter if the amount of living creatures decline. The Stand then asks Maxx a theory: what if a person can possess thousands of souls simultaneously? Uninterested, Maxx simply dismisses the idea, saying that it is an interesting concept nonetheless. Whitesnake asks Maxx to use his power to modify the bone of DIO and perhaps resurrect its original owner. Maxx is unsure, saying that a single piece of bone is not enough to revive someone but Whitesnake threatens to take away his power. Defeated, Maxx says he has already revived it, and Whitesnake looks down to see a hole in his hand. Pucci screams from behind a pillar as his hand bleeds out with the bone gone. Maxx feels the presence of the bone heading towards the Ultra Security Punishment Ward. Whitesnake understands that DIO's plan has been put in motion and decides to follow the trail of the bone. At the end of the memory, the DISC ejects from Emporio Alnino.

Nearby, F.F. also tells him that Jolyne has consulted the DISC, letting Emporio realize that Jolyne went to the punishment ward on purpose. F.F. wants to help Jolyne but Weather Report and Ermes Costello are in the infirmary for now. Emporio describes the Ultra Security House Unit, an isolated building situated 520 away from the women's ward on the southern section of the men's exercise ground. Emporio adds that they will have to sneak through the prison's security because there is no other way to go to the punishment ward. She glances at the other prisoner who's been hanging in the ghost room with them and suggests that he helps her, but Emporio has little hopes about "Anasui" helping them.

F.F. tries to ask Anasui for help though he seems to ignore her. Emporio reveals that he's a murderer. Anasui, Emporio tells, has always been obsessed with the idea of taking things apart since childhood, and he was condemned for the murder of her girlfriend and a lover, which he "took apart" too. Surprisingly, Anasui was declared sane and thrown in prison. Even Emporio worries about what Anasui would do without Weather Report to keep him calm.

F.F. glances at Anasui, who has his back turned and is reading a book. Unsure about Anasui, she thinks about forcing him to help her and deploys her gun finger, readying herself to aim at him and even shoot him if need be. Surprisingly, as soon as she approaches, Anasui agrees to help F.F. find Jolyne. He immediately goes out, to Emporio's suspicion. The kid asks him what he is after and Anasui thus reveals that he's fallen in love with Jolyne. He thus plans on becoming Jolyne's protector and eventually marrying her, to F.F. and Emporio's confusion. In exchange for his help, Anasui tells F.F. to help him seduce Jolyne.

Anasui rushes towards an iron gate and summons his Stand, Diver Down. Diver Down violently kicks the gate, alerting guards on the other side who rush in with armor and guns. However, as soon as they open the gate to punish the troublemaker, a leg violently kicks the guards, taking them out. It is revealed that Diver Down can make objects store its power and release it at an opportune moment.

A flashback shows a young Pucci together with DIO, discussing Stand abilities. Out of curiosity, Pucci asked DIO what was the weakest Stand ability he's ever seen. DIO answered that everybody had strengths and weaknesses in their characters and that concepts of weak or strong Stands didn't exist, which causes Pucci to say his question was foolish. Nonetheless, DIO tells Pucci that the weakest Stand he knew of was Survivor, although it was difficult to handle. DIO told Pucci the story of a group of hikers who went to the middle of the French mountains in 1982. They all died there and it was discovered that they seemed to have killed each other in an extremely violent fistfight. DIO learned that they had met a man earlier whom they slighted, and that man simply activated his Stand Survivor. Survivor could emit a weak electric signal that travelled through the water on the ground and affected the brains of the hikers, making them go berserk. DIO deemed the ability useless because it couldn't distinguish between friend and foe, but Pucci was nonetheless interested and stored the ability in a DISC.

In her cell, Jolyne watches a group of cockroaches and ants eat a mushroom and deems that the ones growing under her bed are safe for consumption. She has only eaten a few when she hears the guards yelling from the other side of the door announcing that it is time to "shower". When the door opens, Jolyne hides behind her bed, to the joy of one of the guards who has bet with his partner that she would do it. For her part, Jolyne is sneakily deploying a string to search the ward and find DIO's Bone. The guards proceed to roughly hose Jolyne, spreading water all over the cell and it is shown that the whole punishment ward is covered in puddles.

One of the guards, named Sonny Likir, accidentally sprays his partner and apologizes. The sprayed man, named Viviano Westwood, then knocks his arm against the guard's shoulder. The argument quickly degenerates into a fistfight where the friends copiously insult each other. Even when they seem to regain their senses and try to make peace, it only gives Likir the chance to violently sucker punch his friend so violently the flesh tears away from his knuckles and Westwood's cheek is torn off, revealing his teeth. Surprisingly Westwood only relishes the prospect of a fight. It is shown that they can somehow see through their opponent's body and admire each other's muscles. Jolyne is astonished to see the guards going berserk and leaving the cell door open as they fight and sees Westwood breaking his friend's leg. She realizes that this must be some sort of Stand attack. We then see Enrico Pucci in his office reading the Bible and revealing that he's sent no less than four Stand Users after Jolyne to the punishment ward. At the same time, Westwood has gone mad and opened all the cells to challenge the inmates.