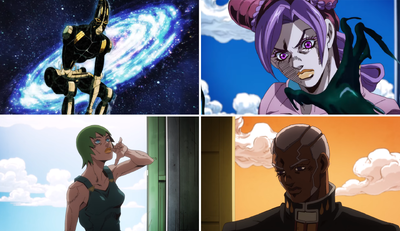 Foo Fighters (フー・ファイターズ, Fū Faitāzu)[2] is the eighth episode of Stone Ocean and the one-hundred-sixtieth episode of the JoJo's Bizarre Adventure anime. The episode covers Chapter 30 to Chapter 33 of the original manga.

Jolyne and Ermes unravel the mystery of Stand Foo Fighters and its user, who admits to helping Whitesnake in his efforts to steal their Stands.

Ermes confronts the remaining prisoners alongside Jolyne. She pinpoints the culprit being the shaved-head prisoner, after Atroe mentions not having known her before. The three blame each other, saying that none of them remember each other, but Jolyne notices the black-haired prisoner's bleeding nose. She recalls one of the prisoners nearly collapsing as she punched the plankton Stand. The black-haired reasons that it was due to her getting punched earlier by the tanned prisoner, who also has blood dripping on her hand. The tanned prisoner then reasons that the bleeding must have been from a tooth scratching her hand and also points at both Jolyne and Ermes as being suspicious. The black-haired begins to blame Jolyne for causing a scene in the assembly, but the latter responds by brashly punching her with Stone Free. Jolyne admits to Ermes that she has no idea who the murderer is, resorting her to beat up every prisoner until she is stopped by the shaved-head prisoner.

Suddenly, a chorus of voices comes out from the prisoners' lips, remarking on Jolyne's Stand ability. Jolyne unleashes her Stand and punches one of the prisoners, when a black substance oozes out from the women's orifices. The voice then reveals itself as the plankton Stand named Foo Fighters, and tells them that the black-haired and shaved-head prisoners were its victims after approaching the tractor earlier, and that the tanned prisoner was actually a shell created from the flesh of the missing male prisoners. Owing its abilities and intellect to Whitesnake, it swears its duty to protect the tractor from its enemies. Panicking, Ermes asks where its user was located, but Jolyne tells her that the Stand is the user itself, a creature born from the power of the DISCs. She also deduces that it must have used the water inside the victims to move on land and guard the shed, which means that she and Ermes must keep it away from the water to defeat it.

Foo Fighters begins a monologue on intellect having existed before the Big Bang as the foundation for the origin of life, reflecting astronomer Fred Hoyle's quote to itself, an organism with its own intellect. Aggravated after Jolyne accidentally calls it a plankton, it rushes toward the warehouse, while the same creature that had attacked them earlier approaches the guard's body to get the bracelet. Ermes proposes to abandon the DISCs and get the bracelet to avoid them exploding to death. Jolyne runs to the warehouse, trusting her to guard the bracelet and keep them from reaching the 50-meter limit. Ermes uses Kiss to create an extra arm as a decoy against the plankton creature and swears to never do it again after the impact of the cloned arm bloodily crashes into her own. The creature splashes water onto her to incapacitate her. She clones a nearby dried up corpse to dehydrate the creature through the dusts and easily defeats it.

In the warehouse, Jolyne confronts Foo Fighters who asks her which way of death she preferred. Jolyne responds by asking Whitesnake's goals and identity. After Foo Fighters taunts at her and says that it has never seen Whitesnake, Jolyne rushes to punch it and a nearby flour to remove moisture, but is caught in its trap. However, she reveals that she had used Stone Free's strings to drive the tractor away, unbeknownst to Foo Fighters, with Ermes catching up to it. As Foo Fighters run to take the DISCs, it immediately loses moisture. Before Ermes can throw dirt at it, Jolyne takes pity and squeezes water from a towel on it, knowing that it was only guarding the DISCs to protect itself, not Whitesnake. Ermes is initially against it becoming an ally, but trusts Jolyne's judgement. Jolyne then reassures Foo Fighters that she does not want to take its DISC, only her father's, and asks it for its aid. Finally defeated, Foo Fighters concedes.

Jolyne finds Jotaro's Stand DISC in the tractor tire, but his memory DISC is missing. Foo Fighters emerges and takes the form of Atroe, now calling itself F.F.. With Atroe's memories and thoughts, she swears to protect Jolyne at all costs. She licks Ermes and Jolyne's injuries, making them viscerally kick her after being grossed out. Ermes remarks that F.F. needs to work on controlling her urge to drink water. Jolyne asks if Whitesnake comes to the warehouse often, but F.F. says that he only stores the DISCs that he cannot use, as the body rejects DISCs that are incompatible. They then realize that Jotaro's memory DISC must be stored somewhere. Jolyne swears to deliver both DISCs before her father's body can deteriorate. Ermes suggests to deliver them outside prison; F.F. stores Star Platinum's DISC in between her breasts for safekeeping. Meanwhile, they overhear sirens, and the three agree on the account that the guard was attacked by a crocodile without knowing what happened to the other prisoners.

At sunset, Whitesnake and its user, revealed to be Father Pucci, investigate the warehouse. Now knowing that Jolyne and her aides are slowly becoming threats to his goals, he raises his guard up. As Pucci picks up a remnant of F.F.'s finger, a guard tells him that he must return soon, and also asks if he is worried about the missing prisoners. Pucci says nothing else but that he will be staying in the warehouse until he gives the sacrament on Sunday.