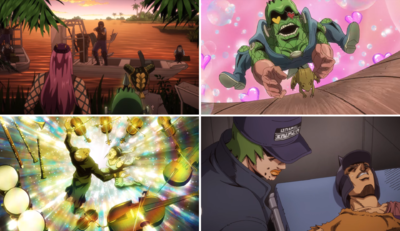 F.F. - The Witness (F・F－目撃者, Efu Efu - Mokugekisha) is the twentieth episode of Stone Ocean and the one-hundred-seventy-second episode of the JoJo's Bizarre Adventure anime. The episode covers Chapter 80 to Chapter 84 of the original manga.

Jolyne and Anasui find themselves having to flee through a swamp accompanied by the Stand Yo-Yo Ma. Meanwhile, F.F. tries to find Yo-Yo Ma's User but ends up encountering Enrico Pucci himself.

Jolyne, Anasui and Yo-Yo Ma have fled into the marshlands while F.F. has to find D an G and kill him before Yo-Yo Ma can assassinate Jolyne. In the marshlands, Anasui stops the boat near a patch of grass because he's heard other airboats incoming. Soon enough, two boats with guards of Green Dolphin appear. Armed with heavy weapons, the guards have learned about the disturbance and are now sweeping the swamps. Yo-Yo Ma has impaled himself on the throttle lever and he gesticulates, which makes ripples in the water so Anasui rips it out of the lever. The guards do notice the ripples and head towards the boat, but Yo-Yo Ma helps the heroes by covering their boat and themselves in leaves and branches to camouflage. However, one of the airboat fans blows the camouflage away. Just as the guards prepare to fire on the heroes, Yo-Yo Ma releases a swarm of mosquitos from his mouth, which then sting Jolyne in the face. The guards start opening fire on Jolyne and Anasui, wrecking their boat and their engine. However, Anasui remains calm. He punches Yo-Yo Ma into his boat's spinning fan, sending him flying into the guards of one boat and destroying it. Anasui then advances toward the second boat and punches the guards with Diver Down. Thus, the heroes are able to hijack that boat and escape for now.

The group continues further into the marshlands. Anasui asks Jolyne to stop whistling too, confusing her because she thought Yo-Yo Ma was whistling. Jolyne tries to speak but she's unable to say anything. She realizes Yo-Yo Ma has attacked her and somehow made holes on his tongue. She tries to warn Anasui but humorously, Anasui begins to mistake Jolyne's strange behavior with an attempt at flirting, leading to her uppercutting him in frustration. Still unsure about Yo-Yo Ma's method of attack, she tries to make Anasui realize that the Stand is attacking them, to no avail. Nonetheless, Jolyne is determined to go through this battle. She decides to expose herself to make Anasui see the attack. Yo-Yo Ma keeps acting servile towards Jolyne, suggesting to make her a skirt out of frog skin. Meanwhile, Anasui finally notices that something is wrong with Jolyne. For her part, Jolyne tries to figure out Yo-Yo Ma's method. She unravels her skin into strings, catching several mosquitos. She thinks she's figured out the attack but the other side of her face melts, meaning the attack is different. Jolyne collapses on the floor and tries to warn Anasui by writing "Be All Eyes", making Anasui realize they're under attack.

Yo-Yo Ma is winning and ominously proposes Anasui fights him. Anasui has Diver Down punch Yo-Yo Ma releasing another swarm of mosquitos which Anasui kills. However, Jolyne knows that there is another method of attack. Holes begin to form on Anasui's face but he persists. He orders Yo-Yo Ma to move as far on the back of the boat as possible as other holes appear on his arm and neck. He stomps on Yo-Yo Ma's head and orders him to empty his pockets. Yo-Yo Ma obeys, showing a whole range of items and other critters. All the while, more and more holes appear on Anasui's body. Anasui then asks if Yo-Yo Ma is here to kill Jolyne specifically, which he confirms; Yo-Yo Ma adds that he will kill him as well if he stays, causing Anasui to violently chop into Yo-Yo Ma's head with Diver Down, which seems futile at first. Jolyne realizes that Yo-Yo Ma has poured his acid saliva into the water and thus when the boat moves, the waves spray the heroes with acidic water. Anasui then orders Yo-Yo Ma to speed up the boat, which Jolyne deems dangerous. Suddenly, Yo-Yo Ma feels unwell.

He begins to croak and lay on his back before crawling on all fours. Even more strangely, Yo-Yo Ma instinctively tries to eat insects and fears the birds above. It turns out Anasui has sabotaged Yo-Yo Ma by wiring his sensor antenna to a frog's brain, overwhelming it with the frog's instinct. Yo-Yo Ma begins to lose its focus and is effectively neutralized.

Meanwhile, the guards have found a giand dead tree in the Ultra Security House Unit. They have also retrieved D an G and F.F. sneakily approaches D an G from above, perched on the arches. Aiming at D an G, F.F. suddenly spots the priest Enrico Pucci observing the scene from afar. The guards begin evacuating D an G, reminding F.F. of her mission. Hidden in a corner, Pucci counts primary numbers and tries to analyze the situation. Since D an G is severely wounded, he supposes that Jolyne Cujoh is still alive and that the plant debris are the signs of something incredible which signal the next step of his plan. Pucci plans on interrogating D an G, but he is too ecstatic. For the moment, he slots a music disc into Guccio's corpse, which sings Handel's Messiah.

D an G is put into an ambulance while the guards go search the building. Pucci heads towards the ambulance but recognizes one of the medical staffers as F.F., who's put on a disguise and is going to kill D an G. F.F. holds him at gunpoint and shoots, but suddenly a guard rushes in and holds F.F.'s arm, making her miss. The guard has been brainwashed and controlled via a DISC created by Whitesnake and F.F. realizes that the Stand is here. Pucci ominously reveals himself, walking towards the ambulance although an iron gate separates him from F.F. Pucci forces F.F. into a dilemma: either F.F. kills D an G or him first.