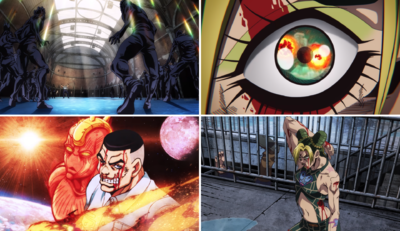 The Secret of Guard Westwood (看守ウエストウッドの秘密, Kanshu Uesutouddo no Himitsu) is the sixteenth episode of Stone Ocean and the one-hundred-sixty-eighth episode of the JoJo's Bizarre Adventure anime. The episode covers the last page of Chapter 60 to Chapter 65 and 14 pages of Chapter 66 of the original manga.

The Stand Survivor has rendered everyone in the punishment ward berserk. Jolyne must now fight one of the guards, named Viviano Westwood.

Survivor has been deployed by an unknown user in the Punishment Ward, affecting everyone. The guard Westwood angrily challenges all the prisoners he's freed while Jolyne tries to identify the real enemy and find DIO's Bone. However, she too feels affected by a killing urge. Suddenly, Westwood rushes at Jolyne who readies herself, confident that she can defeat any ordinary man with her Stone Free. She summons Stone Free but Westwood somehow avoids the attack and climbs a wall, disappearing for an instant before reappearing from behind a door frame to try and kick Jolyne in the head. Jolyne leaps to avoid the attack and ties Westwood's leg to his neck, making him kick himself. Yet, Westwood is able to uppercut Jolyne in the gut. Westwood also admires Jolyne's muscles and can even discern her strings as a "strong point" of hers. Jolyne realizes that she's dealing with a man who's gone beyond normal human capabilities and must find a way to deal with him.

Affected by Survivor, Jolyne admires the internal muscles of Westwood on his right arm and leg. However, Jolyne sees Westwood's blackened muscles on his left leg, meaning he's been severely weakened on this limb. Distracted by the inmates killing each other, Jolyne leaves herself open to a right cross but Jolyne counters it with a straight kick to the right shin and then throws an uppercut with Stone Free as the guard falls. Westwood throws two wild punches at Jolyne but she's tied his fists to his neck, which chokes him and leaves him open to a front kick in the jaw which she follows with a series of wild kicks to the face. Stone Free approaches to deal the finishing punch, but suddenly, her arm is nearly cut in half, something blowing through Stone Free's arm. The damage is reflected at Jolyne, who wonders what Westwood did to her. She sees a DISC poking out of Westwood's head and realizes that he's been turned into a Stand User too.

As Westwood stands up, he notes that Jolyne's strings are her strong points. Jolyne stitches her arm and challenges him but is surprised when Westwood quickly rushes to her side to try a violent left hook; Jolyne still evades it by ducking. A series of strikes ensue but Jolyne manages to kick Westwood in the face and glances upon Westwood's Stand as he reels back. The guard falls but immediately comes back for more. Thus, Jolyne stands her ground and deploys a string between her foot and hand which manages to deflect Westwood's punch to the side without effort, and she's then able to tie his hands. Jolyne blinds Westwood by throwing her prisoner's jacket at him and she's able to punch him with Stone Free. Suddenly, Stone Free's leg is now also grievously wounded, making Jolyne fall. This allows Westwood to come back and grapple Jolyne on the ground and immobilize her. She then feels that something is coming.

Jolyne tries to attack him with a punch from Stone Free but it seems even Stone Free cannot hit Westwood because he is locking her head and twisting her left shoulder specifically to prevent her right arm from moving too much. Jolyne tries to grab for Westwood's crotch but he anticipated this and shift his grapple to land on the ground. Jolyne sees two round roles on the glass ceiling of the roof and understands that the danger is coming from above. Desperate, she deploys strings from her left hand and sends them right into Westwood's ear so that they come out of his eye socket and nose, then violently pulls at them as a pair of small meteorites falls right at her.

The narration explains how the earth's atmosphere protects the Earth's surface from most of the meteorites and debris falling into the atmosphere due to the intense friction of the air resistance. However, objects falling at a precise angle can resist being burned away and fall on the surface. Incidentally, two meteorite fall right at her.

Meanwhile, Narciso Anasui and F.F. have fought and snuck their way out of the main building and nearly reached the courtyard linking to the Ultra Security House Unit. F.F. uses the reprieve to inform Anasui that there may be several assassins after Jolyne but to her astonishment, Anasui ignores what she said only to repeat that he'll marry Jolyne.

Jolyne violently pulls on the string she's inserted into Westwood's face and the pain makes him release Jolyne. She takes a painful glancing hit by a meteor which then heads for Westwood, but it disappears, the heat destroying it thanks to the protection of Planet Waves. Westwood grabs Jolyne's left wrist and tries to lock her arm. Jolyne deploys another string and tears off one of Westwood's toenails in retaliation, also tearing the skin from his foot. Three meteorites fall towards her but Westwood has loosened his grip and Stone Free deflects the meteorites into Westwood, but Planet Waves still makes it so Westwood is protected against the rocks. Worse, Stone Free's hands were injured from the effort. Jolyne is now heavily wounded while Westwood can still call endless numbers of meteorites to him. Nonetheless, she stands up and readies herself to continue the fight.

Westwood purposefully leaves himself open to an attack, but Jolyne is distracted when she sees one of the prisoners playing with DIO's Bone. Westwood jumps at Jolyne, forcing her into a corner to use the wall as a shield against meteors, but Westwood calls in a bigger meteor that destroys the wall and still disintegrates right in front of him. He lands a roundhouse kick on Jolyne's face, throwing her to the side as a big meteorite falls right on her. Still, Jolyne is not giving up.

Westwood tries to deal a vertical kick to Jolyne when she grabs onto his right leg but Jolyne got what she wanted: his boot. Jolyne is able to use the boot filled with bricks as a shield right as the meteor hits her, deflecting the meteor with the boot right at Westwood. To Westwood's dismay, the boot has absorbed the force of the meteorite and even though the rock disintegrates, the boot filled with brick pieces hits him right in the face. Westwood reels from the impact and the heat, and though he attempts a last-ditch attack, Stone Free headbutts him, and knocks him out. Jolyne thus declares her victory.