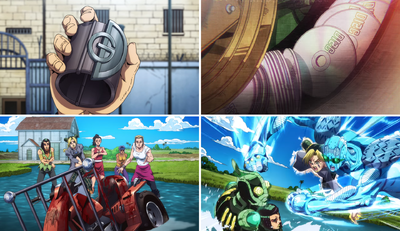 There's Six of Us! (6人いる！, 6-nin Iru!)[2] is the seventh episode of Stone Ocean and the one-hundred-fifty-ninth episode of the JoJo's Bizarre Adventure anime. The episode covers Chapter 26 to Chapter 29 of the original manga.

After people go missing from the prison's farm, Jolyne and Ermes volunteer to join the search party as a way to look for Whitesnake and the discs.

In the aftermath of the bloody battle between Ermes Costello and Thunder McQueen, Emporio reports the events to Jolyne in the punishment ward. Now knowing that Ermes is aware of Stands and DISCs, he informs her of how McQueen was seemingly resuscitated after having his Stand DISC inserted back into him, deducing that it might be the way to bring back Jotaro Kujo to life. Having kept McQueen's Stand and memory DISCs for safekeeping, Emporio hands them to Jolyne, who realizes that they may have memories relating to Whitesnake.

Meanwhile, somewhere in the prison swamp, two male prisoners struggle to close the warehouse door before getting killed by a mysterious being.

Soon after, female prisoners are called into an assembly in order to gather an uncompensated volunteer search party for the missing prisoners. Jolyne smugly suggests that they may have been killed by a female crocodile to mock Loccobarocco and his crocodile puppet Charlotte. Although hesitant at first, Ermes raises her hand after seeing Jolyne volunteer. Gwess asks Jolyne why she chooses to tire herself out, to which she only replies that she knows Gwess will not be with her. Before the search begins, the prisoners are forced to wear bracelets in case they attempt to escape. The guard-in-charge wearing the main bracelet warns them the following: to not remove the bracelet, hit the bracelet, or stray further than fifty meters away from him, or else the bracelet will explode, before driving a tractor to the search site; this forces Jolyne, Ermes, and the other prisoners to run after him.

As Jolyne begins to look for clues in a wooden shed, she is followed by Ermes who interrogates her about the DISC and Whitesnake. Jolyne then asks if she had read McQueen's DISC, though Ermes only says that she felt terrible after inserting it in her. With this, Jolyne tells her that she hadn't noticed its goals - to collect Stand and memory DISCs and store them in the farm tractor tires - as revealed in a flashback during McQueen and Whitesnake's first confrontation. Seeing this, she had the feeling that her father's DISCs might be stashed along the others as well, which prompted her to volunteer in the search party.

A certain warehouse catches their attention when the guard suddenly warns them for idling around. The two easily dismiss him and head towards the warehouse. Insulted, the guard notices crocodile feces. He cunningly strikes Ermes's explosive bracelet, causing it to make noise, and catches Ermes off-guard to trip her into falling on the feces. Jolyne immediately uses her Stand's strings to cushion the fall with a leaf, while the impact splatters the feces onto the guard's pants.

Jolyne and Ermes continue walking when they overhear the shaved-head and black-haired prisoners say that the warehouse only has a tractor and some bags of flour. Knowing that it must be the right place, the two rush inside together, spotting the tractor with the vehicle number "4" from McQueen's memory DISC. The guard calls their attention to continue their search in the waters instead. Jolyne takes the chance to begin removing the tires, but Ermes warns her that something is off - Loccobarocco had called out for five prisoners, but there were six of them in the party. Despite this, all of them were wearing explosive bracelets. One of the prisoners, Atroe, also wonders if there were six of them since the beginning. The shaved-head prisoner vouches for her, but Atroe states that she has no idea who she was. Suddenly, everyone's bracelets begin beeping, and they notice that the guard's body has disappeared. They search for his body until Atroe's bracelet beeps faster, forcing the device to explode and kill her instantaneously.

Jolyne realizes that their enemy has been on the move since they approached the tractor. After spotting the guard's body, the rest of the prisoners run toward it, and Ermes pinpoints the culprit being the shaved-head prisoner. However, Jolyne thinks otherwise; a prisoner is not allowed to keep watch all day, which would mean that they could not have gotten there before them. Ermes hears something strange inside a nearby bucket and tells her companion to avoid the waters from then on. As Jolyne re-evaluates the situation, Ermes is dragged into the marsh with her face getting sucked into the bucket. Inside, she sees several self-multiplying plankton-like creatures and unleashes Kiss to save herself. Jolyne uses Stone Free to create a net for her to walk over the waters, at the cost of unraveling her body. When she jumps to tackle the plankton figure, she narrowly saves a punch in her abdomen through Stone Free's unraveled strings, and successfully sends the figure flying into the air. She tells Ermes to grab her thread to flee the scene, but the culprit quickly catches up to them.

Jolyne then wonders what the thing following them could be, as Stands get weaker the further away they go from their user, unlike this plankton figure. It manages to grab her leg, but Ermes removes a sticker she had stuck on its arm earlier, destroying its limb. The two run further inland until the Stand disappears into the waters. They see the three remaining prisoners calling for help through the dead guard's intercom, and Ermes warns them that she knows one of them did it. Having them cornered, Jolyne mutters that they have to defeat the user in order to stop the Stand.