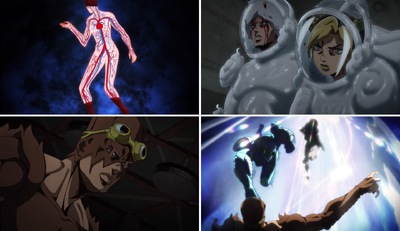 Operation Savage Garden (Head to the Courtyard!), Part 2 (サヴェジ・ガーデン作戦 (中庭へ向かえ！) その②, Saveji Gāden Sakusen (Nakaniwa e Mukae!) Sono 2)[2] is the eleventh episode of Stone Ocean and the one-hundred-sixty-third episode of the JoJo's Bizarre Adventure anime. The episode covers the rest of Chapter 43 through a few pages of Chapter 47 of the original manga.

In the surveillance station, the guards have noted the activation of the alarm in the corridor but dismiss it, knowing that it doesn't lead in any way to an exit and thus they are sure that at least no prisoner is trying to escape. The guards greet Father Enrico Pucci, the prison's priest, who has come out of his chapel to see what was happening. Hearing the guards, Pucci becomes interested in the cause of the alarm. He then sees in the call log that Jolyne Cujoh has called the Speedwagon Foundation and asks the guard to allow him to listen to the conversation.

Jolyne and Weather find themselves in the laundry room, a large dark hall filled with machinery blocking the view. To the side is a heavy metal door leading to the courtyard and which can either be opened with a pass card or forced open. However, Jolyne wants to address one thing first. Embarrassed, Jolyne has to tell Weather about her need to pee. Unfazed, Weather explains out loud the diuretic response of the body to the zero-gravity environment and offers Jolyne a cloud to hide her. Jolyne tries to use the cloud, but is further embarrassed when she sees droplet of urine float away. However, Jolyne notices that she's also heavily bleeding from her nose and Weather's blood is also rushing out of his body through his wounds. Worse, the two begin to have trouble breathing. Several projectiles suddenly fly towards Jolyne. Thanks to Weather's warning, Stone Free deflects them but it is wounded nonetheless and blood gushes from the scratch on Jolyne's arm. Analyzing about the enemy's ability, Jolyne understands that she's affecting the air itself, causing it to flow away from her and sucking out the blood out of her body due to the negative pressure.

Jolyne tries to seal the iron door by which the air is escaping, fearful of suffocating. Weather Report corrects her, stating that the low pressure will kill them faster than suffocatin as their blood will start to boil in their veins. Another flurry of projectiles flies towards Jolyne but even she deflects them with Stone Free, they pierce the objects she has placed to seal the room and the air resumes flowing. Lang Rangler needs to reload his gauntlet. At the same time, Weather Report grabs Jolyne and tells her that they must get away from the door and hide, but Jolyne protests because she wants to stop the air flow. Weather Report thus uses his ability again.

When Lang Rangler peeks out of his hiding spot, Jolyne and Weather have gone out of sight. In reality, Weather has covered himself and Jolyne in a protective suit of cloud that keeps the remaining air near them. The pair is safe from asphyxiation and decompression, for a short while. Weather puts his mind to seeking Lang Rangler but Jolyne then points out that some objects far away seem unaffected by the zero-gravity. Saying that Lang Rangler too should be put in danger if he was in the zero-gravity vacuum, she theorizes that the zero-gravity has a range around herself which she estimates to be around twenty meters, and that Lang Rangler is hiding outside of that range. Finally, that means that they can find more air to breathe out of that range. Still, the pressure in the suit is destabilizing already and thus Weather has to go collect air quickly. As soon as Weather propels himself towards a laundry basket out of range of the zero-gravity zone, Lang Rangler shoots at him from behind. Stone Free deflects all but one of the projectiles, which pierces Weather's suit. Lang Rangler then reveals himself and heads towards Weather to shoot him while Jolyne gets prepared to protect Weather.

Weather has noticed the hole and he's already suffering from the decompressure as Lang Rangler positions himself to shoot again. Jolyne anchors herself to a pipe and summons Stone Free again to deflect the projectiles. However, Lang Rangler then shoots a drum barrel full of air. The projectiles hitting the barrel cancel its gravity and the barrel bursts. It then flies and crashes into Weather before he can grab the basket, sending him further into the zero-gravity zone. Weather's suit is cracked and he's flying out of control, but Jolyne gathers her will and pierces her own suit to fly towards Weather to push him out. Still feeling confident, Lang Rangler shoots Jolyne again. Stone Free deflects the nuts and bolts but Lang Rangler unveils the second layer of his plan: he's thrown a pair of rats towards Jolyne and the rodents burst right in front of her, their blood covering her visor. Reloading his gauntlets again, Lang Rangler shoots Jolyne and pierces her suit in several points.

Gloating about his awesome ability, Lang Rangler shoots Jolyne again, seemingly killing her. He turns back to head to Whitesnake, and expects to be able to beat it. Suddenly, he notices a thread leading from his gauntlet to Jolyne's suit. It is revealed that she had sneakily deployed her strings and attached the nuts and bolts in Lang Rangler's possession in anticipation of his next shots. Jolyne has tied Lang Rangler's wrists and is now able to pull him inside the zero-gravity vacuum. Lang Rangler is severely affected by the vacuum and his blood begins to boil, thus Jolyne orders his to cancel his power if he wants to survive. Lang Rangler then reminds himself of the professor he's stabbed during his time in college. Angered, he decides to retaliate himself. Lang Rangler puts manganese dioxide in a bottle of disinfectant (peroxide solution), creating a chemical reaction that releases oxygen. In a rage, Lang Rangler throws the bottle at Jolyne and it explode right in front of her, the vacuum having turned it into a makeshift grenade. Jolyne's visor is fully broken and Lang Rangler gloats because he know that Jolyne will die before him because of her wounds.

However, another cloud suit forms around Jolyne. It is Weather Report who's sacrificing himself in order to make Jolyne win this battle. Weather Report too is gravely affected by the vacuum, which shocks her. Meanwhile, Lang Rangler realizes that he's out of options and decides to release the zero-gravity, hoping that the burst of air that will fill the vacuum will allow him to escape. Lang Rangler cancels his ability but Jolyne punches him with Stone Free. It is in fact too late for Lang Rangler to escape because Jolyne is too close, and the burst of air is now pushing him towards her. It allows Jolyne to violently pummel Lang Rangler, defeating him for good. Moreover, she's able to retrieve the Star Platinum DISC. However, she still has to break through the door leading to the courtyard.

With Lang Rangler retired, Weather is able to explain the layout of the prison. Beyond the metal door is a hallway where a revolving door will lead to the courtyard. While the door isn't locked, there is remains the problem of breaking through the metal door. Thankfully, Jolyne retrieves Lang Rangler's passes. She plans on using Lang Rangler's pass to fool the guards into opening the doors for her and then knock out the guards on the other side. Weather warns her that she'll earn six months of solitary confinement for that but she doesn't mind it because all she wants is to save her father.

Jolyne hears someone's step on the other side of the door. She hides Weather behind some drum barrels since he's too gravely injured to follow her. She then bangs at the door while slipping Lang Rangler's pass card in the computer slot, causing the other person behind to call out for him and then open the door. Jolyne prepares to knock out whoever's stepping in but she refrains herself when she sees it is not a guard. It is in fact Enrico Pucci, who's come to seek his subordinate and talk to him in the chapel.