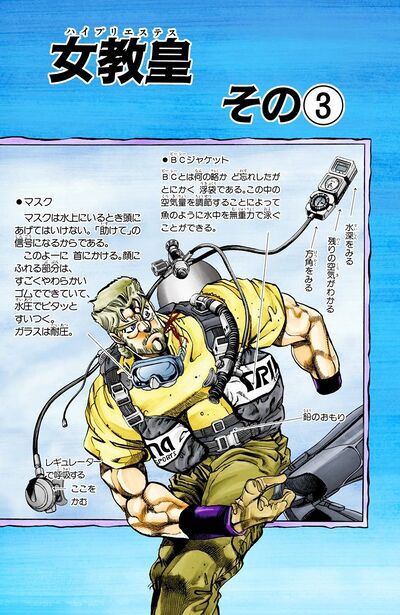 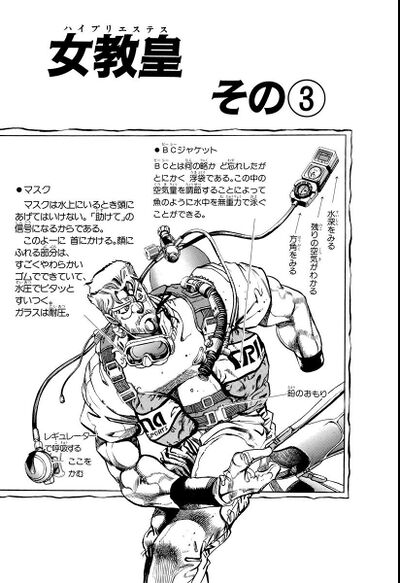 High Priestess, Part 3 ( その③, Hai Puriesutesu Sono 3), originally The Hand Signal for "Terror!" (「戦慄！」のハンドシグナル, 'Senritsu!' no Hando Shigunaru) in the WSJ release, is the sixty-eighth chapter of Stardust Crusaders and the one hundred eighty-first chapter of the JoJo's Bizarre Adventure manga.

As the group dons their scuba gear Joseph teaches them the basics of diving. He explains that they must not panic, and that they must slowly rise to the surface, explaining that if they rise too quickly their lungs and blood vessels will burst. Joseph then tells them they'll have to use hand signals because they can't talk underwater which prompts Avdol to remind him they can talk with their Stands. Polnareff states that he knows hand signals, and uses them to say "I can see your underwear." When Kakyoin deciphers the message Polnareff celebrates by engaging in a manly handshake with him.

The submarine fills up with water and the group begins swimming out. However High Priestess had transformed into Polnareff's regulator and is currently biting his lip. The enemy Stand goes into his mouth and down his throat to suffocate him. Before it can get deep enough to cause serious damage, Kakyoin and Joseph grab it with the tentacles of their Stands and pull the High Priestess out of Polnareff. The group then flees from the submarine and traps High Priestess inside. The group swims up along the coastal floor and spots a pair of sea tunnels. They swim towards the tunnels, however these aren't tunnels but the giant nostrils of High Priestess embedded in the sea floor.