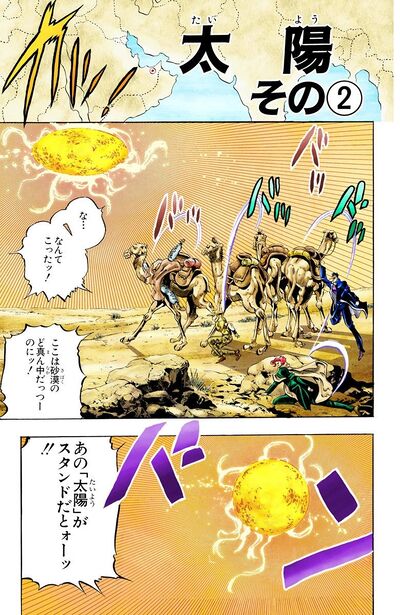 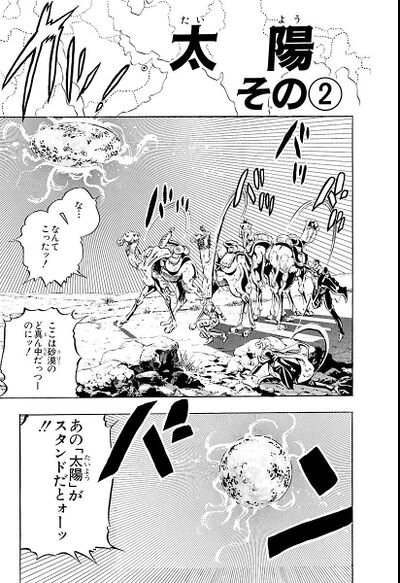 Sun, Part 2 (太陽 その②, Taiyō Sono 2), originally Two Rocks (ふたつの岩, Futatsu no Iwa) in the WSJ release, is the fifty-fourth chapter of Stardust Crusaders and the one hundred sixty-seventh chapter of the JoJo's Bizarre Adventure manga.

The Joestar group is confused by this incredible Sun Stand. Joseph says that even in a sauna, staying more than half an hour is dangerous. As the Stand seems to be very powerful, raising the temperature above 70 °C, the user should be close by, but they can't see him. It's so hot that even the camels are passing out.

Kakyoin tries to find out how far away the Stand is by sending Hierophant Green to investigate. 100 meters ahead, the enemy Stand seems to activate something, and Kakyoin has just enough time to launch an Emerald Splash and protect himself from the energy beams that the Stand launches at them. However, he's still wounded, and he's forced to call Hierophant Green away. Jotaro uses Star Platinum to dig a hole in the sand where the group can hide from the attack.

After Joseph gets upset and wonders if the user is invisible, Kakyoin starts laughing hysterically. Soon enough, Jotaro and Polnareff join him, and Joseph worries about their health, trying to make them come back to their senses. Kakyoin calms down and explains that they hadn't gone mad, but that they found out where the user was. He points out two rocks with shadows going in opposite directions. Star Platinum picks up a rock and throws it at full speed, making what looks like a hole in mid-air to Joseph.

After Jotaro wonders if Joseph can't think right because of the heat or if he's really his relative, the group gets out of the hole and finds out that the user was hiding in a device that consisted of a huge mirror reflecting the desert and preventing them from seeing him. Joseph hardly realizes that the fight is already over and that they don't even know the user's name. The group departs into the cold desert night.