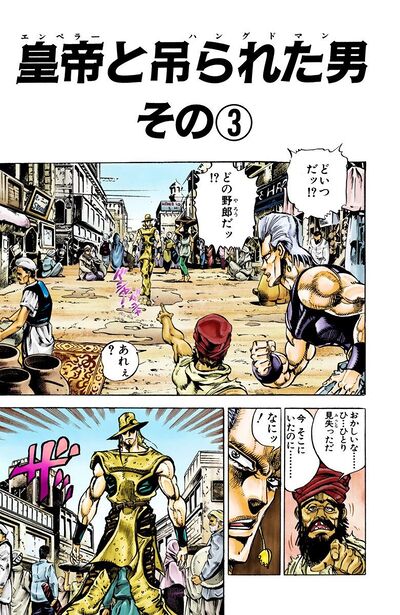 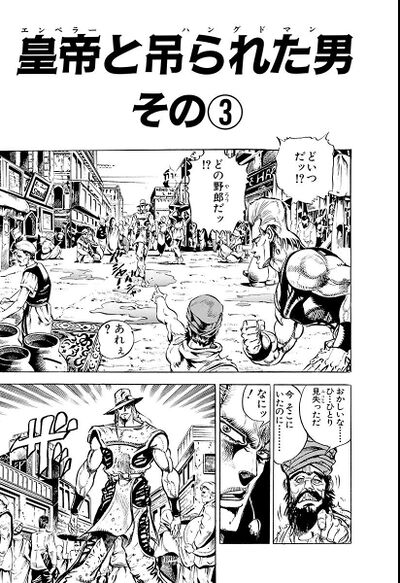 Emperor and Hanged Man, Part 3 (と その③, Enperā to Hangudo Man Sono 3), originally The Gun Is Mightier Than the Sword (銃は剣よりも強し, Jū wa Ken yori mo Tsuyoshi) in the WSJ release, is the twenty-ninth chapter of Stardust Crusaders and the one hundred forty-second chapter of the JoJo's Bizarre Adventure manga.

Even though Polnareff just saw Hol Horse and J. Geil approaching him, J. Geil suddenly vanishes from his view. Hol Horse introduces himself and tells Polnareff how "the gun is mightier than the sword". Polnareff asks him about J. Geil, but the cowboy still insists how his gun-shaped Stand Emperor is stronger than Silver Chariot's sword. Polnareff makes fun of this comparison by falsely mishearing his line, which makes Hol Horse laugh with him. Suddenly, the cowboy summons his stand and shoots Polnareff. To intercept the bullet quickly, Silver Chariot takes off its armor. The bullet avoids the sword by itself and goes to strike Polnareff. Avdol appears just in time and saves Polnareff, but the bullet changes directions to hit Avdol instead. As Avdol summons Magician's Red to burn the bullet, he is stabbed by Hanged Man, only seen in the reflection of a puddle behind Avdol, and hit in the head by Emperor's bullet. Kakyoin arrives just in time to see Avdol's demise and a crying Polnareff.