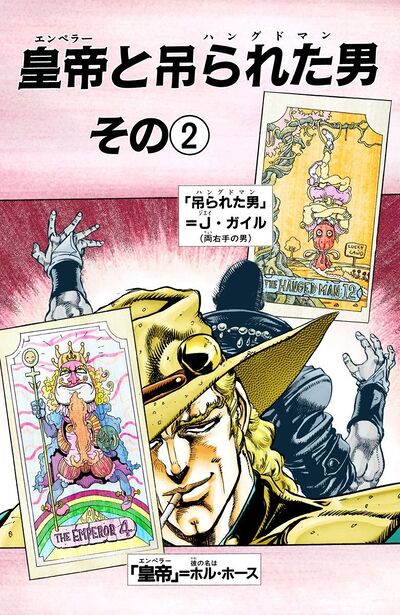 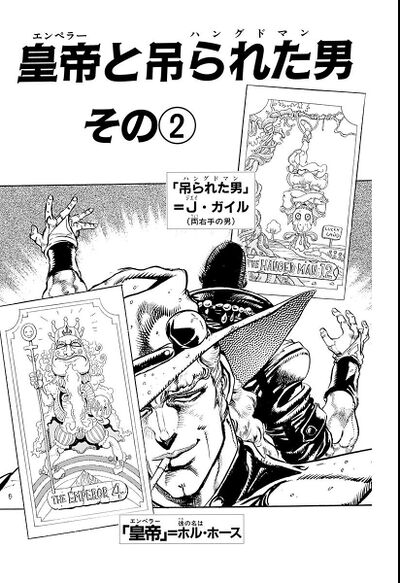 Emperor and Hanged Man, Part 2 (と その②, Enperā to Hangudo Man Sono 2), originally The Wandering Emperor (さすらいの, Sasurai no Enperā) in the WSJ release, is the twenty-eighth chapter of Stardust Crusaders and the one hundred forty-first chapter of the JoJo's Bizarre Adventure manga.

Polnareff decides to separate from the group in order to find his sister's killer. Avdol tries to stop him, sure that separating Polnareff from them is part of a trap. Polnareff accuses him of being a coward for running away from DIO, and a fight almost starts between them. Joseph stops Avdol's punch, telling him that Polnareff has made his own decision.

Meanwhile, a cowboy named Hol Horse and his lover Nena are seen riding an elephant. Nena begs him to marry her, but Hol Horse tells her she shouldn't think about this since she is only 16 and is from a good family. He denies her request, saying he's a traveler destined to die on the streets. He explains that he won't marry her because he loves her too much. He asks her to get off the elephant because he's going to see a friend, who is revealed to be J. Geil, the man with two right hands and the user of the Hanged Man. Hol Horse tells him that he's just using Nena because she's a woman who would do anything for him. Before they are able to discuss their plans, a snake attacks J. Geil. Combining their Stands Emperor and Hanged Man, the duo completely mutilate the snake.

Later, as Polnareff searches for a lead, he sees the two Stand users slowly approaching him.

Author's Note
“
A cat ate all of the kiwis I was growing. I heard that kiwis are part of the Actinidiaceae family, so it makes sense.
”
—Hirohiko Araki
“
栽培してるの実を全部猫に食べられた。は、またたび科だそうで、納得
”
—Hirohiko Araki