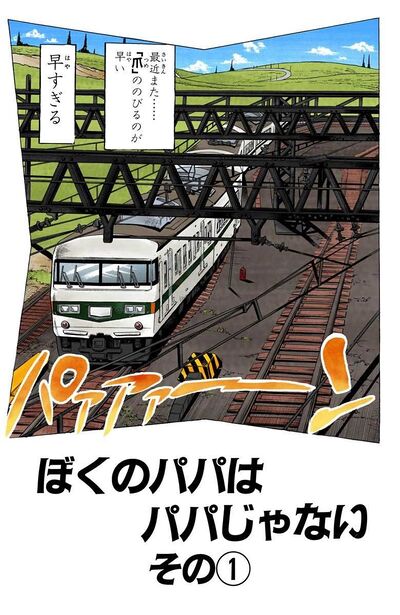 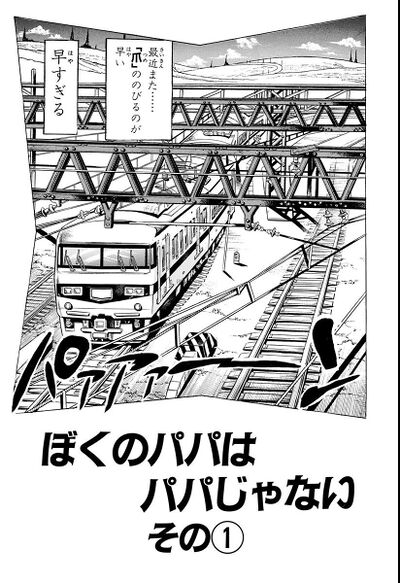 My Dad Is Not My Dad, Part 1 (ぼくのパパはパパじゃない その①, Boku no Papa wa Papa Ja Nai Sono 1), originally A Crisp Feeling! (すがすがしい気分！, Sugasugashii Kibun!) in the WSJ release, is the one hundred forty-fifth chapter of Diamond is Unbreakable and the four hundred tenth chapter of the JoJo's Bizarre Adventure manga.

On a subway going home from work, Kira reads a newspaper while resisting the urge to murder an attention-seeking girl to the left of him. To his right, another girl explains to her boyfriend how she stole from a store as her dad watched in an attempt to get back at him for stalking her.

During the discussion, the girl's handbag touches Kira's leg causing him to push it away. The couple ridicule Kira for touching her bag, assuming him to be some type of thief or pervert. Unfazed, Kira gets off at Morioh Station, but not before the two rush past him and knock his briefcase to the floor. The couple makes fun of Kira's bowling pin-shaped nail clippers and leave.

At the couple's studio apartment, Kira barges through the front door and immediately detonates the boyfriend. After aggressively asking for the girl's name (revealed to be Minako), Kira forces her to cut his nails using the aforementioned nail clippers. He recalls Minako asking her boyfriend for earrings and brings out the boyfriend's severed ears for her to wear. He then detonates all but the girl's hand but is unaware that Hayato is filming the whole thing from the front door. Kira lovingly rubs the hand on his face as he decides to take it home.