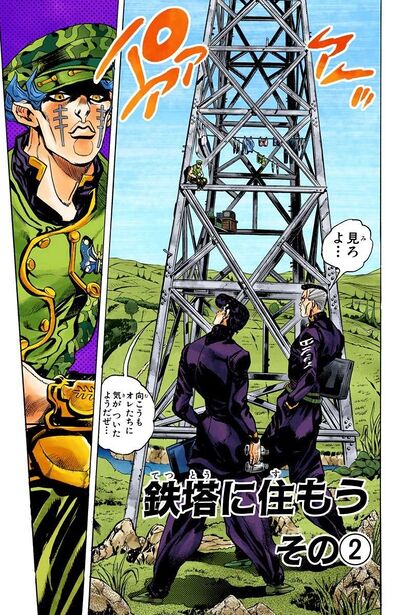 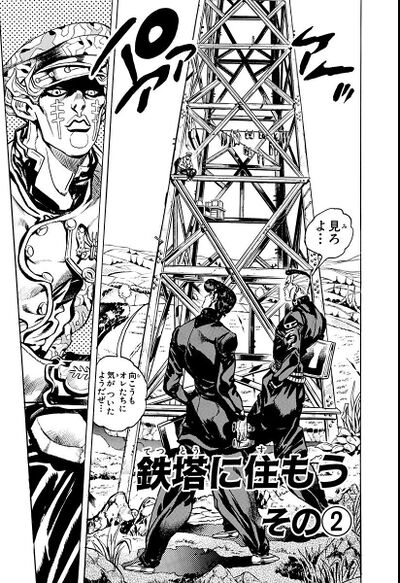 Josuke and Okuyasu face off the inhabitant of the transmission tower but are suspicious of him. Josuke tells Okuyasu to wait for whether the man invites them closer to the tower to determine if he is an enemy, but the latter warns them to stay away, explaining that his toilet is flushing. Josuke and Okuyasu barely avoid being covered in sewage, and the man tells them that he uses his toilet to fertilize his herbs. He further explains that this electric tower is his house and that he bought it when it was decommissioned, converting it into his home with various mechanisms of survival. Thus the man has been living self-sufficiently for three years, to Josuke and Okuyasu's amazement. Both relax, visibly having met a simple eccentric, but Josuke spots a polaroid falling from the tower. Despite the tower's owner's pleas, Josuke approaches after seeing that the polaroid is that of Kira. Angry, Josuke enters the vicinity of the tower but the tower's inhabitant smiles, declaring that he, Toyohiro Kanedaichi and Yoshihiro have trapped him within his Stand, Super Fly. When Yoshihiro tries to flee, Josuke pursues him out of the tower but finds himself transforming into metal. Kanedaichi, also out of the tower, warns him that he is now forced to stay inside lest he becomes part of the tower itself, and prepares to leave Josuke in his new prison.