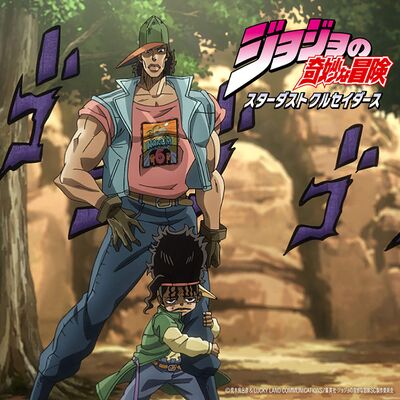 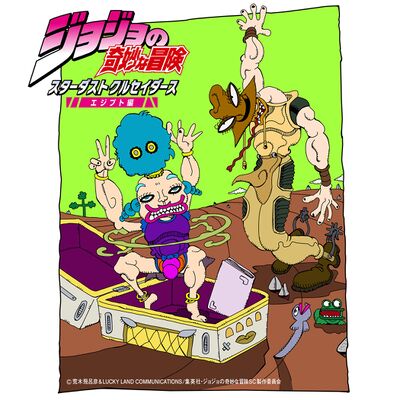 "Akuyaku◇Kyosokyoku" (アク役◇協奏曲, Akuyaku◇Kyōsōkyoku, lit. "Villain Concerto") is an ending theme song for three episodes in the latter half of Stardust Crusaders (Anime). The song is sung by the characters Oingo (Makoto Yasumura), Boingo (Motoko Kumai), and Hol Horse (Hidenobu Kiuchi), and is used as the ending for episodes featuring the characters together in place of the usual ending theme "Last Train Home".

The ending is entirely animated in the style of Tohth's illustrations, beginning first with Oingo and Boingo hanging out of a cartoon airplane with a snake's head which flies off-screen. The airplane is then shown colliding into the orange-bomb Oingo made, bouncing off into a purple moon and finally into a cartoon sun - causing a lollipop to fall out of its mouth. Panning out, the brothers are shown in the deserts of Egypt making rapid arm gestures as they continuously cut closer to the screen. Both brothers raise their hands as money flies into the air, which then transitions to a new page of Tohth with Oingo walking on a sidewalk. Tohth's page turns as Oingo smiles and quickly spins his head clockwise until it transforms into Jotaro's face. Oingo continues this, transforming into Polnareff, Iggy, and Joseph before returning to normal. Oingo's card appears - highlighting his Stand, Khnum. The page turns to reveal Boingo walking down a sidewalk as a box of donuts and binoculars hover behind him. Boingo is shown to be reading from Tohth, transitioning to him sitting on a hillside as his Stand's card also appears.

In a format similar to a manga panel, the brothers both dance together while several cartoonish characters and symbols float by in a background consisting of a pink skyline. Both brothers jump offscreen onto a new page, continuing to dance as multiple prophecy pages from Tohth horizontally scroll by. The screen zooms in on both brother's faces before cutting to another page, where pictures of the comic artist and Jotaro brutally dying hover above a twilight covered sky. Oingo and Boingo continue their rapid arm movements from earlier before transitioning to a panel of the brothers casually pointing at each other. Both brothers are then being beaten up by hired thugs before cutting to them lying in an ambulance, covered in bandages. As the ending comes to a close, the hospital where both brothers recover is shown before fading to black.

Just like the previous version, the ending is entirely animated in the style of Tohth's illustrations except Hol Horse takes the role of Oingo. It begins with Hol Horse holding a suitcase, which contains Boingo tucked in, hanging out of a cartoon airplane that has a snake's head. The plane flies off-screen before crashing into the ground. Panning out, Hol Horse and Boingo are shown in the deserts of Egypt making rapid arm gestures as they continuously cut closer to the screen.

The scene transitions to a new page of Tohth with Hol Horse bobbing his head up and down while shooting Emperor. The tarot card for Emperor then appears beside him. Tohth's page turns as Hol Horse smiles while holding two fingers up, with the text "NO. 2!" behind him. On the next page, Hol Horse is holding two fingers up with both hands while Hol Horse and Boingo smile at each other. However, as Hol Horse questions if he'll really be okay with this kid, Hol Horse's fingers rotate 90 degrees and their smiles both become worried expressions. The page flips again to reveal Boingo running on the sidewalk while inside a suitcase with both of his arms flailing around and Tohth hovering beside him. On the next page, Boingo is shown to be reading from Tohth with an angry and determined expression on his face, as he thrusts his arm into the air and steam blows from his nostrils.

It transitions to an angry Boingo moving his arms up and down while Oingo's head is above him in the clouds. Zooming into Boingo's mouth opening and closing, the text "ZETTAI" and "100%" appear out of his mouth along with the head of a cartoon elephant wearing glasses and sticking its tongue out. On the next page, Hol Horse has a panicked expression while Boingo is smiling, and the two shake their hands up and down.

In a format similar to a manga panel, Hol Horse and Boingo both dance together while looking at each other. Multiple prophecy pages from Tohth horizontally scroll by behind them. The two give each other high fives and then cross over to the opposite side as their backs face each other. While both of them have smug faces with their arms held up high as if they're claiming victory, Avdol, Polnareff, Joseph, and Jotaro are seen spinning rapidly in the background before they each fly off-screen one by one. Hol Horse and Boingo continue their rapid arm movements from earlier before transitioning to a panel of the combo casually raising their arms up at each other.

As it zooms into both of their faces, Hol Horse's face is shot by his own bullets. About to end, it transitions to Boingo walking by himself in a spotlight with his arms in the air. Iggy then appears with a spotlight as well and bites Boingo's butt before it fades to black.

Other languages:
English • português do Brasil
Retrieved from "https://jojowiki.com/index.php?title=Akuyaku◇Kyosokyoku&oldid=730213"
Categories: