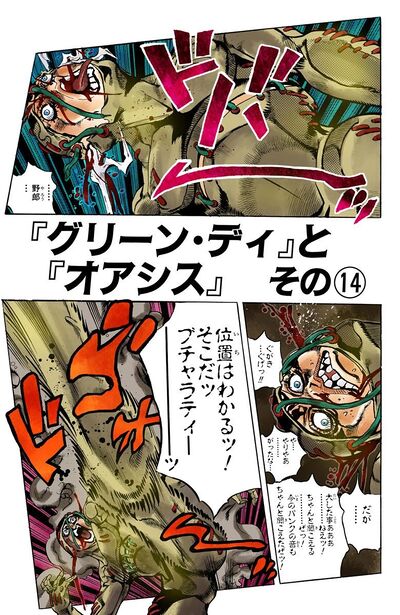 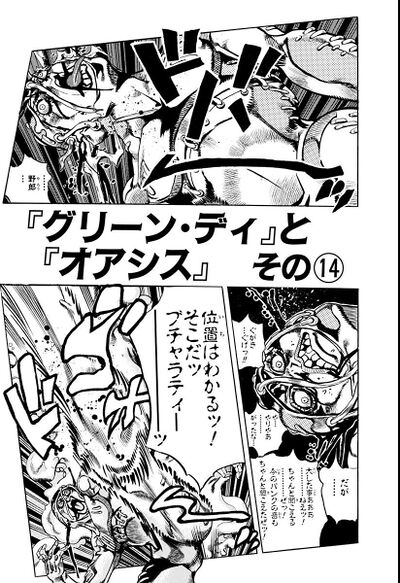 "Green Day" and "Oasis", Part 14 (『グリーン・ディ』と『オアシス』 その⑭, "Gurīn Di" to Oashisu Sono 14), originally It's Happening Again! (また来たよ！, Mata Kita Yo!) in the WSJ release, is the one hundred twenty-eighth chapter of Vento Aureo and the five hundred sixty-seventh chapter of the JoJo's Bizarre Adventure manga.

Secco is disoriented by his loss of hearing; when he confuses a car for Bucciarati, his foot is run over and crushed. He becomes desperate enough to take a random teenage boy hostage and orders him to call a taxi, the hostage being none other than Doppio.

As Bucciarati approaches, Secco begins to melt Doppio, but Sticky Fingers punches through Doppio with a zipper and zips Secco's arm to his neck. This causes Secco to panic and trip into a garbage truck, which finally incapacitates him.

Doppio then approaches Bucciarati to kill him, but remembers that the Boss may wish to know what Bucciarati was after in Rome, and passing as an innocent bystander, proposes Bucciarati to at least accompany him to his destination.