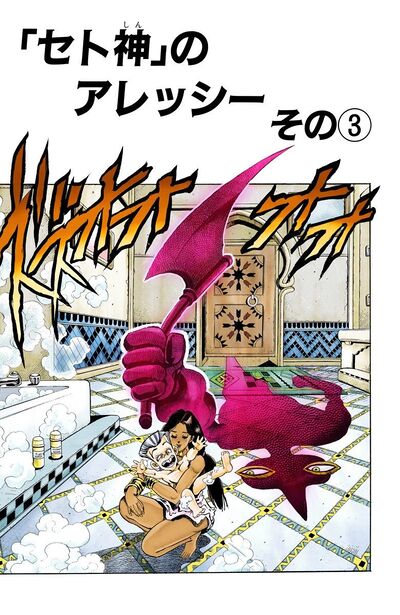 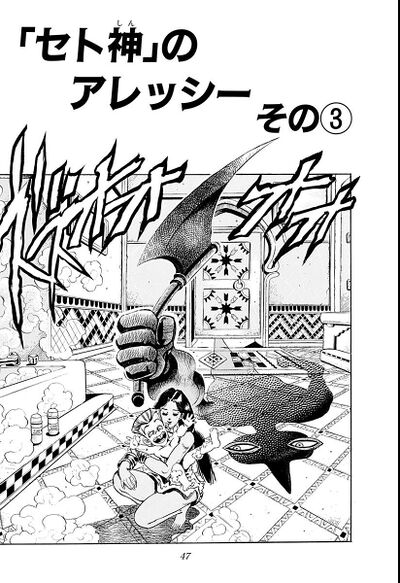 Malèna continues cleaning the child Polnareff, unaware of the approaching Sethan. Right before the Stand can strike, Malèna turns around causing it to retreat back into hiding. She then begins shampooing Polnareff's hair. The shampoo goes into Polnareff's eyes, temporarily blinding him. When he opens his eyes he notices that Malèna is no longer the one shampooing his head, but Alessi instead. Alessi strikes Polnareff with his axe, which is barely blocked by Silver Chariot's child form. Alessi then grabs Polnareff and holds him under the filled bathtub. Polnareff tries pulling the tub's plug, but Alessi clogs the drain with Polnareff's hair. However, as a child Polnareff has no shame, allowing him to defecate within the tub without hesitation. Completely disgusted by the vulgar act Alessi jumps far back from the tub, releasing Polnareff. Polnareff asks what happened to Malèna, to which Alessi reveals that by using Sethan, turned her into a fetus. Alessi then summons Sethan and de-ages Polnareff to four years old. Due to not being in her mother's womb, Malèna will die in a matter of minutes if not returned to normal.

Author's Note
“
And just when you find out the Berlin Wall's fallen, there's a gulf war! In these hectic world affairs, it's all anxious, isn't it～?
”
—Hirohiko Araki
“
ベルリンの壁が崩れたと思ったら、湾岸戦争！目まぐるしい世界情勢に、不安だな～。
”
—Hirohiko Araki