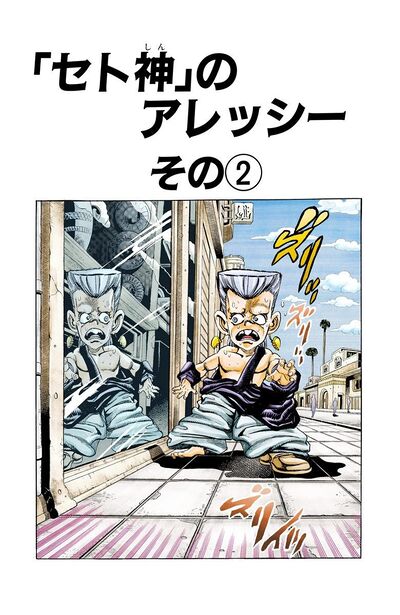 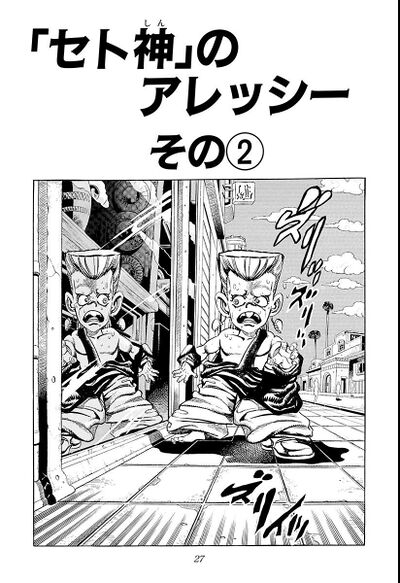 After touching the shadow of Alessi, Polnareff has returned to the form of a child. Despite being unable to remember his name, Polnareff tries running toward Jotaro but is stopped by Alessi. Alessi explains his lust towards abusing the weak, and kicks Polnareff skyward, trapping him in the awning above. Alessi pulls out a shotgun and shoots Polnareff, but the shells are deflected by a child-sized Silver Chariot. Due to being born with it, Polnareff has retained his Stand, however, it is now considerably weaker due to its childish stature. Alessi pulls out an axe, which Sethan uses to attack Polnareff. Silver Chariot quickly launches its blade and strikes Alessi in the shoulder. Amidst the confusion, Polnareff is able to get away. He runs into a young woman named Malèna, who upon seeing the injured child, takes him home to treat his wounds.

At Malèna's house, she prepares a bath for them. At the sudden realization of what is occurring around him, Polnareff, who has retained some of his adult mind, becomes ecstatic. The lady begins cleaning him. As Polnareff enjoys this rare chance of intimacy, Sethan appears from the doorway, with an axe in hand.