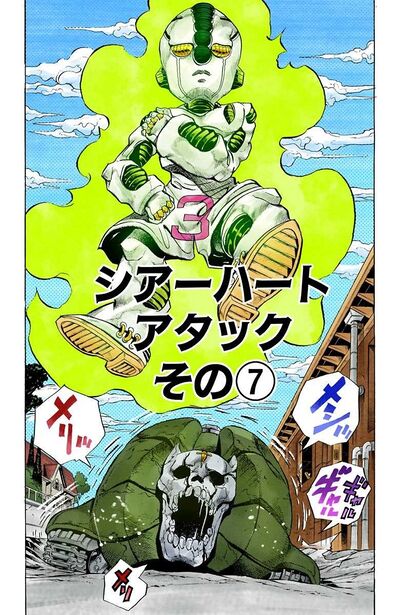 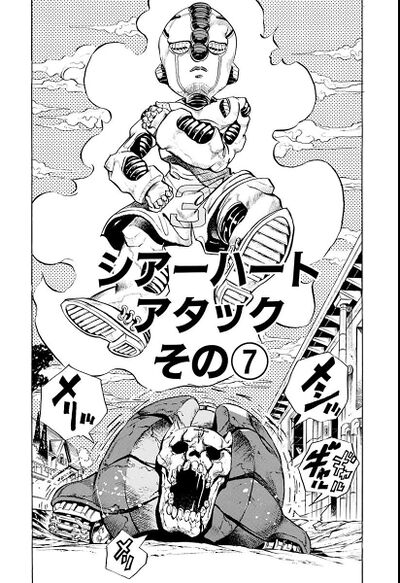 Sheer Heart Attack, Part 7 (シアーハートアタック その⑦, Shiā Hāto Atakku Sono 7), originally The Man Right in Front of Me!! (『目の前』の男!!, "Me no Mae" no Otoko!!) in the WSJ release, is the ninety-fifth chapter of Diamond is Unbreakable and the three hundred sixtieth chapter of the JoJo's Bizarre Adventure manga.

With Sheer Heart Attack completely disabled by its own weight, Echoes ACT 3 explains to its master Koichi its power and capabilities. Koichi, still holding an unconscious Jotaro, waits for reinforcement. Meanwhile, Kira tries to go back to the shoe shop despite his heavy hand, and is approached by two thugs, who mock his strange state. Antagonizing the well-off Kira, they proceed to humiliate him further by tying his shoes together and trying to steal his money. However, Killer Queen blows off one of the thug's finger, allowing Kira to leave in peace while the thugs are left confused and panicked as to what happened.

Koichi sees Sheer Heart Attack beginning to break, and concludes that the user must have been hurt, before seeing a man staggering towards him. When he gets close enough, the man proceeds to chitchat a little before mentioning Josuke, Okuyasu and a few other of Koichi's allies. It is then that Koichi immediately realizes that he is in the presence of the serial killer operating in Morioh.