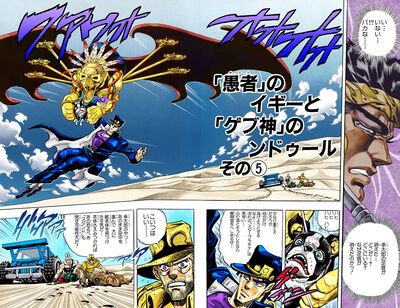 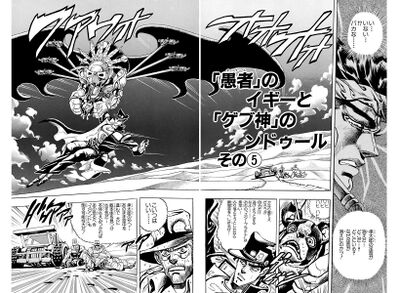 Jotaro hangs onto Iggy as they fly towards their adversary. As the two silently glide towards him N'Doul locates them and begins to panic. However, Jotaro and Iggy's combined weight is too much for The Fool and they begin descending closer and closer to the ground. To gain altitude Jotaro uses Star Platinum to kick at the ground which sends them flying upwards at the cost of N'Doul now knowing their position. Geb begins chasing after Jotaro as he uses Star Platinum to locate the enemy who is four hundred meters away. To locate their exact position, Geb starts throwing sand into the air and using it as a form of sonar. Geb strikes at Jotaro, wounding his shoulder. In an attempt to save himself Iggy flies Jotaro towards Geb. However before Geb can attack, Star Platinum throws Iggy at N'Doul. To protect himself N'Doul brings Geb back from Jotaro's location. N'Doul and Iggy both summon their Stands and save themselves, but in the chaos, N'Doul loses track of Jotaro's location. As N'Doul searches for Jotaro, Jotaro reveals that he is now standing right behind him.