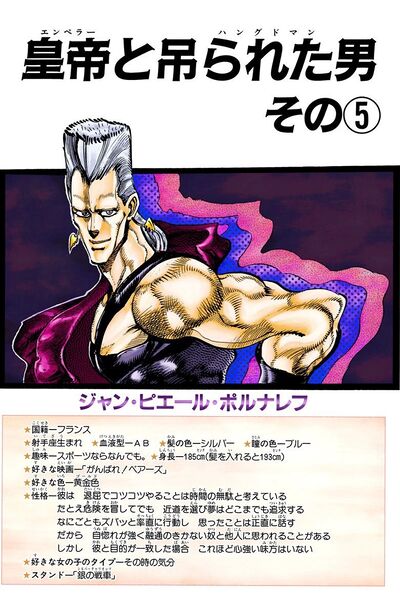 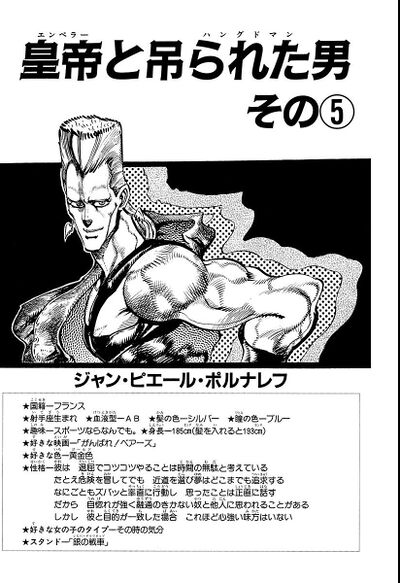 Emperor and Hanged Man, Part 5 (と その⑤, Enperā to Hangudo Man Sono 5), originally A Small Light Figure in the Eye (光小さき者の瞳, Hikari Chiisakimono no Hitomi) in the WSJ release, is the thirty-first chapter of Stardust Crusaders and the one hundred forty-fourth chapter of the JoJo's Bizarre Adventure manga.

In the jeep, Kakyoin and Polnareff discuss how they can defeat Hanged Man and whether a world in the mirror really exists. In the middle of the conversation, Kakyoin notices Hanged Man inside a metal part of the steering wheel. He hits the brakes to avoid the Stand, and the jeep flips over. At that moment, Polnareff sees Hanged Man jumping from one reflective surface to another.

Now that they know how Hanged Man works, they try to hide from all reflective surfaces. A boy trying to sell medicine approaches them, unaware that Hanged Man has moved into his eye. The Stand challenges them to cut the child's eye out, but Polnareff kicks sand into his eyes instead, forcing Hanged Man to move into the only reflective view available: Polnareff's eye. Since he can now predict Hanged Man's trajectory, Polnareff easily cuts the Stand before it manages to enter his eye. They hear J. Geil screaming at a distance and swear to avenge both Avdol and Sherry.