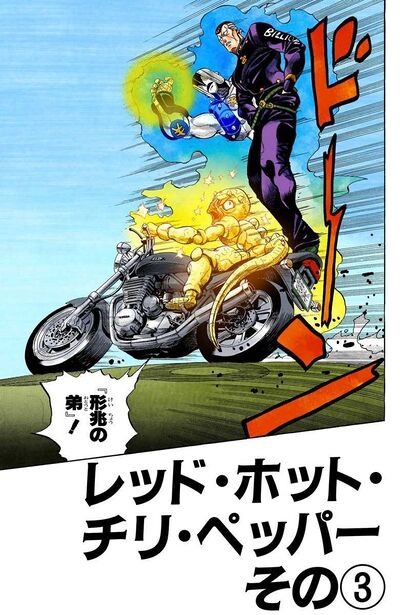 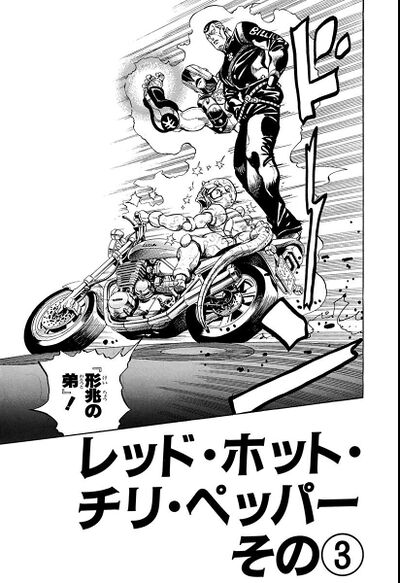 On the motorcycle, The Hand swings toward Red Hot Chili Pepper, which easily evades being erased. It temporarily gloats about being too fast for Okuyasu, but the latter reveals that he's been aiming for the motorcycle all along. The motorcycle is now destroyed and Red Hot Chili Pepper finds itself far from any power source, unable to escape. Josuke and Koichi have observed everything from far away, and are awed by Okuyasu's quick thinking, but Jotaro warns them that the enemy is still dangerous.

Okuyasu demands that Red Hot Chili Pepper reveals who and where its user is, only for it to defy the delinquent, still confident in its strength and speed. Okuyasu attacks and swipes with The Hand, but Red Hot Chili Pepper avoids the attack and punches Okuyasu in the stomach. It is distracted by the sight of Jotaro, Koichi, and Josuke coming, and realizes too late that Okuyasu teleported himself behind it. Red Hot Chili Pepper cannot avoid The Hand, which repeatedly kicks it into the ground and knees it away. The Hand then tries to erase Red Hot Chili Pepper, forcing it to roll out of the way. Okuyasu comments that the Stand is getting slower, and its appearance slightly changes, having lost its brilliance for a rusted color. Red Hot Chili Pepper is depowered as the whole group is cornering it, but it then asks Okuyasu what he is going to do: wait for Jotaro or finish it off immediately, adding that it may be feigning weakness and that it may plan to kill Jotaro.