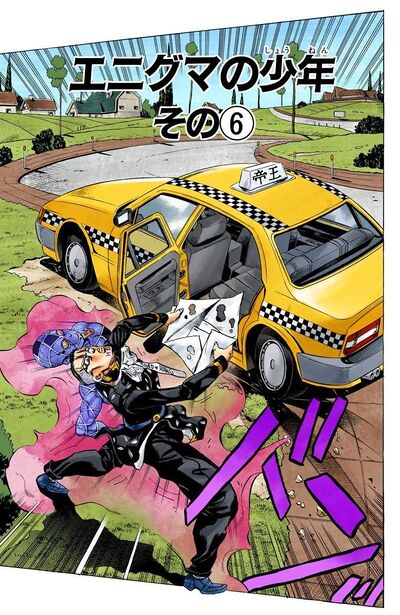 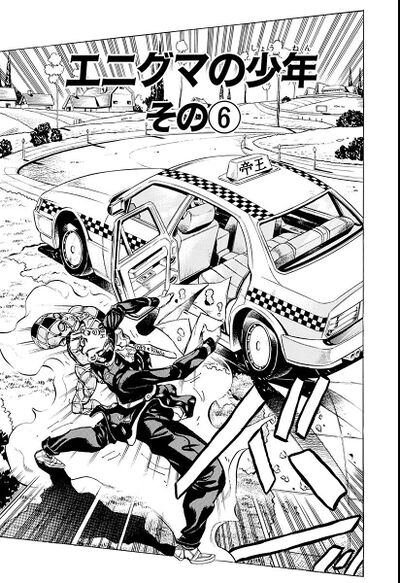 Yuya opens up one of the papers and ends up being electrocuted. However, the cause of the metallic smell that he sniffed earlier was actually a paper shredder concealed within the paper. The shredder wouldn't turn off, causing Josuke and Koichi's papers to begin getting eaten by the shredder.

Highway Star attempts to break the shredder but its fists aren't strong enough. Out of options, Yuya touches his chin, and Terunosuke reveals himself before turning Yuya into paper. Terunosuke boasts about Enigma's power, but Yuya mentions that he let himself lose on purpose. By turning into paper, he was thin enough to grab Josuke and Koichi's papers out of the shredder.

The papers open up and Crazy Diamond punches Terunosuke in the face. Terunosuke threatens to rip Yuya's paper in half, but Echoes ACT 3 makes him heavy. Josuke mentions again that he hates people like Terunosuke, who threaten people with hostages. Terunosuke says he only scared people to practice his observation and that he was trying to master his Stand since he just got it, but he realizes that it was wrong now.

Josuke doesn't listen to Terunosuke's 'change of heart' and taunts him with his own tactic, by saying Terunosuke squints one eye when he's afraid, but squints both when he's really terrified. Crazy Diamond rapidly punches Terunosuke several times and fuses him to paper from the paper shredder, which transforms him into a book. Later, Josuke donated the book to the Morioh Library without reading it. It's one-of-a-kind with the title "Enigma", and can't be taken home from the library. It's said that while reading it, one could occasionally hear faint voices.