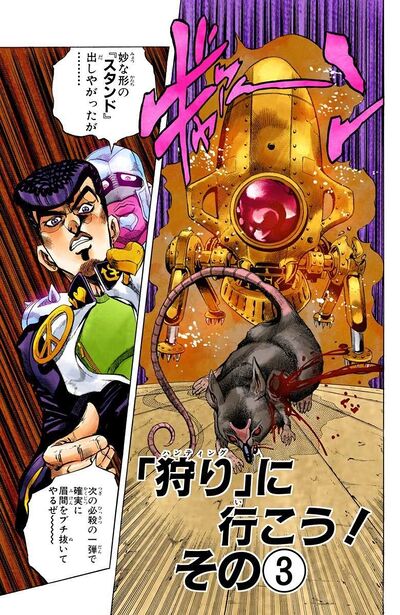 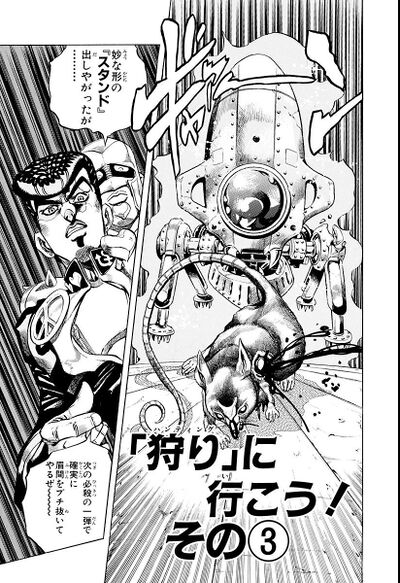 Josuke and the rat face each other, but the rat suddenly tries to hide under the table. Determined not to let it escape or lose his cool, Josuke has Crazy Diamond kick the table away and calls Jotaro. The rat flees behind a chair, and reveals that its Stand is in fact a cannon equipped with a scope, and shoots a dart toward Josuke, who also flicks a marble at the rat. Josuke hits the rat and protects himself with a pan, and the rat emerges, dead.

Jotaro comes into the kitchen, but reveals that they are still in a difficult position as another rat has attacked him, and his hand is melting due to Star Platinum catching the dart with its hand. Josuke heals Jotaro and briefly wonders if the rat has had children, but Jotaro assures that it is too late. A call to the Speedwagon Foundation reveals that Otoishi has indeed pierced two rats. Jotaro then requests that the foundation blocks every gutter around the farm, as they will corner the second rat before the night. Josuke is skeptical that they can find it in the vast fields around them, but Jotaro explains that a rat has favorite tracks and needs to eat constantly, and manages to find a trail.

(Death of Not Bug-Eaten's)
Ratt