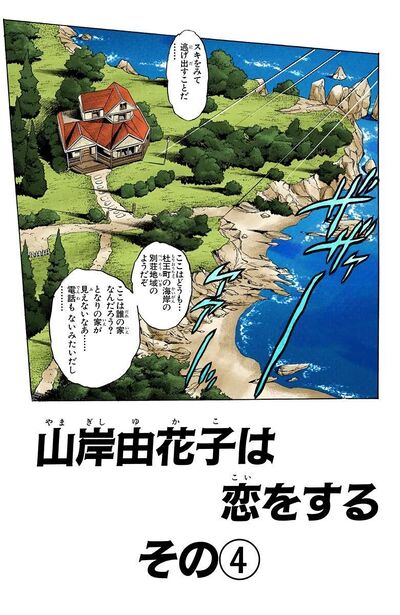 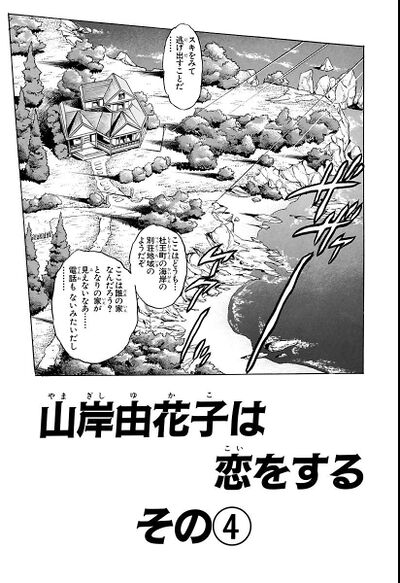 It is 6:00 AM and Koichi is trapped with Yukako in a house he doesn't know, but he can see the ocean. Koichi realizes he's hungry as Yukako serves a copious breakfast. Knowing she's a Stand user who must have been pierced by Keicho, he decides to play along until an opportunity presents itself. However, when he sits on the table, Yukako stops him and hides the breakfast behind three boxes, being determined to beat English into him. Not listening to Koichi's protests, she sets a quiz and asks the first question: "The musical artist Prince often sings about 'funky music'. Choose the best definition for 'funky music'?"

Koichi chooses correctly by selecting B, which pleases Yukako greatly. But his mood reverses back into worry when she reveals an eraser and the bar of soap she would have made him eat if he was wrong. Yukako carries on to the second question but she understands that Koichi is now choosing by the expression of her face. Angry she tries to force Koichi to eat asparagus rolled in strips of dictionary pages.

Koichi has had enough of the farce and tries to jump through the window. However, Yukako has already planted strands of her hair on Koichi's head and restrains him. Yukako reveals that the house is owned by a CEO in Tokyo and since no one will know until summer, they'll have plenty of time to 'make progress'. Yukako then leaves Koichi with his meal. Meanwhile, Okuyasu and Josuke have noticed that Koichi has disappeared but they have no clue to where he may be, so they can only try to think of a possible hiding spot.

For his part, Koichi cannot open the door of the family room as the lock has a combination which is the answer to the following question: "In what year did Columbus discover the New World?", a question Koichi is unable to solve.