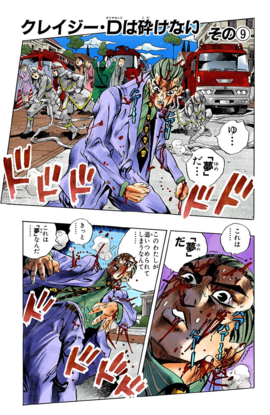 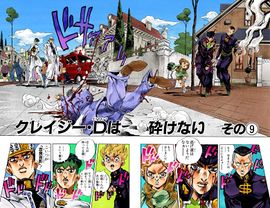 Crazy Diamond Is Unbreakable, Part 9 (クレイジー・は砕けない その⑨, Kureijī Daiyamondo wa Kudakenai Sono 9), originally Those Who Know Your Identity! (正体を知った者！, Shōtai o Shitta Mono!) in the WSJ release, is the one hundred seventy-first chapter of Diamond is Unbreakable and the four hundred thirty-sixth chapter of the JoJo's Bizarre Adventure manga.

Kira, now mentally broken, in denial and believing his defeat to be nothing but a bad dream, collapses in the middle of the road. The gang informs Kira that this is the end for him, while Jotaro and the others realize this man is Kira and the battle is already finished. The fire department sections off the road, believing Killer Queen's explosions to be from gas lines. A paramedic sees the wounded Kira and calls an ambulance for him while telling him help is on the way. Hayato tells Okuyasu not to let any civilians get close to Kira, but Kira grabs the paramedic's hand and primes it as a bomb.

Rohan tells Jotaro they'll need his Star Platinum: The World to stop time, but Jotaro has to get closer first. Josuke warns Kira that if he detonates the hostage, he'll just heal her as he did with Hayato. Hayato, however, recognizes Kira's desperation. He warns the others of Kira's secret power, Bites the Dust that allows him to turn back time by having his identity revealed. Kira, having indeed primed the paramedic with Bites the Dust, compliments her hand and rubs it against his face to calm down.

Kira proceeds to tell the woman his sexual arousal to hands, starting back as a child when he first saw the Mona Lisa. Kira then reveals his full name and the forty-eight murders he's committed to the paramedic. With Bites the Dust starting up, Killer Queen readies the switch as the gang rush into the street to stop Kira. Josuke calls out to his friends, yelling at them to stop him at any cost. Kira activates the switch, causing Bites the Dust to carry him back in time. Realizing that he's successfully escaped, healed and alone at last, Kira cackles victoriously at defeating his enemies.