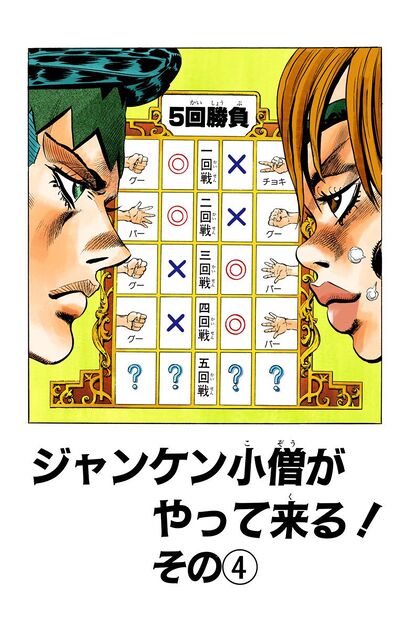 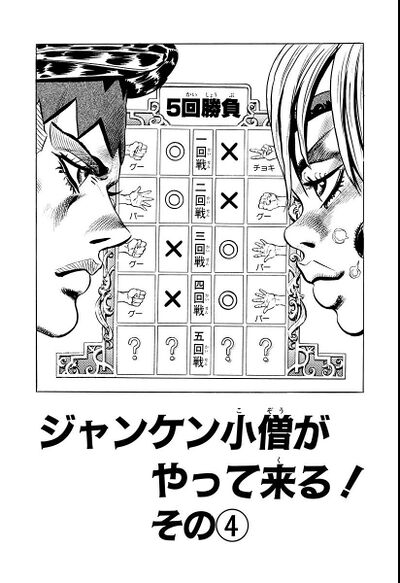 Ken has won against Rohan in their fourth round of rock paper scissors. Boy II Man steals another third of Heaven's Door, making Rohan unable to stand on his feet. When he pridefully leans against a tree, wanting to win while looking down on Ken, the boy retorts that he is the one on the rise and Rohan's luck is dropping. Yoshihiro observes the whole scene from the top of a tree and gloats about his certain victory. For his part, Rohan begins to psyche Ken too, claiming that he will not throw paper for the next round.

Reasoning that his unlucky move is rock, Rohan says that there's no way he'd use it again, which Ken must have realized. Rohan and Ken both jump high in the air and begin the fifth round: both throw paper, ending in a tie, but Rohan remarks that Ken hasn't been psyched up as he expected. They begin another round. Unfortunately, Ken settles for paper and Rohan for rock, but Rohan stumbles, since his legs are weak, and during the small delay, Ken has second thoughts and throws rock, resulting in another tie when he would have won.