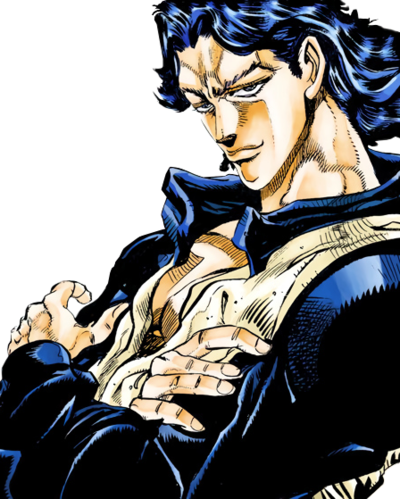 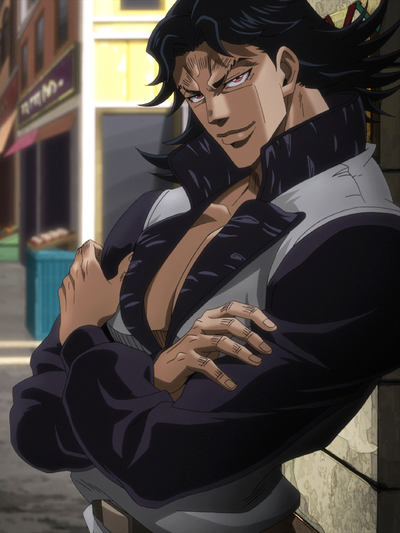 Heritage for the Future
Diamond Records (Playable)
“
Lord DIO never trusts anyone. I've come to make sure you never speak...ever again. And as for you four over there, I'll be taking your lives as well.
”
—Steely Dan, Chapter 160: Lovers, Part 1

Steely Dan is a well built man of average height, with shoulder length hair that frays out at the back and multiple irises with a ripple pattern on his eyes. He wears an open collar shirt extending below his waist with the sides split, resemebling a loincloth on the front and back. The sleeves of Steely Dan's shirt along with his pants are dark.

He takes a great deal of joy out of cruelty, watching Enya as she brutally dies, while sitting and drinking tea. When he takes hostage of Joseph, he forces Jotaro to carry out his orders and torments him in a number of ways. He steals Jotaro's wallet, makes him position as a 'bridge' to walk on,[2] forces him to scratch his back and clean his shoes, all while repeatedly taunting him.[3] However, despite his seemingly overwhelming advantage, he is shaken by Jotaro's threat to pay what he was owed.[4] This cowardly trait is brought to the forefront at the very end of the fight, where he pleads for forgiveness and begs Jotaro to let him go.[5] 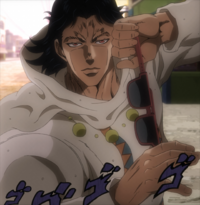 Steely Dan's localized name was originally "Rubber Soul", after the Beatles album. However, because Rubber Soul was given to another Stand User, it was later changed to "Dan of Steel". This is a pun on the common nickname associated with Superman, "Man of Steel", as well as a literal translation the kanji of his name, "Hagane-iri no Dan" (鋼入りのダン).

Steely Dan appears in Diamond Records as an assist character. He has one 'Solitary' type 3 star assist statue. As a 3 star assist, Steely Dan does not appear in gameplay and only functions a as stat boost for the playable statue he is equipped to. However, like all assist characters, he may provide extra effects to the player based on active assist links (Action Battle mode only).