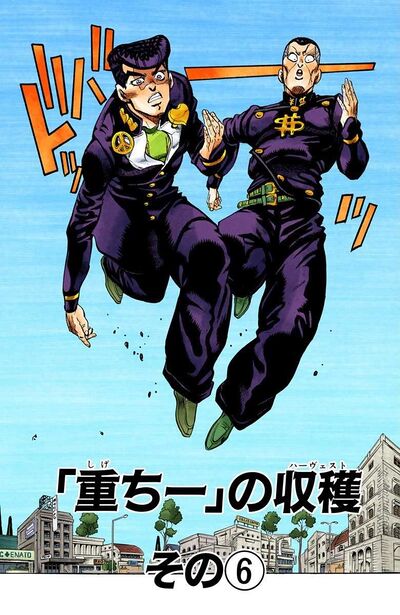 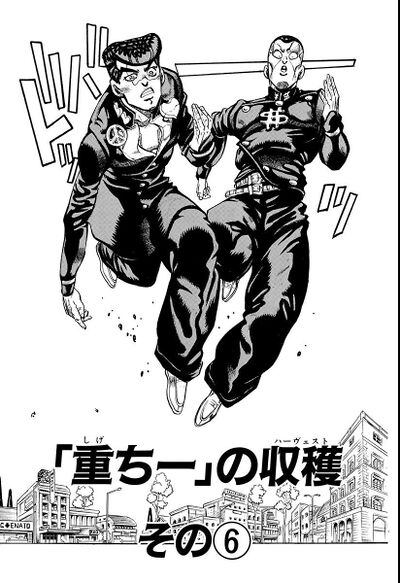 Josuke and Okuyasu are now pursuing Shigechi, who stole their check worth 5,000,000 yen. Being obese, Shigechi is slowly being caught on by the two of them, and he seemingly trips. Harvest then appears beneath him and the multitude of Stands lift him from the ground and run in his place, making him faster and enabling him to go up a building's walls. However, Josuke has the idea of using Crazy Diamond to throw Okuyasu up in the air, enabling them to help each other get to the top of the building as well.

When they arrive at the top of the building, they see Shigechi and pursue him, walking on top of pipes connecting the building with the one Shigechi is on. Harvest has however collected the nuts and bolt maintaining the pipes, making them fall but Josuke uses Crazy Diamond to repair them, enabling him and Okuyasu to join Shigechi. Suddenly, Josuke feels dizzy and sees double. Unable to even stand, Josuke realized that Harvest has another ability. Shigechi explains that he injected alcohol directly into their bloodstream with Harvest in order to make them drunk. He then surrounds them with Harvest and one of the Stands punches into Okuyasu's eyeball. This last move infuriates Josuke who deems himself not responsible for his actions anymore.