Another One Bites the Dust, Part 4 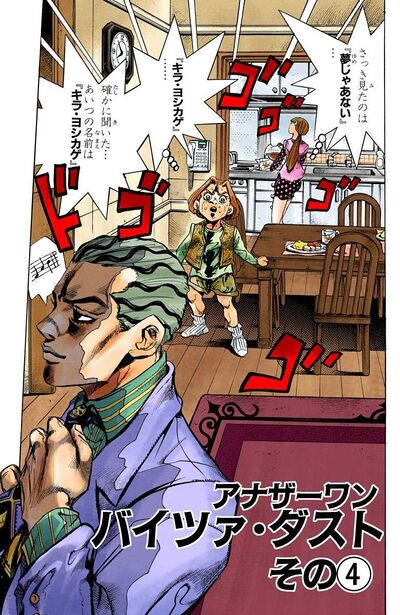 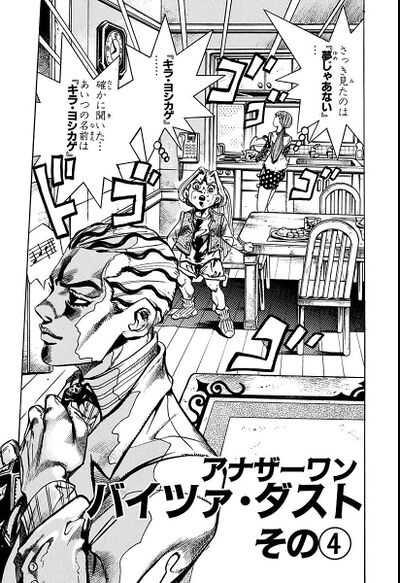 Hayato realizes that the morning is repeating, and remembers that he has learned Yoshikage Kira's name. When Shinobu drops the Wedgwood tea set as she rushes to the phone, Hayato manages to catch it. She is relieved but tells him that he should answer her when she speaks to him.

While Shinobu is on the phone, Kira tells Hayato that, since he is obviously repeating the morning, someone must have been blown up by Bites the Dust. Kira explains that Bites the Dust will automatically activate when anyone learns his name from Hayato. Hayato replies that he didn't tell anyone. Kira guesses from this that Rohan must have used his Stand to learn it on his own. He tells Hayato that Rohan is now fated to die in this loop as well.

As Kira leaves, he again asks Shinobu for a goodbye kiss, to Hayato's distress. Just before their lips touch, Hayato pushes the tea set off the table and it shatters. Shinobu yells at him, asking if he enjoys making her unhappy. Kira leaves through the front door, after exchanging glares with Hayato.

Instead of being caught by Kira at the door, Hayato slips out the window instead and makes his way to Rohan, planning to avoid being seen and make contact with any allies Rohan might have. However, as he watches Rohan from behind a corner, his face opens up like a book, due to the effects of Heaven's Door. The events that were written in his memories on the previous morning begin to happen again, and as the rain starts to fall. Kira approaches him from behind and tells him that everything "destroyed" in the previous time loop is fated to be destroyed in this one as well, including Rohan.