Another One Bites the Dust, Part 7 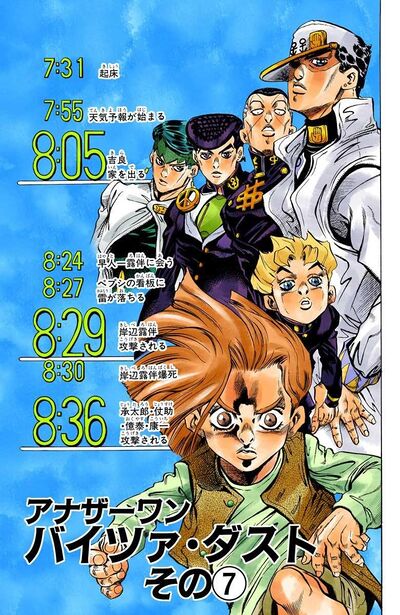 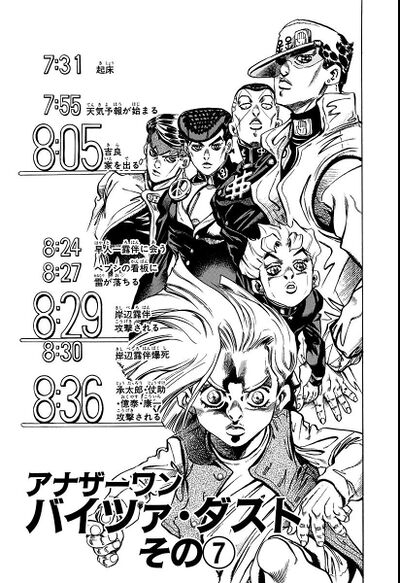 Another One Bites the Dust, Part 7 (アナザーワン バイツァ・ダスト その⑦, Anazāwan Baitsa Dasuto Sono 7), originally There's No Time Left! (もう時間がない！, Mō Jikan ga Nai!) in the WSJ release, is the one hundred fifty-ninth chapter of Diamond is Unbreakable and the four hundred twenty-fourth chapter of the JoJo's Bizarre Adventure manga.

Hayato tests the power of Stray Cat, having already figured out that sunlight causes the plant to fire its air bullets. He confirms that it has enough destructive power to blow a hole in a dictionary, and stores it in his backpack. He decides not to attack Kira in the house, to avoid possibly hurting his mother. Remembering that Kira approached him from behind with his hat, he decides that is the best moment to carry out his plan.

Downstairs, Hayato tells Shinobu that his "father" wants another cup of coffee. He waits by the phone and answers it when it rings. As Kira drinks his second cup of coffee, the Wedgwood china shatters and the coffee spills. As on the previous two mornings, Shinobu is upset over her china, but moments later Hayato kisses her goodbye and promises silently to protect her. He glares at Kira and departs, making sure to leave his hat by the door. Shinobu is pacified, and cleans up the spill, saying that the china is replaceable.

Hayato hurries to the spot where he watched Rohan blow up, but Kira is yet to arrive. Looking behind him, Hayato sees Kira waiting behind a tree. Hayato's actions at home made him suspicious, and he is unwilling to approach. Realizing that he is running out of time before Rohan dies, Hayato prepares Stray Cat in his backpack.

Other languages:
English • português do Brasil
Retrieved from "https://jojowiki.com/index.php?title=Chapter_424&oldid=676907"
Category: