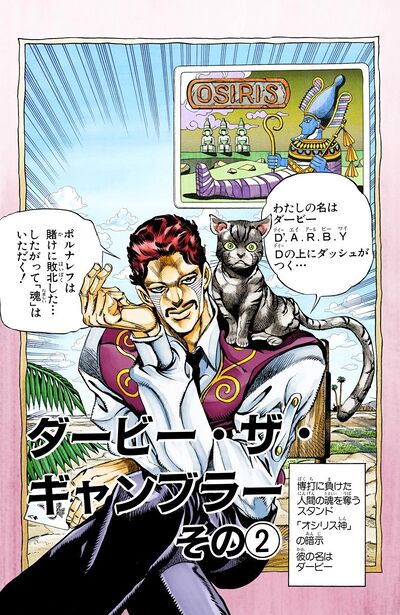 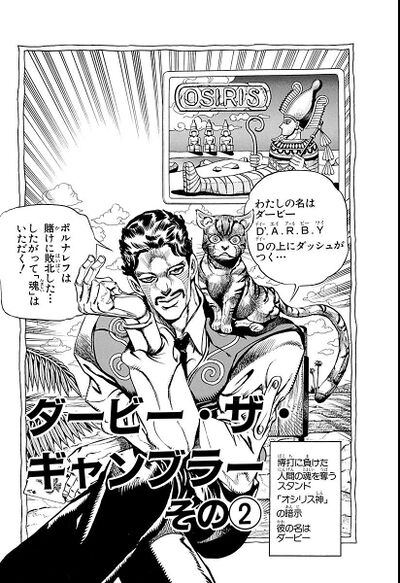 Due to losing the bet with D'Arby, Polnareff has forsaken his soul to Osiris, the deity of death and resurrection. Osiris grabs Polnareff's soul and presses it into a poker chip. Feeling intense rage, Avdol grabs D'Arby and antagonizes him for cheating. D'Arby responds that cheating is fair if you don't get caught, and that those who whine about it are sore losers. D'Arby warns the group that if they kill him, Polnareff will die along with him. Showing the group his collection of soul chips, D'Arby tells them that the only way to defeat this Stand user is to gamble more. Joseph clears the poker table and sets down a glass filled to the brim with alcohol. Joseph asks "Barby" if he knows what surface tension is. After correcting Joseph's mistake, D'Arby explains that it's the force that keeps the liquor from flowing over. The next bet is simple; Joseph and D'Arby will put coins into the glass until it overflows, whoever causes it to overflow is the loser. D'Arby quickly inspects the glass and the gambling begins. D'Arby goes first, inserting five coins. Joseph then inserts one, but secretly adds more liquor to the glass in the process. Joseph tells "Obi" that it is now his turn, infuriating D'Arby. With the added liquor, even inserting one coin will cause the glass to overflow, giving Joseph much confidence.